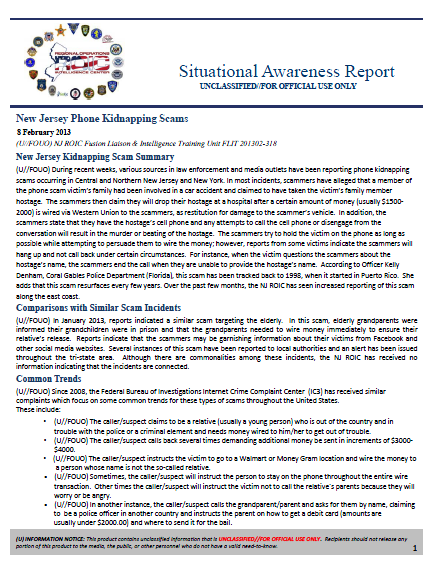 (U//FOUO) During recent weeks, various sources in law enforcement and media outlets have been reporting phone kidnapping scams occurring in Central and Northern New Jersey and New York. In most incidents, scammers have alleged that a member of the phone scam victim’s family had been involved in a car accident and claimed to have taken the victim’s family member hostage. The scammers then claim they will drop their hostage at a hospital after a certain amount of money (usually $1500‐2000) is wired via Western Union to the scammers, as restitution for damage to the scammer’s vehicle. In addition, the scammers state that they have the hostage’s cell phone and any attempts to call the cell phone or disengage from the conversation will result in the murder or beating of the hostage. The scammers try to hold the victim on the phone as long as possible while attempting to persuade them to wire the money; however, reports from some victims indicate the scammers will hang up and not call back under certain circumstances. For instance, when the victim questions the scammers about the hostage’s name, the scammers end the call when they are unable to provide the hostage’s name. According to Officer Kelly Denham, Coral Gables Police Department (Florida), this scam has been tracked back to 1998, when it started in Puerto Rico. She adds that this scam resurfaces every few years. Over the past few months, the NJ ROIC has seen increased reporting of this scam along the east coast.

(U//FOUO) In January 2013, reports indicated a similar scam targeting the elderly. In this scam, elderly grandparents were informed their grandchildren were in prison and that the grandparents needed to wire money immediately to ensure their relative’s release. Reports indicate that the scammers may be garnishing information about their victims from Facebook and other social media websites. Several instances of this scam have been reported to local authorities and an alert has been issued throughout the tri‐state area. Although there are commonalities among these incidents, the NJ ROIC has received no information indicating that the incidents are connected.

(U//FOUO) Since 2008, the Federal Bureau of Investigations Internet Crime Complaint Center (IC3) has received similar complaints which focus on some common trends for these types of scams throughout the United States.

How to Prevent the Scam

What To Do If You Receive Such a Call