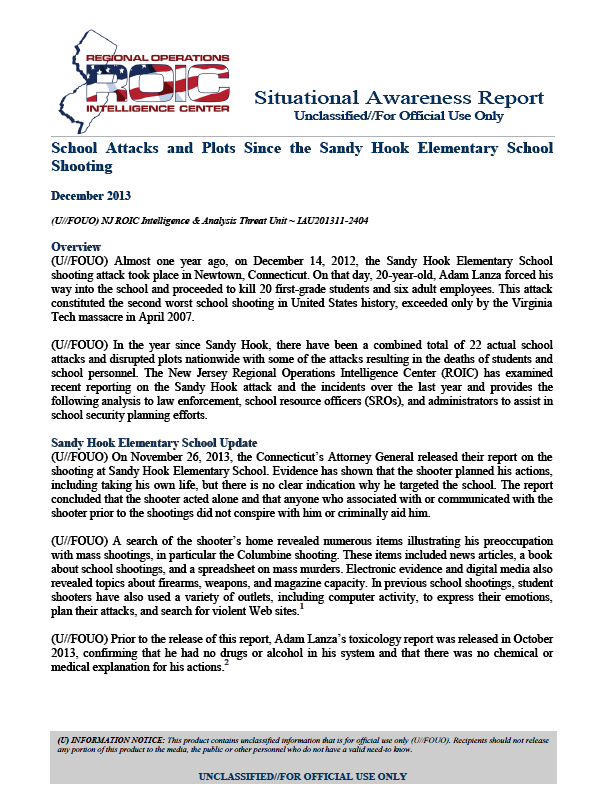 (U//FOUO) Almost one year ago, on December 14, 2012, the Sandy Hook Elementary School shooting attack took place in Newtown, Connecticut. On that day, 20-year-old, Adam Lanza forced his way into the school and proceeded to kill 20 first-grade students and six adult employees. This attack constituted the second worst school shooting in United States history, exceeded only by the Virginia Tech massacre in April 2007.

(U//FOUO) In the year since Sandy Hook, there have been a combined total of 22 actual school attacks and disrupted plots nationwide with some of the attacks resulting in the deaths of students and school personnel. The New Jersey Regional Operations Intelligence Center (ROIC) has examined recent reporting on the Sandy Hook attack and the incidents over the last year and provides the following analysis to law enforcement, school resource officers (SROs), and administrators to assist in school security planning efforts.

(U//FOUO) On November 26, 2013, the Connecticut’s Attorney General released their report on the shooting at Sandy Hook Elementary School. Evidence has shown that the shooter planned his actions, including taking his own life, but there is no clear indication why he targeted the school. The report concluded that the shooter acted alone and that anyone who associated with or communicated with the shooter prior to the shootings did not conspire with him or criminally aid him.

(U//FOUO) A search of the shooter’s home revealed numerous items illustrating his preoccupation with mass shootings, in particular the Columbine shooting. These items included news articles, a book about school shootings, and a spreadsheet on mass murders. Electronic evidence and digital media also revealed topics about firearms, weapons, and magazine capacity. In previous school shootings, student shooters have also used a variety of outlets, including computer activity, to express their emotions, plan their attacks, and search for violent Web sites.

(U//FOUO) Prior to the release of this report, Adam Lanza’s toxicology report was released in October 2013, confirming that he had no drugs or alcohol in his system and that there was no chemical or medical explanation for his actions.

Key Findings of School Attacks and Plots in 2013

(U//FOUO) The following patterns and characteristics have been identified across the nation in school shootings and plots that have occurred in 2013:

• Male students between the ages of 14 and 28 conducted a majority of attacks. The remaining incidents were conducted by adult males ages 30 and above.
• Two attacks involved the shooter committing suicide.
• Several types of schools have experienced an attack or plot; these include elementary schools (six), high schools (ten), and higher education facilities (six).
• Students using a single firearm conducted a majority of the attacks.
• Several shootings have occurred outside the school, and in some of those cases, SROs and administrators have intervened to halt the attacker.

(U//FOUO) In several incidents, an SRO, teacher, or administrator has subdued a shooter or disrupted a plot by discovering a student’s disturbing writings. Fellow students are also a crucial component in recognizing and reporting “warning signs” from other classmates. School personnel who take quick and appropriate action to prevent an attack from escalating demonstrate the value of properly trained employees. The ability to prevent an attack is also possible when school personnel report a student’s threatening language and writing to their supervisors and law enforcement, who can then investigate the threat.

Examples of quick action taken by school officials include:

(U) On October 21, 2013, a student at Sparks Middle School, in Sparks Nevada killed a math teacher and wounded two students outside the school. The teacher, prior to being killed, confronted the shooter allowing other students the opportunity to run to safety.

(U) On September 28, 2013, a Stonewall Jackson High School SRO, in Edinburg, Virginia, obtained information about a student planning an attack in spring 2014. Once law enforcement received this information, the student was arrested and charged with one felony count of conspiring and aiding and abetting acts of terrorism.

(U) On August 30, 2013, after a student shooter wounded a 15-year old at Carver High School in Winston-Salem, North Carolina, an SRO apprehended and arrested the student.

(U) On January 31, 2013, an off-duty Atlanta police officer who was working part-time as an SRO at Price Middle School in Atlanta, Georgia, disarmed a 15-year-old student shooter after he shot and wounded a 14-year-old student in the neck.

(U) On January 4, 2013, a teacher at Russell County High School in Seale, Alabama, discovered a student’s notebook that described his attack plan. While the student claimed that his journal was a work of fiction, law enforcement discovered at his residence several containers filled with pellets, with holes drilled for fuses.

(U//FOUO) While Adam Lanza used only one firearm – a .223-caliber Bushmaster semiautomatic rifle – to kill his victims, he also brought two handguns with magazines and a shotgun that he left in a car outside the school. In the past year, the majority of students who attacked their school had access to a weapon with limited ammunition. While several shooters injured and/or killed their victims, the number of fatalities did not parallel the number of deaths at Sandy Hook.

(U//FOUO) In 2013, the number of fatalities in actual attacks was also largely contingent upon the shooters’ motives with regard to whether they were interested in targeting a single person or attacking a large number of victims. Analysis has shown that a shooter with a grudge against a specific classmate or school administrator usually uses one weapon with limited ammunition to only kill or harm the intended victims. In contrast, school shooters who are interested in attacking as many victims as possible were often found to be in possession of more than one weapon, with extra ammunition.

(U//FOUO) The following list provides information regarding the plots and attacks that have occurred since December 2012: