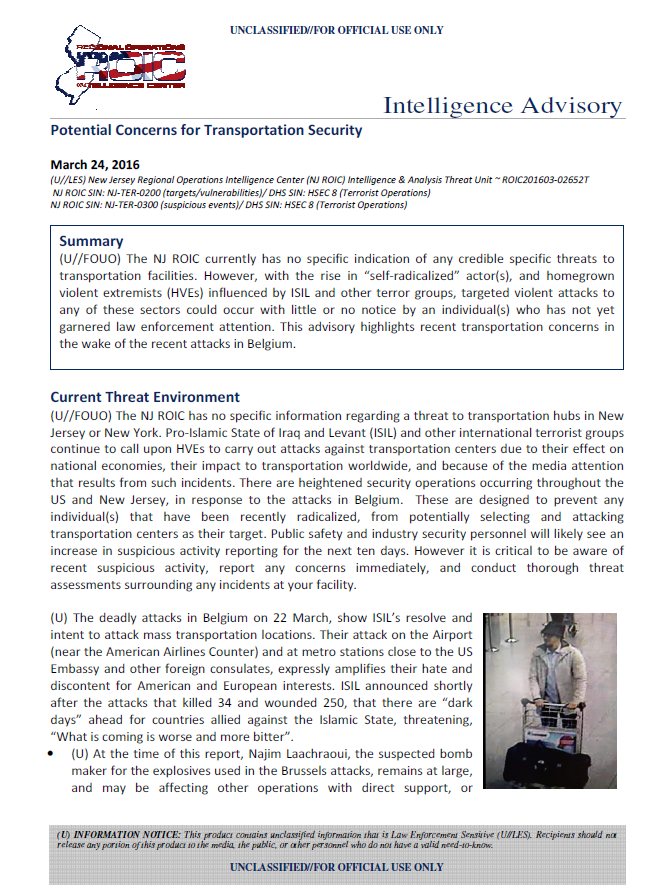 (U//FOUO) The NJ ROIC currently has no specific indication of any credible specific threats to transportation facilities. However, with the rise in “self-radicalized” actor(s), and homegrown violent extremists (HVEs) influenced by ISIL and other terror groups, targeted violent attacks to any of these sectors could occur with little or no notice by an individual(s) who has not yet garnered law enforcement attention. This advisory highlights recent transportation concerns in the wake of the recent attacks in Belgium.

(U//FOUO) The NJ ROIC has no specific information regarding a threat to transportation hubs in New Jersey or New York. Pro-Islamic State of Iraq and Levant (ISIL) and other international terrorist groups continue to call upon HVEs to carry out attacks against transportation centers due to their effect on national economies, their impact to transportation worldwide, and because of the media attention that results from such incidents. There are heightened security operations occurring throughout the US and New Jersey, in response to the attacks in Belgium. These are designed to prevent any individual(s) that have been recently radicalized, from potentially selecting and attacking transportation centers as their target. Public safety and industry security personnel will likely see an increase in suspicious activity reporting for the next ten days. However it is critical to be aware of recent suspicious activity, report any concerns immediately, and conduct thorough threat assessments surrounding any incidents at your facility.

(U) The deadly attacks in Belgium on 22 March, show ISIL’s resolve and intent to attack mass transportation locations. Their attack on the Airport (near the American Airlines Counter) and at metro stations close to the US Embassy and other foreign consulates, expressly amplifies their hate and discontent for American and European interests. ISIL announced shortly after the attacks that killed 34 and wounded 250, that there are “dark days” ahead for countries allied against the Islamic State, threatening, “What is coming is worse and more bitter”.

• (U) At the time of this report, Najim Laachraoui, the suspected bomb maker for the explosives used in the Brussels attacks, remains at large, and may be affecting other operations with direct support, or motivating other would be HVEs through his successful attack and evasion. A home related to him in Brussels was searched and more bomb making materials were found.

• (U) Germany recently declared Syrian and Iraqi passports issued in territories controlled by ISIL as invalid. German authorities stopped recognizing passports less than a month after French authorities found Syrian passports on the bodies of two men involved in the November 13 attacks in Paris. The German Interior Ministry warned that passports issued from Deir el-Zour, Raqqa and al-Hasaka in Syria, and Mosul and Anbar province in Iraq are invalid and their bearers’ identities are considered unconfirmed unless they can provide other documents (NY Times).

• (U) DHS recently added Libya, Somalia, and Yemen as countries of concern; limiting Visa Waiver Program travel for certain individuals who traveled to these countries to ensure the program’s requirements are commensurate with the threat from foreign terrorist fighters. Individuals can still apply for a visa using the regular immigration process at any US Embassy or consulate. (DHS)

• (U) State Department Travel Warning – The U.S. State Department has issued a travel warning to all Americans living in or traveling to Europe following Tuesday’s terrorist attacks in Brussels. The alert warns that that the Islamic State and other terrorist groups continue to plan attacks throughout Europe targeting sporting events, tourist sites, restaurants and transportation.

o Americans are advised to be vigilant in public places or when using public transit, to avoid crowded places and to exercise caution during religious holidays or while at large festivals or events. (The Dallas Morning News)

• (U//FOUO) Many transportation systems in major U.S. cities have increased their security postures. As a precautionary measure, TSA is deploying additional security to major city airports in the United States, and at various rail and transit stations around the country. TSA is also working closely with state and local law enforcement, airport and transit authorities, and the aviation industry in order to augment that security.

(U//FOUO) The ROIC reviewed suspicious activity reporting (SARs) related to transportation threats in New Jersey. These items are in addition or amplifying those reported in the previous Daily Threat Overviews.