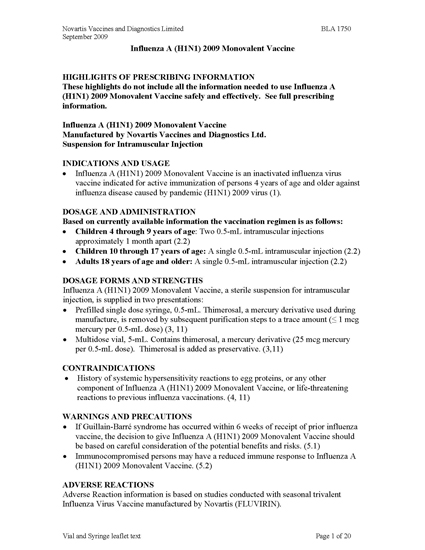 If Guillain-Barré syndrome has occurred within 6 weeks of receipt of prior influenza vaccine, the decision to give Influenza A (H1N1) 2009 Monovalent Vaccine should be based on careful consideration of the potential benefits and risks.

If Influenza A (H1N1) 2009 Monovalent Vaccine is administered to immunocompromised persons, including individuals receiving immunosuppressive therapy, the expected immune response may not be obtained.

Prior to administration of any dose of Influenza A (H1N1) 2009 Monovalent Vaccine, the healthcare provider should review the patient’s prior immunization history for possible adverse events, to determine the existence of any contraindication to immunization with Influenza A (H1N1) 2009 Monovalent Vaccine and to allow an assessment of benefits and risks. Appropriate medical treatment and supervision must be available to manage possible anaphylactic reactions following administration of the vaccine.

Vaccination with Influenza A (H1N1) 2009 Monovalent Vaccine may not protect all individuals.

Novartis’ Influenza A (H1N1) 2009 Monovalent Vaccine and seasonal trivalent Influenza Virus Vaccine (FLUVIRIN®) are manufactured by the same process. The data in this section were obtained from clinical studies and postmarketing experience with FLUVIRIN.

Serious allergic reactions, including anaphylactic shock, have been observed in individuals receiving FLUVIRIN during postmarketing surveillance.

Safety data were collected in a total of 2768 adult and geriatric subjects (18 years of age and older) who have received FLUVIRIN in 29 clinical studies since 1982.
In 9 clinical studies since 1997, among 1261 recipients of FLUVIRIN, 745 (59%) were women; 1211 (96%) were White, 23 (2%) Asian, 15 (1%) Black and 12 (1%) other; 370 (29%) of subjects were elderly (≥65 years of age). All studies have been conducted in the UK, apart from a study run in the US in 2005-2006 where FLUVIRIN was used as a comparator for an unlicensed vaccine.
After vaccination, the subjects were observed for 30 minutes for hypersensitivity or other immediate reactions. Subjects were instructed to complete a diary card for three days following immunization (i.e. Day 1 to 4) to collect local and systemic reactions (see Tables 1 and 2). All local and systemic adverse events were considered to be at least possibly related to the vaccine. Local and systemic reactions mostly began between day 1 and day 2. The overall adverse events reported in clinical trials since 1998 in at least 5% of the subjects are summarized in Table 3.

The following additional adverse reactions have been reported during post-approval use of FLUVIRIN. Because these reactions are reported voluntarily from a population of uncertain size, it is not always possible to reliably estimate their frequency or establish a causal relationship to vaccine exposure. Adverse events described here are included because: a) they represent reactions which are known to occur following immunizations generally or influenza immunizations specifically; b) they are potentially serious; or c) the frequency of reporting.

Anaphylaxis has been reported after administration of FLUVIRIN. Although FLUVIRIN and Influenza A (H1N1) 2009 Monovalent Vaccine contain only a limited quantity of egg protein, this protein can induce immediate hypersensitivity reactions among persons who have severe egg allergy. Allergic reactions include hives, angioedema, allergic asthma, and systemic anaphylaxis [see CONTRAINDICATIONS (4)].
The 1976 swine influenza vaccine was associated with an increased frequency of Guillain-Barré syndrome (GBS). Evidence for a causal relation of GBS with subsequent vaccines prepared from other influenza viruses is unclear. If influenza vaccine does pose a risk, it is probably slightly more than 1 additional case/1 million persons vaccinated.