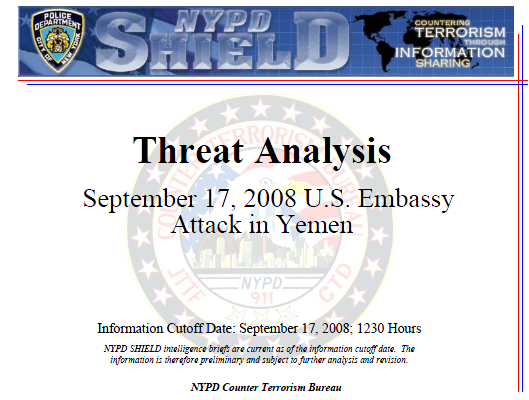 Summary
•The U.S. Embassy in Yemen was attacked on the morning of September 17th, 2008
•Six attackers in two vehicles, both of which were VBIEDs, attacked the front gate of the embassy
•The attack resulted in 16 deaths, a toll that includes all six attackers
•No Americans were killed, and there was no reported damage to the embassy buildings
•A group calling itself Islamic Jihad in Yemen claimed responsibility for the attack
•This is the largest attack in Yemen in the last few years, as al-Qaeda is reportedly undergoing a resurgence in that country

The Attack
•At 0915 (local time) two vehicles containing six attackers drove towards the front gates of the U.S. Embassy in Sanaa
•Both vehicles were painted to look like police vehicles
•The first vehicle, a VBIED carrying gunmen dressed in police uniforms, drove towards the embassy and engaged in a 10 -15 minute firefight with guards that included the use of RPGs
•One attacker in this vehicle was found wearing a suicide vest
•A second vehicle, also a VBIED, passed through the outermost gate of the embassy but detonated before it reached a second level of protective barriers 100 meters from the building
•Six Yemeni guards, four civilians including an Indian woman, and the six attackers were killed in the attack.

Conclusion
•Yemeni Islamic Jihad claimed credit for a VBIED attack last month, at that time they threatened a future attack in Sanaa
•If true, this is the first Islamic Jihad attack against U.S. targets since 1992
•The attack shows complexity in attacks for the group
•It mirrors the December 2004 al-Qaeda attack against the U.S. Consulate in Jeddah, Saudi Arabia that killed 9 people
•Two vehicles, one to cause an explosion, the other used to exploit the opening
•The attack against the U.S. Embassy will likely lead to more Yemeni government response against groups like Islamic Jihad and al-Qaeda, which may result in greater instability in Yemen

Implications for New York
•This attack had multiple elements and was as effective as a VBIED attack We anticipate future attacks will follow this methodology
•Low-order devices and small arms were used, prompting a focus on stand-off distances and explosive trace detection
•Cloned vehicles, i.e. vehicles painted in a certain way to gain closer access to the target, were also used
•This raises force protection issues as cloned vehicles are more important in overseas attacks; for businesses, black cars can gain access to target areas just as any vehicle driving in close proximity to a police precinct
•A number of Westerners have traveled to Yemen to study at Islamic centers including the al-Qaeda affiliated DimajInstitute, most recently six from Philadelphia. A newly resurgent al-Qaeda or like group could possibly attract Westerners such as it did in Somalia