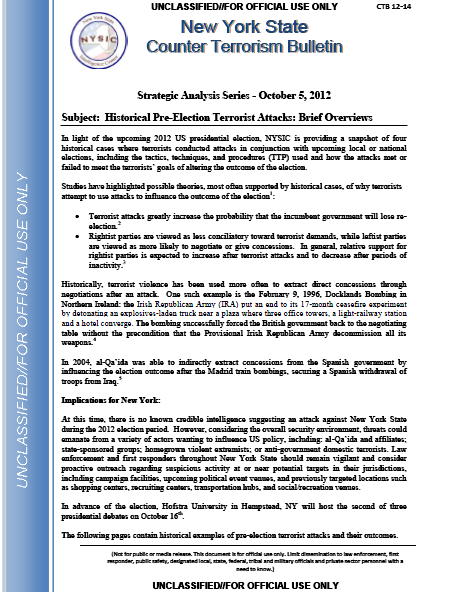 Studies have highlighted possible theories, most often supported by historical cases, of why terrorists attempt to use attacks to influence the outcome of the election:

Historically, terrorist violence has been used more often to extract direct concessions through negotiations after an attack. One such example is the February 9, 1996, Docklands Bombing in Northern Ireland: the Irish Republican Army (IRA) put an end to its 17-month ceasefire experiment by detonating an explosives-laden truck near a plaza where three office towers, a light-railway station and a hotel converge. The bombing successfully forced the British government back to the negotiating table without the precondition that the Provisional Irish Republican Army decommission all its weapons.

In 2004, al-Qa’ida was able to indirectly extract concessions from the Spanish government by influencing the election outcome after the Madrid train bombings, securing a Spanish withdrawal of troops from Iraq.

At this time, there is no known credible intelligence suggesting an attack against New York State during the 2012 election period. However, considering the overall security environment, threats could emanate from a variety of actors wanting to influence US policy, including: al-Qa’ida and affiliates; state-sponsored groups; homegrown violent extremists; or anti-government domestic terrorists. Law enforcement and first responders throughout New York State should remain vigilant and consider proactive outreach regarding suspicious activity at or near potential targets in their jurisdictions, including campaign facilities, upcoming political event venues, and previously targeted locations such as shopping centers, recruiting centers, transportation hubs, and social/recreation venues.