Office of the Director of National Intelligence Summary of U.S. Counterterrorism Strikes Outside Areas of Active Hostilities

The following summary was released by the Office of the Director of National Intelligence July 1, 2016. 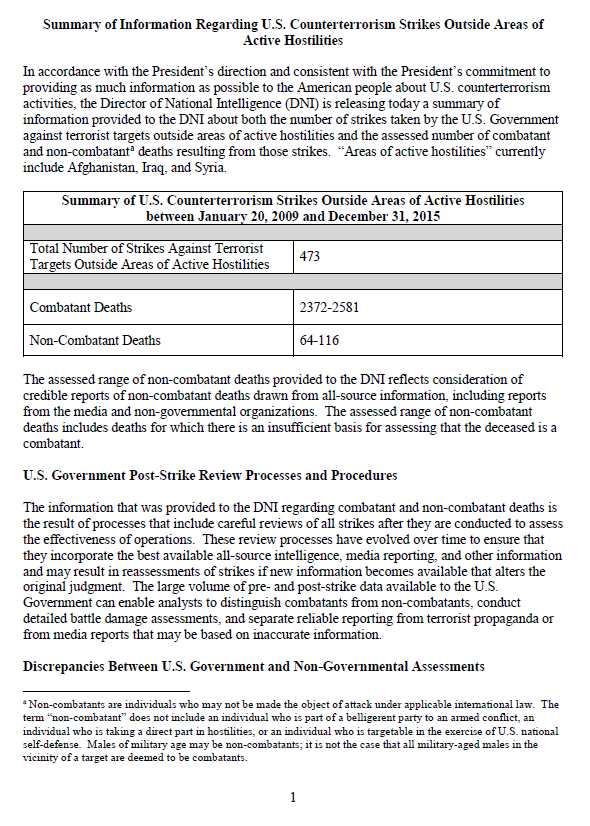 Summary of Information Regarding U.S. Counterterrorism Strikes Outside Areas of Active Hostilities

In accordance with the President’s direction and consistent with the President’s commitment to providing as much information as possible to the American people about U.S. counterterrorism activities, the Director of National Intelligence (DNI) is releasing today a summary of information provided to the DNI about both the number of strikes taken by the U.S. Government against terrorist targets outside areas of active hostilities and the assessed number of combatant and non-combatant deaths resulting from those strikes. “Areas of active hostilities” currently include Afghanistan, Iraq, and Syria.

The information that was provided to the DNI regarding combatant and non-combatant deaths is the result of processes that include careful reviews of all strikes after they are conducted to assess the effectiveness of operations. These review processes have evolved over time to ensure that they incorporate the best available all-source intelligence, media reporting, and other information and may result in reassessments of strikes if new information becomes available that alters the original judgment. The large volume of pre- and post-strike data available to the U.S. Government can enable analysts to distinguish combatants from non-combatants, conduct detailed battle damage assessments, and separate reliable reporting from terrorist propaganda or from media reports that may be based on inaccurate information.