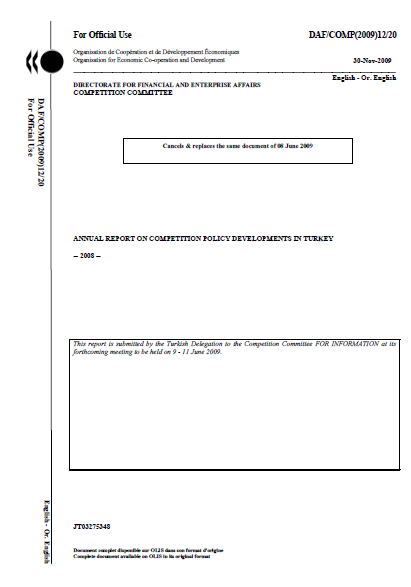 2. In terms of enforcement of competition rules, the number of decisions taken increased in 2008 compared to the previous year. While the number of merger and exemption cases increased significantly, the number of cases in the area of competition infringements (cartels, vertical restraints and abusive practices) decreased. The increasing number of exemption applications is quite striking in 2008. The main explanation for this increase comes from the introduction of 40% market share threshold in the Block Exemption Communiqué on Vertical Agreements. The agreements previously exempted lost their exempted status after the introduction of the threshold. Thus, undertakings whose agreements no longer benefited from block exemption applied for individual exemption. On the other hand, the decreasing number of competition infringements is also clearly seen in 2008. An important explanation for this decrease can be associated with the files opened in 2008 but not concluded yet.

3. The TCA attached special importance on competition advocacy in 2008. In this regard, it sent
formal opinions to the requesting governmental agencies. The opinions prepared with respect to the
markets such as banking, pharmaceutical, and energy including petroleum distribution are quite striking
and have had significant influence on improving competitive conditions in the relevant markets. The TCA
also contributed to capacity building efforts for regulatory impact assessment (by the Prime Ministry),
which would institutionalize advocacy role of the TCA. In its effort, the TCA has translated the OECD
competition assessment toolkit and considers introducing a guideline on the basis of this toolkit.

4. The TCA introduced a number of important secondary legislation in 2008. In this regard, the
Guidelines on Definition of Relevant Market, Guidelines on Certain Subcontracting Agreements between
Non-competitors, Block Exemption Communiqué in relation to the Insurance Sector, Block Exemption
Communiqué on Technology Transfer Agreements were adopted and entered into force. Importantly, the
Prime Ministry sent the Bill to amend the the Act No 4054 on the Protection of Competition (the
Competition Act) extensively to the Parliament. While preparing the Bill, the TCA took into consideration
its almost 11-year experience, relevant EU legislation, work-products of international organizations such as
OECD and ICN and the recommendations of OECD Peer Review Report of 2005.

5. As part of its policy for relations with other governmental agencies, the TCA approached the
Public Procurement Agency to build a cooperation framework between the two agencies. It is expected that
such a cooperation framework will contribute to dealing with bid rigging effectively and making public
tenders more competitive. Additionally, the TCA signed a cooperation protocol with TIKA (Turkish
International Cooperation and Development Agency) to deliver technical assistance to the countries within
the framework of Turkey’s aid policy.

6. The TCA had a very active period of time in international relations in 2008. In this regard, the
TCA actively contributed to the events/projects at multilateral platforms such as OECD, ICN and
UNCTAD as well as bilateral platforms.

1. Changes to Competition Laws and Policies

1.1. Amendments in the Competition Act

8. According to the amendments of 2008, the previous fixed amounts of procedural fines in Article
16 of the Competition Act were replaced by fines that would be calculated by taking into account the
annual gross revenue. As a result of the amendment, undertakings, association of undertakings and
members of such associations shall be imposed 0.1 % of their annual gross revenue where

• incorrect or misleading information or document is provided in exemption and negative clearance
applications as well as in applications for permission to mergers and acquisitions;

• incomplete, incorrect or misleading information or document is provided, or information or
document is not provided within the time specified or at all in respect of application of Articles
14 and 15 of the Competition Act regarding the powers granted to the TCA with respect to
request for information and on-the-spot inspection,

• on-the-spot inspection is prevented or made difficult.

13. The amendment also clarifies that regarding the substantive fine to be imposed up to 10% of the
annual gross revenue, the annual gross revenue shall be the one which generated by the end of the fiscal
year preceding the final decision, or where it can not be calculated, which generated by the end of the fiscal
year closest to the date of the final decision. Moreover, according to the amendment the executives or
employees of the undertaking or the association of undertakings which are detected to have had a
determining impact on the violation will be imposed fines up to 5% of the substantive fine imposed on the
undertaking or association of undertakings.