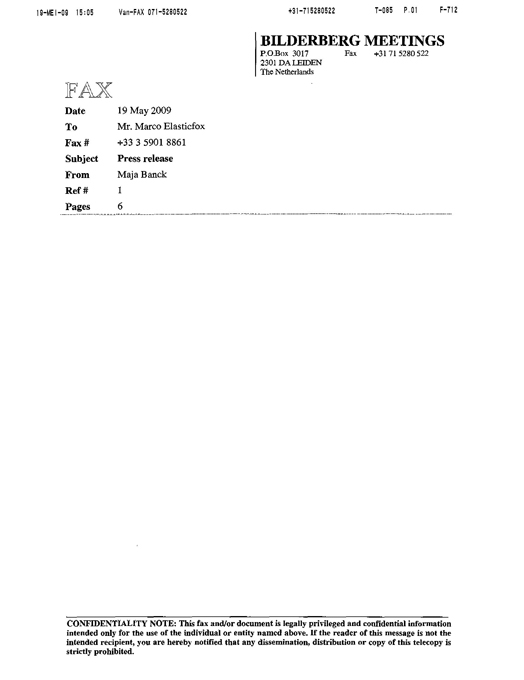 The 57th Bilderberg Meeting will be held in Vouliagmeni, Greece 14 – 17 May 2009. The Conference will deal mainly with the financial crisis, governments and markets, role of institutions, market economies and democracies, Iraq, Pakistan and Afghanistan, US and the World, cyberterrorism, new imperialisms, protectionism, post-Kyoto challenges. Approximately 130 participants will attend of whom about two-thirds come from Europe and the balance from North America. About one-third is from government and politics, and twothirds are from finance, industry, labor, education, and communications. The meeting is private in order to encourage frank and open discussion.

Bilderberg takes its name from the hotel in Holland, where the first meeting took place in May 1954. That pioneering meeting grew out of the concern expressed by leading citizens on both sides of the Atlantic that Western Europe and North America were not working together as closely as they should on common problems of critical importance. It was felt that regular, off-the-record discussions would help create a better understanding of the complex forces and major trends affecting Western nations in the difficult post-war period. The Cold War has now ended. But in practically all respects there are more, not fewer, common problems – from trade to jobs, from monetary policy to investment, from ecological challenges to the task of promoting international security. It is hard to think of any major issue in either Europe or North America whose unilateral solution would not have repercussions for the other. Thus the concept of a European-American forum has not been overtaken by time. The dialogue between these two regions is still – even increasingly – critical.

What is unique about Bilderberg as a forum is the broad cross-section of leading citizens that are assembled for nearly three days of informal and off-the-record discussion about topics of current concern cspecially in the fields of foreign affairs and the international economy; the strong feeling among participants that in view of the differing attitudes and experiences of the Western nations, there remains a clear need to further develop an understanding in which these concerns can be accommodated; the privacy of the meetings, which has no purpose other than to allow participants to speak their minds openly and freely.  Tn short, Bildcrberg is a small, flexible, informal and off-the-record international forum in which different viewpoints can bc expressed and mutual understanding enhanced, Bilderberg’s only activity is its annual Conference. At the meetings, no conclusions are reached, no recommendations are made and no policy statements issued. Since 1954, fifty-six conferences have been held. The names of the participants are made available to the press. Participants are chosen for their experience, their knowledge, and their standing; all
participants attend Bilderberg in a private and not an official capacity. There will be no press conference. A list ofparticipants is appended. 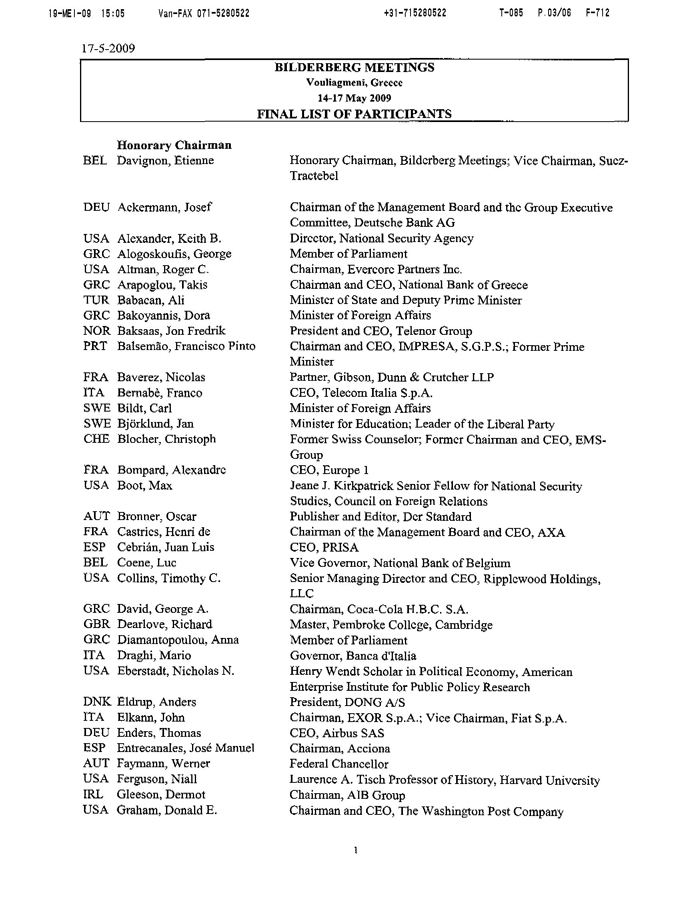 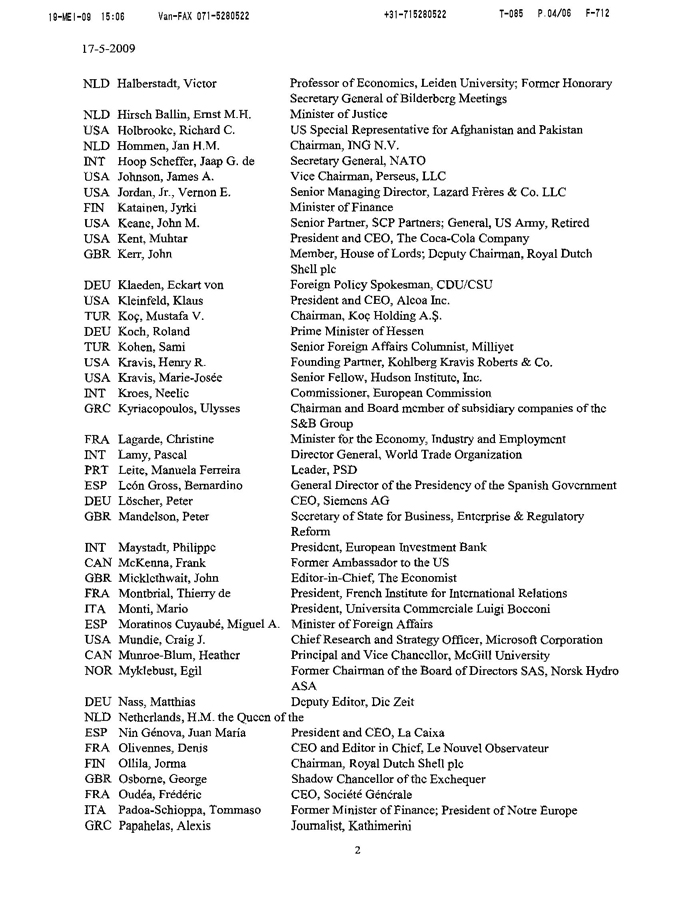 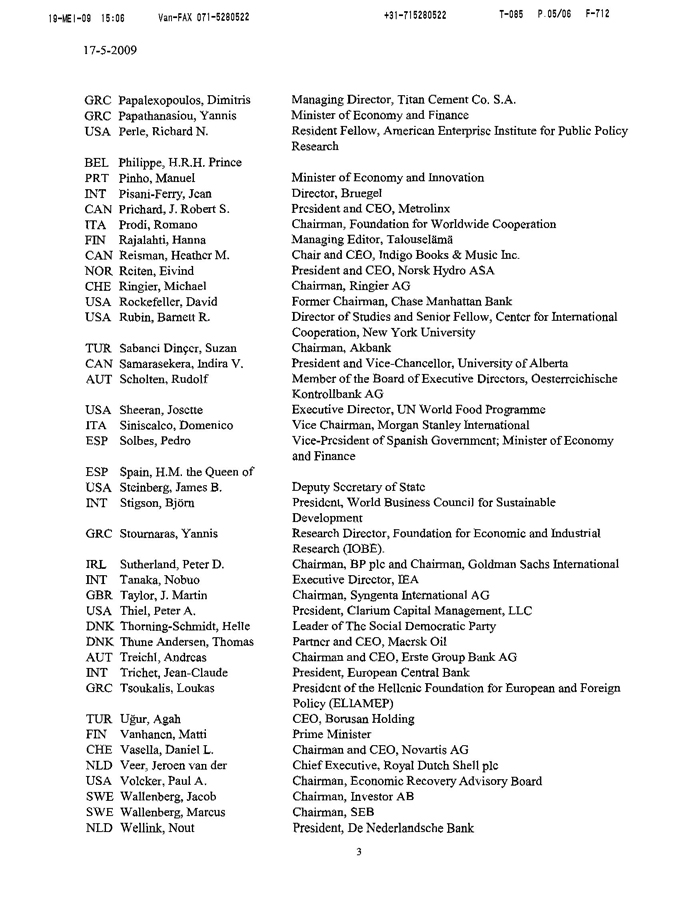 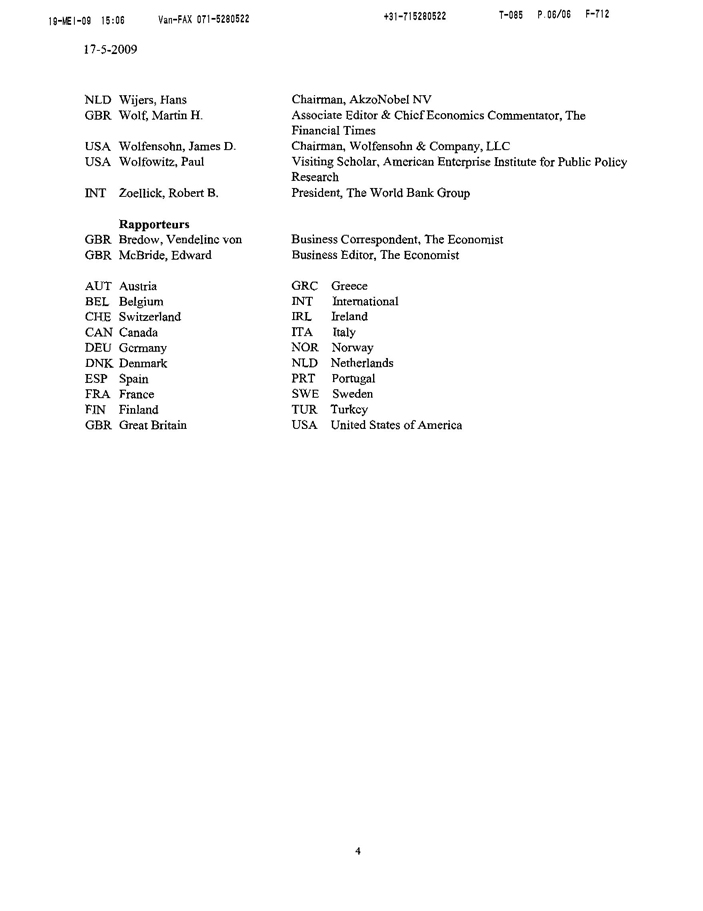