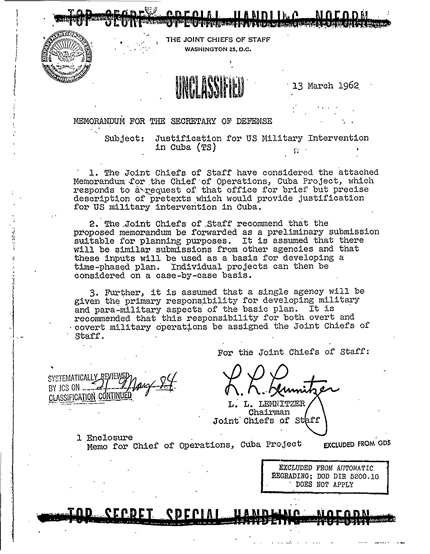 1. Since it would seem desirable to use legitimate provocation as the basis for US military intervention in Cuba a cover and deception plan, to include requisite preliminary actions such as has been developed in response to Task 33 c, could be executed as an initial effort to provoke Cuban reactions. Harassment plus deceptive actions to convince the Cubans of imminent invasion would be emphasized. Our military posture throughout execution of the plan will allow a rapid change from exercise to intervention if Cuban response justifies.

2. A series of well coordinated incidents will be planned to take place in and around Guantanamo to give genuine appearance of being done by hostile Cuban forces.

a. Incidents to establish a credible attack (not in chronological order):

(1) start rumors (many). Use clandestine radio.

(2) Land friendly Cubans in uniform “over-the-fence” to stage attack on base.

(3) Capture Cuban (friendly) saboteurs inside the base.

(4) Start riots near the base main gate (friendly Cubans).

(5) Blow up ammunition inside the base; start fires.

(6) Burn aircraft on air base (sabotage).

(7) Lob mortar shells from outside of base into base. Some damage to installations.

(8) capture assault teams approaching from the sea or vicinity of Guantanamo City.

(9) Capture militia group which storms the base.

(11) Sink ship near harbor entrance. Conduct funerals for mock-victims (may be lieu of (10)).

b. United States would respond by executing offensive operations to secure water and power supplies, destroying artillery and mortar emplacements which threaten the base.

3. A “Remember the Maine” incident could be arranged in several forms:

a. We could blow up a US ship in Guantanamo Bay and blame Cuba.

b. We could blow up a drone (unmanned) vessel anywhere in the Cuban waters. We could arrange to cause such incident in the vicinity of Havana or Santiago as a spectacular result of Cuban attack from the air or sea, or both. The presence of Cuban planes or ships merely investigating the intent of the vessel could be fairly compelling evidence that the ship was taken under attack. The nearness to Havana or Santiago would add credibility especially to those people that might have heard the blast or have seen the fire. The US could follow up with an air/sea rescue operation covered by US fighters to “evacuate” remaining members of the non-existent crew. Casualty lists in US newspapers would cause a helpful wave of national indignation.

4. We could develop a Communist Cuban terror campaign in the Miami area, in other Florida cities and even in Washington. The terror campaign could be pointed at refugees seeking haven in the United States. We could sink a boatload of Cubans enroute to Florida (real or simulated). We could foster attempts on lives of Cuban refugees in the United States even to the extent of wounding in instances to be widely publicized. Exploding a few plastic bombs in carefully chosen spots, the arrest of Cuban agents and the release of prepared documents substantiating Cuban involvement, also would be helpful in projecting the idea of an irresponsible government.

5. A “Cuban-based, Castro-supported” filibuster could be simulated against a neighboring Caribbean nation (in the vein of the 14th of June invasion of the Dominican Republic). We know that Castro is backing subversive efforts clandestinely against Haiti, Dominican Republic, Guatemala, and Nicaragua at present and possible others. These efforts can be magnified and additional ones contrived for exposure. For example, advantage can be taken of the sensitivity of the Dominican Air Force to intrusions within their national air space. “Cuban” B-26 or C-46 type aircraft could make cane-burning raids at night. Soviet Bloc incendiaries could be found. This could be coupled with “Cuban” messages to the Communist underground in the Dominican Republic and “Cuban” shipments of arm which would be found, or intercepted, on the beach.

6. Use of MIG type aircraft by US pilots could provide additional provocation. Harassment of civil air, attacks on surface shipping and destruction of US military drone aircraft by MIG type planes would be useful as complementary actions. An F-86 properly painted would convince air passengers that they saw a Cuban MIG, especially if the pilot of the transport were to announce such fact. The primary drawback to this suggestion appears to be the security risk inherent in obtaining or modifying an aircraft. However, reasonable copies of the MIG could be produced from US resources in about three months.

a. An aircraft at Eglin AFB would be painted and numbered as an exact duplicate for a civil registered aircraft belonging to a CIA proprietary organization in the Miami area. At a designated time the duplicate would be substituted for the actual civil aircraft and would be loaded with the selected passengers, all boarded under carefully prepared aliases. The actual registered aircraft would be converted to a drone.

b. Take off times of the drone aircraft and the actual aircraft will be scheduled to allow a rendezvous south of Florida. From the rendezvous point the passenger-carrying aircraft will descend to minimum altitude and go directly into an auxiliary field at Eglin AFB where arrangements will have been made to evacuate the passengers and return the aircraft to its original status. The drone aircraft meanwhile will continue to fly the filed flight plan. When over Cuba the drone will being transmitting on the international distress frequency a “MAY DAY” message stating he is under attack by Cuban MIG aircraft. The transmission will be interrupted by destruction of the aircraft which will be triggered by radio signal. This will allow ICAO radio stations in the Western Hemisphere to tell the US what has happened to the aircraft instead of the US trying to “sell” the incident.

9. It Is possible to create an incident which will make it appear that Communist Cuban MIGs have destroyed a USAF aircraft over international waters in an unprovoked attack.

a. Approximately 4 or 5 F-101 aircraft will be dispatched in trail from Homestead AFB, Florida, to the vicinity of Cuba. Their mission will be to reverse course and simulate fakir aircraft for an air defense exercise in southern Florida. These aircraft would conduct variations of these flights at frequent Intervals. Crews would be briefed to remain at least 12 miles off the Cuban coast; however, they would be required to carry live ammunition in the event that hostile actions were taken by the Cuban MIGs.

b. On one such flight, a pre-briefed pilot would fly tail-end Charley at considerable interval between aircraft. While near the Cuban Island this pilot would broadcast that he had been jumped by MIGs and was going down. No other calls would be made. The pilot would then fly directly west at extremely low altitude and land at a secure base, an Eglin auxiliary. The aircraft would be met by the proper people, quickly stored and given a new tail number. The pilot who had performed the mission under an alias, would resume his proper identity and return to his normal place of business. The pilot and aircraft would then have disappeared.

c. At precisely the same time that the aircraft was presumably shot down a submarine or small surface craft would disburse F-101 parts, parachute, etc., at approximately 15 to 20 miles off the Cuban coast and depart. The pilots returning to Homestead would have a true story as far as they knew. Search ships and aircraft could be dispatched and parts of aircraft found.