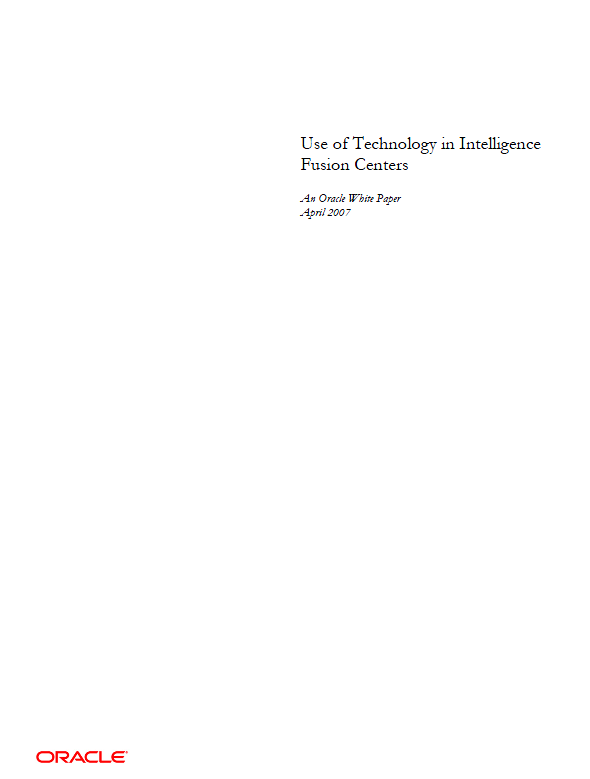 Use of Technology in Intelligence Fusion Centers

The Use of Technology in Fusion Centers

State and local law enforcement agencies are engaged in the day-to-day business of fighting crime and terrorism. A federal government, post event analysis concluded that sufficient information existed such that law enforcement officials could have intercepted the terrorists that flew aircraft into the World Trade Center. This “connecting-the-dots” philosophy relies heavily on real-time information integrated into a single comprehensive 360 view of the environment. The development and funding of intelligence fusion centers is a direct result of a need for better, more integrated information about suspects, locations, and conveyances that may be used in the planning or commission of a crime, including a terrorist act. The concept of the fusion center as an all source production of criminal and intelligence information is a good one. The weakness in the approach is the over reliance upon individuals staffing the fusion centers. In any business, labor costs are one of the biggest burdens to the profitability of the business. While current technology cannot replace the human brains ability for abstract thought and analysis, technology can provide methods and means for the collection, integration, analysis, and dissemination of all source intelligence to enhance fusion center operational efficiencies.

Business Intelligence- Business Intelligence is also a technology layer within the fusion center architecture. This layer contains powerful services and applications that provide summary reports, ad hoc queries, geographic and geospatial queries, visualizations, OLAP, and data mining. This is the layer that provides users with intuitive tools to search, manage, and display information of interest. An example of business intelligence in a crime fighting context may be that a series of robberies occurs. By leveraging business intelligence tools, the analyst or investigator can quickly determine the locations of specific types of crimes, time of day/day of week parameters and identify common methods of operation and common suspect demographics to determine of there are any commonalities. This information can then be readily used to develop suppression or enforcement strategies to apprehend the suspect or suspects.

Most law enforcement agencies have had a similar primary mission; that is to serve and protect the citizens and property within their respective jurisdictions. As a result of the terrorist attacks of September 11, 2001 the law enforcement community gained the additional mission of detection, deterrence, and prevention of future terrorist attacks. As a result, the law enforcement community must not only deal with the day-to-day issues of crime and the fear of crime, but also the once in a career terrorist attack. Fusion centers were developed as a response to the terrorist events that occurred on September 11, 2001. The concept of regional information sharing to fight crime was expanded to include the evolving law enforcement role of detection, deterrence, and protection against terrorist acts. There are similarities and disparities within the various fusion centers. Some fusion centers have only analytical roles while others also have the personnel and capabilities to act on intelligence and conduct investigations. Some centers have a regional outlook, sharing information among states; others have a vertical structure, connecting states to local and federal agencies, but not to other states. While some fusion centers are contained within the federally led joint terrorism task forces, others are independent. Regardless of these similarities and disparities, each fusion center has a shortage of resources, budget, and personnel to address all contingencies. By leveraging technology, fusion centers maybe able to mitigate the impact of some of these challenges.

The United States Justice Department has provided fusion center guidance and has encouraged the use of industry standards such as Global Justice XML Data Model and the National Information Exchange Model. The government has also supported Services Oriented Architecture for use within fusion centers. There are, however, a number of industries standard technologies not mentioned by the government, even though they are in use by law enforcement agencies and commercial businesses alike. The use of business intelligence, document and identity management, enterprise search, and integration technologies can all enhance the capabilities and effectiveness of fusion center analysts, administrators, and investigators.