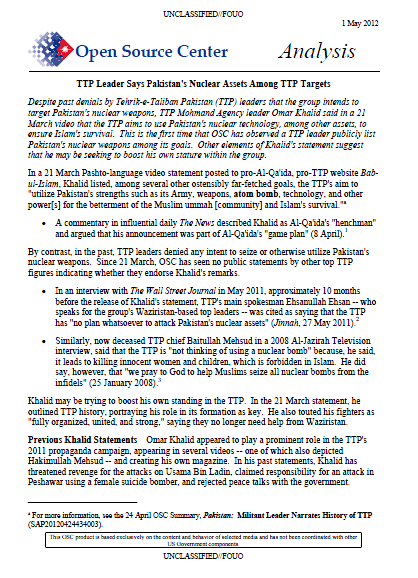 In a 21 March Pashto-language video statement posted to pro-Al-Qa’ida, pro-TTP website Babul-Islam, Khalid listed, among several other ostensibly far-fetched goals, the TTP’s aim to “utilize Pakistan’s strengths such as its Army, weapons, atom bomb, technology, and other power[s] for the betterment of the Muslim ummah [community] and Islam’s survival.”

Previous Khalid Statements Omar Khalid appeared to play a prominent role in the TTP’s 2011 propaganda campaign, appearing in several videos — one of which also depicted Hakimullah Mehsud — and creating his own magazine. In his past statements, Khalid has threatened revenge for the attacks on Usama Bin Ladin, claimed responsibility for an attack in Peshawar using a female suicide bomber, and rejected peace talks with the government.