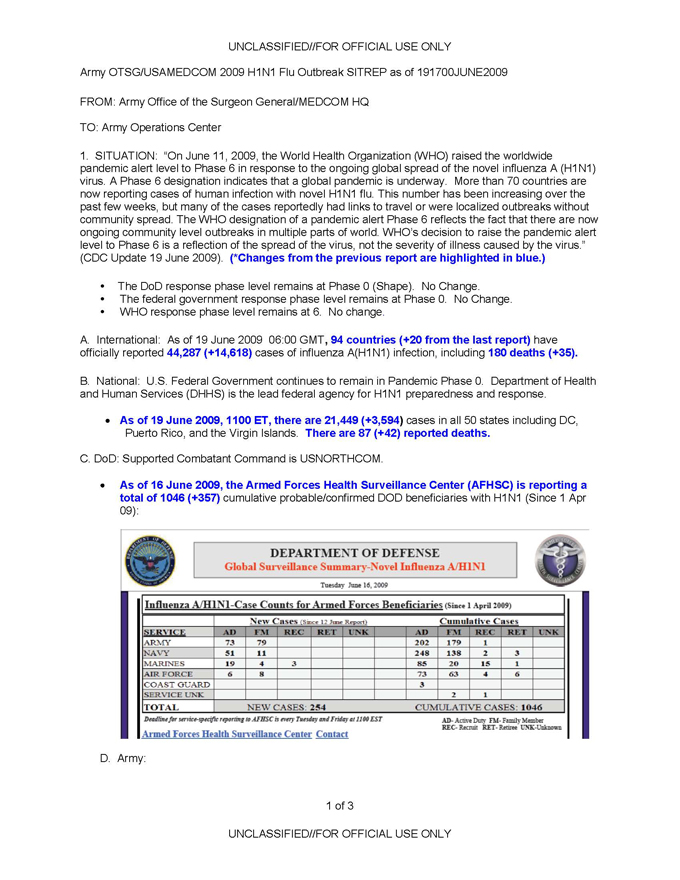 1. SITUATION: “On June 11, 2009, the World Health Organization (WHO) raised the worldwide pandemic alert level to Phase 6 in response to the ongoing global spread of the novel influenza A (H1N1) virus. A Phase 6 designation indicates that a global pandemic is underway. More than 70 countries are now reporting cases of human infection with novel H1N1 flu. This number has been increasing over the past few weeks, but many of the cases reportedly had links to travel or were localized outbreaks without community spread. The WHO designation of a pandemic alert Phase 6 reflects the fact that there are now ongoing community level outbreaks in multiple parts of world. WHO’s decision to raise the pandemic alert level to Phase 6 is a reflection of the spread of the virus, not the severity of illness caused by the virus.” (CDC Update 19 June 2009).

*Note: The total Army numbers listed above will not match the totals listed in the DoD Global Surveillance Summary as reported by the Armed Forces Health Surveillance Center (AFHSC) in paragraph 1.C. AFHSC reports weekly every Wednesday whereas OTSG/MEDCOM reports weekly as of Friday.

3. EXECUTION:
a. LAST 72 HRS: Monitor the situation and coordinated with ARCENT.
b. CURRENT FOCUS AND ACTIVITIES: Coordinating with DA G3 to ensure effective screening of all Soldiers prior to arrival in Kuwait.
c. NEXT 24 HOURS: Continued monitoring of new and confirmed cases.

5. COMMANDER’S NARRATIVE ASSESSMENT: OTSG/MEDCOM continues to assess the situation and prepare for the future. Despite the World Health Organization raising its alert level to 6, the DoD remains at level 0. The WHO alert level is based on the geographic distribution of the outbreak (it is now sustained at locations world wide) while the DoD alert levels are related to the severity or impact of the outbreak. Because DoD operations are relatively unaffected the alert level has not increased. We are focusing current staff and command effort in support of CENTCOM pre deployment screening requirements.