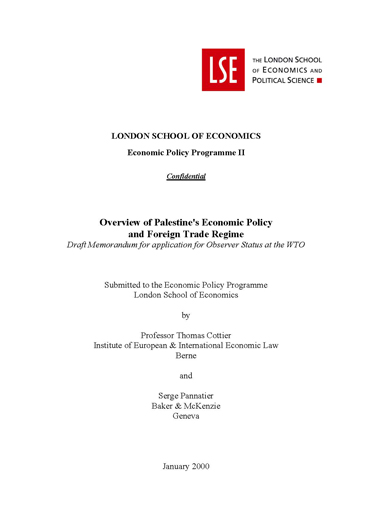 A. Geography and population

Palestine lies on the western edge of the Asian continent and on the eastern extremity of the Mediterranean Sea. Its territory comprises two parts – the West Bank, a landlocked area bordered by Israel and Jordan, and the Gaza Strip, bordered by Israel, Egypt and the Mediterranean Sea. It covers an approximate area of 6,165 km2 (5,800 km2 in the West Bank and 365 km2 in the Gaza Strip).

The population of Palestine was put at 2,895,683 in the 1997 census, with 1,873,476 living in the West Bank and 1,022,207 in the Gaza Strip. The population has been growing at an annual rate of 5% in recent years. This extremely rapid growth rate reflects both high fertility rates and the return of Palestinians to their homeland. The literacy rate of 86% ranks amongst the highest in the Arab world. Arabic is the official language, although English and Hebrew are widely used.

More Palestinians live outside the territory of Palestine than within it. Estimates in 1997 put the numbers at 5,120,000 of which nearly half were refugees; at end 1998 a total of 2,225,094 were registered with the United Nations Refugee and Works Agency (UNRWA) in Jordan, Lebanon and Syria. There is also a still large refugee community within Palestine, numbering 1,348,288 at the same date.

Although it has undergone a significant process of modernisation over the last five years, the Palestinian economy is characterised by profound structural imbalances and high external dependence. This owes much to the lengthy period of Israeli occupation from 1967, which blocked export markets (other than Israel) and deterred investment in production capacity. With the scope for domestic employment generation thus severely curtailed, a large proportion of the Palestinian labour force had to find work in Israel. The ratio has varied with the security situation, with border closures by Israel repeatedly interrupting the flow of workers. It has fallen since the Oslo peace accords in 1993, but Palestinian employment in Israel and the Jewish settlements in West Bank and Gaza represented a fifth of the total work force in 1998. The economy is thus highly dependent on the earnings from this group, and also from inflows of funds from the Palestinian diaspora. Since much of the latter is not recorded, its exact size can only be estimated. The IMF has put the value of transfers at  upwards of $1bn a year in mid-1990s – or around double the level of Palestine’s export earnings. The labour surplus in Palestine and the capital resources of the expatriate community represent two significant reservoirs to feed economic growth. The still limited capacity of the Palestinian economy has meant that it is highly dependent on imports and has a chronic trade deficit. In 1995-98 imports of goods and services were equivalent to, on average, 69% of GDP. Exports, by contrast, were equivalent to only around 18%. Israel remains overwhelmingly the dominant trade partner, accounting for 90% of Palestinian imports and 88% of exports in 1996 – both marginally up on the ratios at the beginning of the decade.

Its vulnerability to external factors has meant that the economy’s performance has fluctuated widely. Expanding employment opportunities for Palestinians in Israel and the Gulf brought a period of strong GDP growth in the 1970s, with an average estimated at 8-9% a year. The deteriorating external environment – with the onset of the intifada in 1989 and in the aftermath of the Gulf War, when Palestinians were expelled from Kuwait and Gulf countries – caused a decline in GDP in 1987-89 and again in 1991. The wide variation in growth has continued since, with a surge to 11.8% growth in GDP in 1994 in the wake of the Oslo accords followed by two years of decline, and a recovery in 1997-99, when the annual rise was running at around the 2-4% rate. These results, combined with the surge in population numbers, mean that GDP per head has risen in only one year – 1994 – while GDP per head in 1999 will have been about one eighth below its level in 1993.

The framework within which the Palestinian foreign trade regime operates is set out in the Protocol on Economic Relations between the Government of Israel and the PLO representing the Palestinian People, signed on April 29, 1994 (the Paris Protocol). This protocol was appended to the Israeli-Palestinian Interim Agreement on the West Bank and Gaza Strip of September 1995 (the Washington agreement). This instrument governs the economic relations between the two parties during the interim period, i.e. until a permanent final status agreement enters into force. Negotiations for the final status are in process. The present regime inherently links Palestine to a large extent to the foreign trade regime of Israel and thus to its rights and obligations under the WTO. Imports into, and exports from, Palestine to third countries are largely bound by these rules, except where the Paris Protocol exceptionally offers room for autonomous foreign trade policies of the PA.

A. The foreign trade clauses of the Paris Protocol

The Paris Protocol lays the foundations of a de facto customs union between Israel and the West Bank/Gaza Strip. It provides for the free movement for both agricultural and industrial products, subject to each side’s legislation. No certificates of origin are required. In respect of imports from third parties, the two parties apply the import policy of Israel.

However, the Paris Protocol and the Washington agreement introduce exceptions which deviate from a strict customs union, in relation to mutual trade and imports from third parties.

Thus, the free movement of goods between the two sides is:

– limited by quotas for the mutual exchange of six agricultural products (to be removed by 1998);

– dependent on each side’s legislation, mainly in the fields of phytosanitary, veterinary and quality controls, labelling and environmental protection;

– subject to special rules for petroleum and motor vehicles as a consequence of the rights the PA can exercise in respect of their import;

– constrained by the special modalities agreed upon in respect of the direct import into Palestine of products enumerated in Lists A1, A2 and B, annexed to the protocol. (List A1 relates to goods produced in Arab countries, List A2 to food items and cotton from Arab, Islamic or other countries, and List B to goods for the Palestinian economic development programme.)

In addition there are exceptions to the implementation of Israel’s import policy:

– the PLO/PA may decide on any upward change in import rates on all products not specified in Lists A1, A2 and B and with respect to quantities exceeding these agreed upon with regard to products in Lists A1 and A2.

– it may autonomously set its own tariffs, if necessary at a lower level, on goods in Lists A1, A2 and B, in agreed quantities. To date the PA has not introduced any changes to the prevailing customs duties.

Palestine has adopted a policy to bring about trading relations which are fully compatible with principles, rules and obligations of the WTO. Relations with its neighbouring countries and
WTO members around the World should be firmly based on the law of the WTO. Under the 1994 Paris Protocol, Palestine is largely bound by these rules even without being a member in its own right. WTO members, exporting to, and importing from, Palestine are equally and indirectly bound in their relations by this body of law. However, Palestine does not have the possibility, at this stage, either to follow discussions and negotiations within the World Trade Organisation, or to express its views and specific interests in this multilateral forum. In view of its aspiration to pursue WTO-compatible policies within the region and given the current partial autonomy it enjoys combined with the existing legal and de facto implications of WTO law, the Palestinian Authority respectfully submits this memorandum with a view to obtain the status as an observer and, subsequently, of a Member, for consideration to the Member States of the World Trade Organisation.