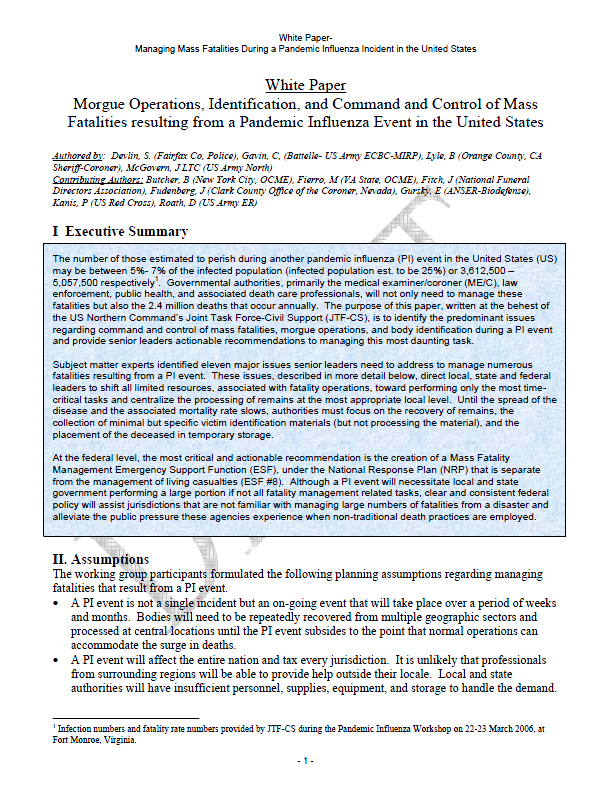 The number of those estimated to perish during another pandemic influenza (PI) event in the United States (US) may be between 5%- 7% of the infected population (infected population est. to be 25%) or 3,612,500 – 5,057,500 respectively1. Governmental authorities, primarily the medical examiner/coroner (ME/C), law
enforcement, public health, and associated death care professionals, will not only need to manage these fatalities but also the 2.4 million deaths that occur annually. The purpose of this paper, written at the behest of the US Northern Command’s Joint Task Force-Civil Support (JTF-CS), is to identify the predominant issues regarding command and control of mass fatalities, morgue operations, and body identification during a PI event and provide senior leaders actionable recommendations to managing this most daunting task.

Subject matter experts identified eleven major issues senior leaders need to address to manage numerous fatalities resulting from a PI event. These issues, described in more detail below, direct local, state and federal leaders to shift all limited resources, associated with fatality operations, toward performing only the most timecritical tasks and centralize the processing of remains at the most appropriate local level. Until the spread of the disease and the associated mortality rate slows, authorities must focus on the recovery of remains, the collection of minimal but specific victim identification materials (but not processing the material), and the placement of the deceased in temporary storage.

At the federal level, the most critical and actionable recommendation is the creation of a Mass Fatality Management Emergency Support Function (ESF), under the National Response Plan (NRP) that is separate from the management of living casualties (ESF #8). Although a PI event will necessitate local and state government performing a large portion if not all fatality management related tasks, clear and consistent federal policy will assist jurisdictions that are not familiar with managing large numbers of fatalities from a disaster and alleviate the public pressure these agencies experience when non-traditional death practices are employed.

The working group participants formulated the following planning assumptions regarding managing
fatalities that result from a PI event.

• A PI event is not a single incident but an on-going event that will take place over a period of weeks
and months. Bodies will need to be repeatedly recovered from multiple geographic sectors and
processed at central locations until the PI event subsides to the point that normal operations can
accommodate the surge in deaths.

• A PI event will affect the entire nation and tax every jurisdiction. It is unlikely that professionals
from surrounding regions will be able to provide help outside their locale. Local and state
authorities will have insufficient personnel, supplies, equipment, and storage to handle the demand.

Agencies will need to obtain assistance from existing public and private agencies in their area
instead of looking to acquire these resources elsewhere.

• Every jurisdiction will require similar types of critical resources, to include personnel, equipment
and supplies, to manage the surge in the number of decedents. Our nation’s just-in-time inventory
method however, will not be able to respond quickly enough to manufacture these additional
supplies.

• Some states may attempt to contain disease spread by closing their borders. Such actions, though
of limited proven disease containment value, may instead slow and frustrate the delivery and
receipt of needed supplies and equipment.

• The public utility infrastructure may be temporarily shut down or hampered, causing shortages of
water, food, medicine, and gasoline. Without such items all government personnel will have a
difficult time performing their tasks. Agencies may need to develop creative methods to decrease
their need for gasoline, which is believed to be the most likely item in short supply.

• For those jurisdictions whereby influenza is the cause of death and therefore is not considered a
ME/C case, the public health department will authorize the ME/C to take jurisdiction of the bodies.

• The death care industry, comprised of public and private agencies, will not be able to process
remains in the traditional manner due to the increased number of cases.

• PI related deaths will primarily fall into two major categories, attended and unattended. The
process to identify remains from attended deaths will be relatively straightforward, however,
unattended deaths, which require verification of identity, issuing a death certificate, and notifying
the next of kin, will be labor intensive.

• There will be delays in the issuances of death certificates for both attended and unattended deaths.
This delay will place substantial pressure on the ME/C to issue death certificates so that the next of
kin can manage the decedent’s estate. 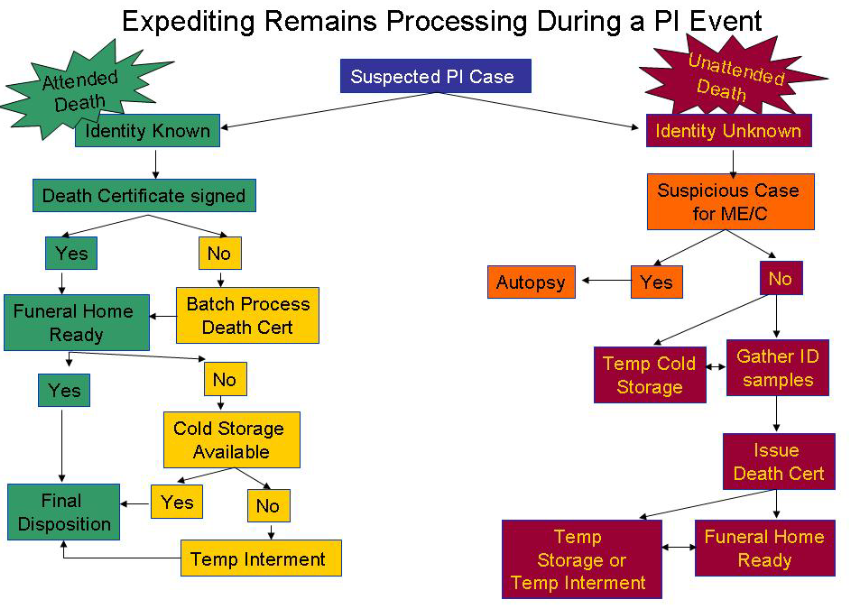