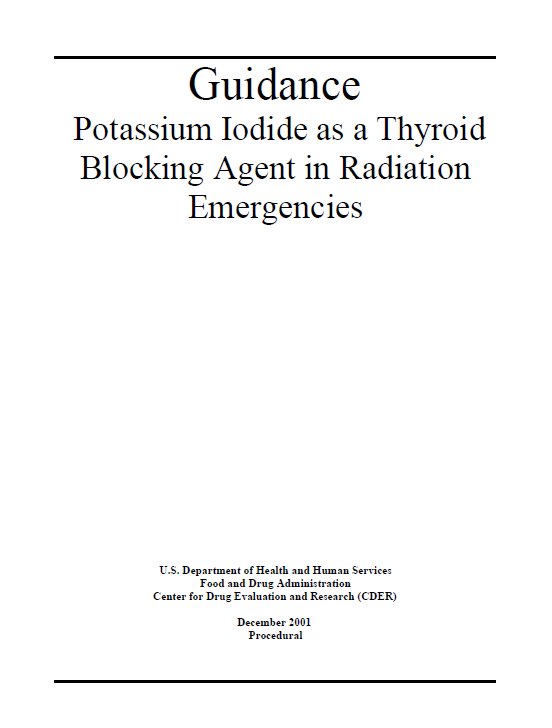 The objective of this document is to provide guidance to other Federal agencies, including the Environmental Protection Agency (EPA) and the Nuclear Regulatory Commission (NRC), and to state and local governments regarding the safe and effective use of potassium iodide (KI) as an adjunct to other public health protective measures in the event that radioactive iodine is released into the environment. The adoption and implementation of these recommendations are at the discretion of the state and local governments responsible for developing regional emergency response plans related to radiation emergencies.

This guidance updates the Food and Drug Administration (FDA) 1982 recommendations for the use of KI to reduce the risk of thyroid cancer in radiation emergencies involving the release of radioactive iodine. The recommendations in this guidance address KI dosage and the projected radiation exposure at which the drug should be used.

These recommendations were prepared by the Potassium Iodide Working Group, comprising scientists from the FDA’s Center for Drug Evaluation and Research (CDER) and Center for Devices and Radiological Health (CDRH) in collaboration with experts in the field from the National Institutes of Health (NIH). Although they differ in two respects (as discussed in Section IV.B), these revised recommendations are in general accordance with those of the World Health Organization (WHO), as expressed in its Guidelines for Iodine Prophylaxis Following Nuclear Accidents: Update 1999 (WHO 1999).

A. Use of KI in Radiation Emergencies: Rationale, Effectiveness, Safety

For the reasons discussed above, the Chernobyl data provide the most reliable information available to date on the relationship between internal thyroid radioactive dose and cancer risk. They suggest that the risk of thyroid cancer is inversely related to age, and that, especially in young children, it may accrue at very low levels of radioiodine exposure. We have relied on the Chernobyl data to formulate our specific recommendations below.

The effectiveness of KI as a specific blocker of thyroid radioiodine uptake is well established (Il’in LA, et al., 1972) as are the doses necessary for blocking uptake. As such, it is reasonable to conclude that KI will likewise be effective in reducing the risk of thyroid cancer in individuals or populations at risk for inhalation or ingestion of radioiodines.

Short-term administration of KI at thyroid blocking doses is safe and, in general, more so in children than adults. The risks of stable iodine administration include sialadenitis (an inflammation of the salivary gland, of which no cases were reported in Poland among users after the Chernobyl accident), gastrointestinal disturbances, allergic reactions and minor rashes. In addition, persons with known iodine sensitivity should avoid KI, as should individuals with dermatitis herpetiformis and hypocomplementemic vasculitis, extremely rare conditions associated with an increased risk of iodine hypersensitivity.

Thyroidal side effects of stable iodine include iodine-induced thyrotoxicosis, which is more common in older people and in iodine deficient areas but usually requires repeated doses of stable iodine. In addition, iodide goiter and hypothyroidism are potential side effects more common in iodine sufficient areas, but they require chronic high doses of stable iodine (Rubery 1990). In light of the preceding, individuals with multinodular goiter, Graves’ disease, and autoimmune thyroiditis should be treated with caution, especially if dosing extends beyond a few days. The vast majority of such individuals will be adults.