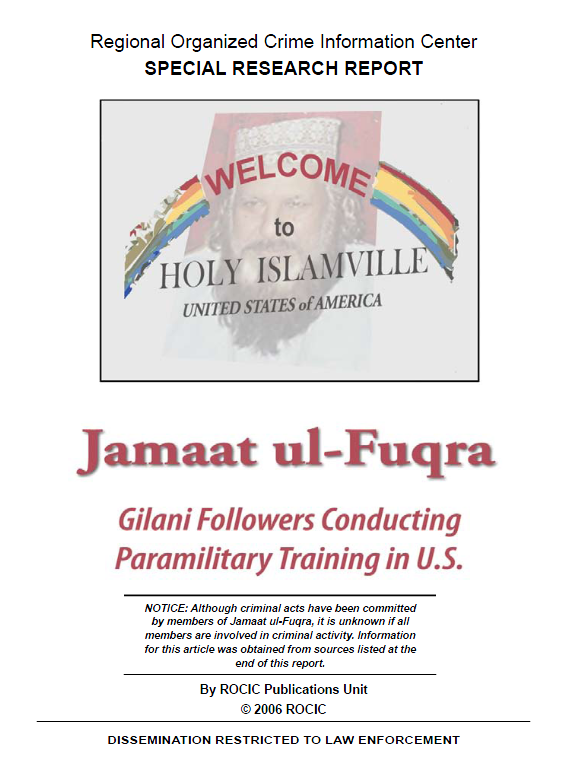 Over the past two decades, a terrorist group known as Jamaat ul-Fuqra, or “Community of the Impoverished,” has been linked to multiple murders, bombings, and various other felonies throughout the United States and Canada. In 1980, a Pakistani cleric named Sheikh Mubarak Ali Gilani began preaching against Western culture at a Muslim mosque in Brooklyn, NY. He promoted Islam as the path to a better life and called for fighters to join his holy war against the Soviet occupation of Afghanistan.

With his new American recruits, Gilani established Islamberg, a 70-acre commune west of the Catskill Mountains near Hancock, NY.

Today, Jamaat ul-Fuqra has more than 35 suspected communes and more than 3,000 members spread across the United States, all in support of one goal: the purification of Islam through violence. Seven of these communes are in the ROCIC region in the states of Alabama, Georgia, Oklahoma, South Carolina, Tennessee, Texas, Virginia, and West Virginia.

Gilani is now known as an international terrorist. In Khartoum, in December 1993, at a major jihadist gathering, or “terrorist roundtable,” Gilani and other terrorist leaders, such as Osama bin Laden, were caught on film by the Canadian Broadcasting Company chanting, “Down, down USA! Down, down CIA!” and “Death to the Jews!”

Gilani’s ideology begins with the idea that moderate Muslim leaders have lost the moral authority and vision to achieve “victory” and that he is the only true defender of Islam. He considers all those who do not follow the tenets of Islam (as laid out in the Koran) to be his enemies. This includes non-Muslims as well as Muslims he deems as heretics.

During Jamaat ul-Fuqra’s formation, Gilani primarily targeted black American Muslim converts from the inner city, mostly those with criminal backgrounds. Gilani used their hostility and cynicism toward Western society to aid in their adoption of his extremist beliefs.

His followers call themselves the “Soldiers of Allah.” They believe Gilani can perform miracles and are unquestioningly obedient to his teachings. Members of Jamaat ul-Fuqra are known to be Islamist extremists with much hatred toward their enemies.

Several covert paramilitary training compounds exist within some of the communes. Law enforcement are aware of seven training facilities in the ROCIC region: 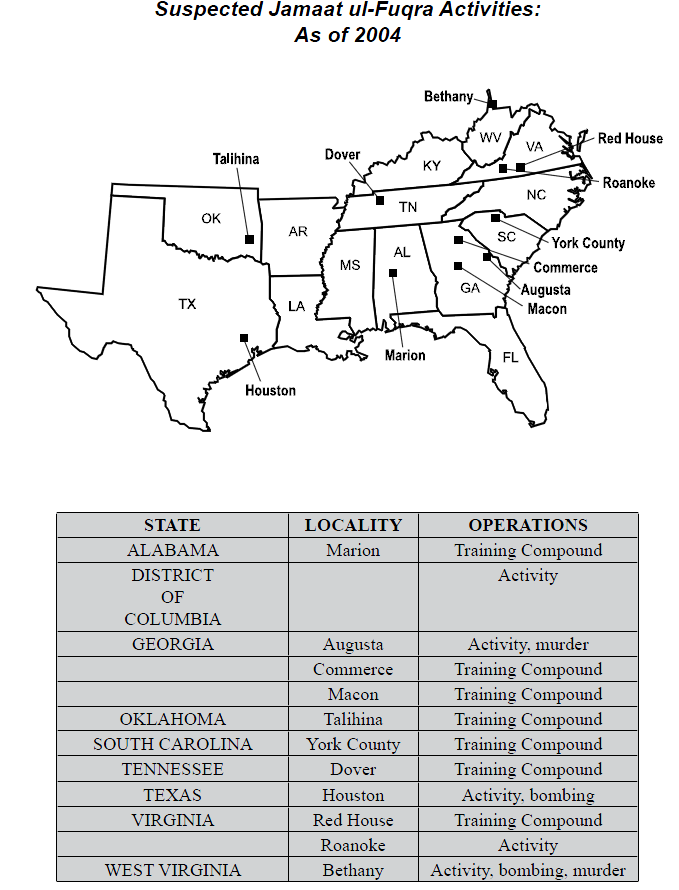