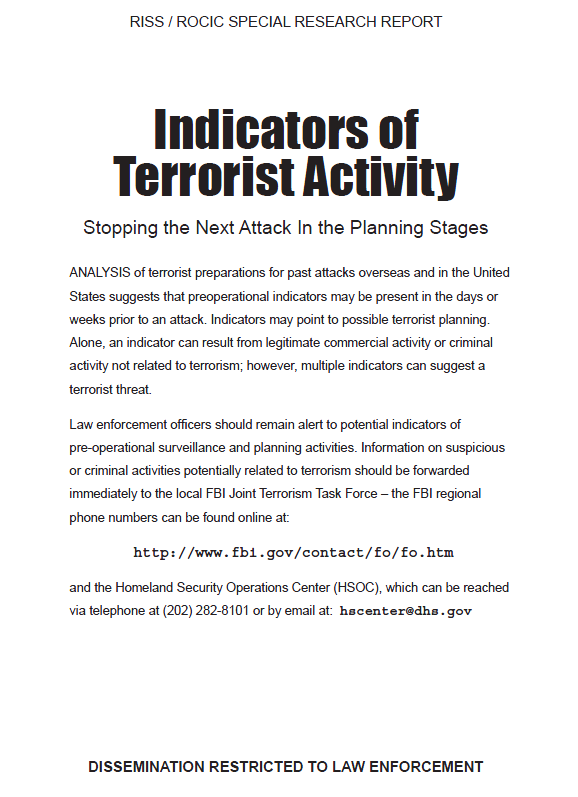 ANALYSIS of terrorist preparations for past attacks overseas and in the United States suggests that preoperational indicators may be present in the days or weeks prior to an attack. Indicators may point to possible terrorist planning. Alone, an indicator can result from legitimate commercial activity or criminal activity not related to terrorism; however, multiple indicators can suggest a terrorist threat.

Excerpted from FBI Bulletin 125—April 30, 2004
Terrorist operatives worldwide will likely continue to
rely on vehicle-borne improvised explosive devices
(VBIEDS) as a method of attack. The following indicators
may point to possible terrorist planning. Alone, each
indicator can result from legitimate commercial activity
or criminal activity not related to terrorism; however,
multiple indicators combined with other information
can possibly suggest a terrorist threat or an impending
VBIED attack.

Suspicious attempts to modify equipment may provide a
possible indication of pre-operational activity. Transactions
and modifications may include:

• purchasing inquiries related to commercial delivery or
utility vehicles by individuals who seem to lack industry
knowledge, credentials, or experience

• vehicles that have been modified to handle heavier
loads, create additional storage areas, or increase
fuel capacity or vehicle speed

• discovery of batteries, wiring, timers or other power
supply or switching components in the passenger
compartment of a vehicle

• theft or purchase of paint or decals, or the discovery
of painting patterns similar to those found on delivery,
security, emergency, response, or utility vehicles

Excerpted from FBI Bulletin 132—June 17, 2004
Investigation into terrorist financing is an important component
of overall U.S. counterterrorism investigative efforts.
The FBI has compiled the following list of potential
terrorism financing indicators and other reportable items
to assist agencies in recognizing activities of terrorists
and their support networks.

Although patterns of conduct consistent with the
indicators may point to criminal activity, they may not
necessarily be linked to terrorism. Indicators of money
laundering, for example, are often similar to indicators of
terrorists’ financial transactions.

• engage in activities in the U.S. that do not match the
stated purpose of their visas

• exhibit unusual concern for secrecy, particularly with
respect to their identity, type of business, or property
held

• lifestyle not consistent with known, legitimate sources
of income

Excerpted from FBI Bulletin133—June 24, 2004
Traditional seaborne mines have been used to offset
military superiority, interdict enemy maritime logistics,
disrupt an adversary’s maritime commerce, or deny use
of a waterway, coastal area or facility.

Although large scale, military style mining operations
against the U.S. are assessed to be beyond the capabilities
of transnational terrorists, the technological sophistication
demonstrated in evolving improvised explosive
device (IED) construction raises the possibility of limited,
geographically dispersed waterborne IED attacks.
Analysis of recent incidents involving floating IEDs have
revealed no significant similarities in construction, suggesting
these are isolated cases involving individuals
rather than incidents of transnational terrorism.

Nonetheless, these incidents demonstrate potential
vulnerabilities, and the possibility exists that extremists
may choose similar tactics to conduct attacks against
the U.S. maritime infrastructure.

• combinations of IEDs and styrofoam blocks

• sealed PVC pipes with IEDs attached or encapsulated
inside

• IEDs attached to floats or buoys

Excerpted from FBI Bulletin 141—August 6, 2004
Al-Qaeda has apparently considered the use of helicopters
as an alternative to recruiting operatives for fix-wing
aircraft operations. Terrorists may view helicopters as
an attractive weapon due to their maneuverability and
non-threatening appearance when flying at low altitudes
in urban environments. Recent reporting indicates that
Al-Qaeda may be targeting key financial institutions in
New York City, New York, Northern New Jersey, and
Washington, D.C., with the intention of dealing a severe
blow to the U.S. economy.

Operatives may also contract a flight from a charter or
tour service to facilitate a hijacking. Helicopters could
be used in suicide attacks against high-profile ground
targets or to attack the public in open areas, including
parades and sporting events, with explosives carried on
board to increase the destructive effects.

Helicopters could conceivably be used to introduce
chemical or biological weapons into high-rise building
ventilation systems, which may be more easily breached
from the roof than from lower floors. Aerial spraying
equipment used to disperse fertilizer or insecticide could
be used to efficiently deliver these toxic substances.
During authorized searchers, law enforcement officers
should take note of helicopter-related images, including
photographs of interiors and exteriors of rotary-wing aircraft,
helicopter tour company brochures, and accompanying
aerial photographs of economic and commercial
centers