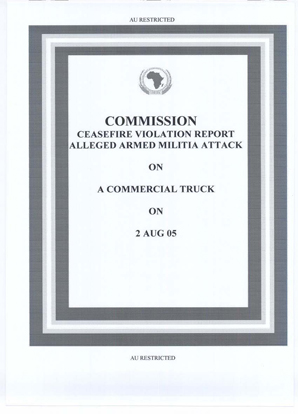 INTRODUCTION
I. An alleged case of Armed militia/Janjaweed attack on a commercial truck about 5kms after Donkey Dreissa, along Graida Road was investigated by Team 2 Echo. Reference A is the Team’s investigation report.

2. The Team established that the vehicle was attacked by Armed militia/Janjaweed, 7 people were killed including 2 policemen who were escorting the truck. Also 6 others persons were injured in the attack. The team further confirmed that the attackers also robbed the passengers of their possessions.

3. On 2 Aug 05, some Armed militias/Janjaweed attacked and robbed commercial truck along Donkey Dreissa – Graida Road killing 7 people and injuring 6 others in the process. The CFC considered the act as a ceasefire
violation committed by the Armed militia/Janjaweed.

4. It is recommended that;

a. The GDS Police conduct constant patrols along these roads to prevent banditry activities.

b. Efforts should be made by the GOS to disarm the Armed militias/Janjaweed.

6. On 3 Aug OS, the team interviewed with YAQOUB BAKHIT (Umda and Acting King of GIRAYDA) and he informed the team that:

a. The sad incident occurred on 2 Aug 05 at about 1430 along DONKEY DRESSA – GIRAYDA road, when the vehicle was coming back from NYALA fully loaded with goods and about 30 passengers.

c. The bandits opened fire on the vehicle on entering the ambush site.

d. The 3 police escort retumed fire but due 10 the intensive fire from the bandits the 3 police men were over powered.

e. The casualties recorded in the incident, were up to 7 dead (among which 2 were police men) and 6 wounded people (4 of which sustained gunshot injuries) and were all admitted in OIRAYDA hospital.

f. The attack was carried out by a group of armed Arab men all dressed in JALLABIA and covering their faces with TURBAN,

g. He prepared a patrol for rescuing and trace the bandits until ABU AGURA but as result of bad weather all efforts proved wrong.

7. The team also visited the police station where they received same information and collected the name of all casualties as follows: 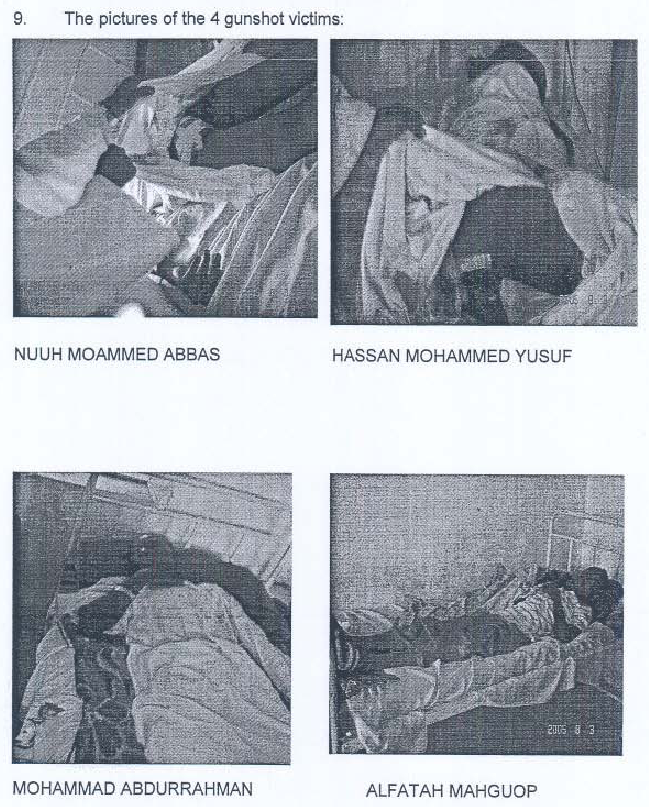 a. Suggested Sector 2 to cover commercial vehicle with escort team at least one In a week.

b. Frequent patrol should be carried out

by bott1 the local police and the AU teams.