A previous version of the following manual from 2007 was originally published by the Federation of American Scientists. 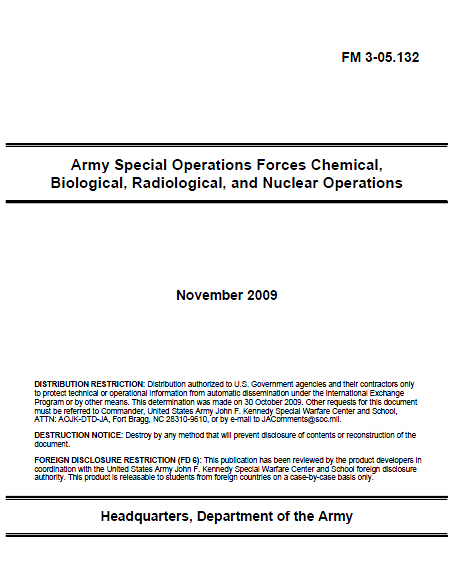 FM 3-05.132 serves as a reference document for ARSOF commanders and staff, training developers, and doctrine developers throughout the United States Army Special Operations Command (USASOC). It provides commanders with doctrinal considerations for organizing their individual CBRN operations and putting them into action to accomplish missions.

1-1. The United States Special Operations Command (USSOCOM) is responsible for synchronizing planning for global operations against terrorist networks, which it does in coordination with other combatant commands, the Services, and, as directed, appropriate United States (U.S.) government agencies. As directed, USSOCOM executes global operations against terrorist networks. As a subordinate unit, the USASOC has an important role in CWMD operations and recognizes that the probability of operating in a CBRN environment exists; therefore, ARSOF must specifically organize, train, and equip to be successful in a CBRN mission. The term CBRN environment includes the deliberate, accidental employment, or threat of CBRN weapons and attacks with CBRN or toxic industrial materials (TIMs). ARSOF CBRN forces provide CBRN reconnaissance, surveillance, and exploitation support for SOF in support of strategic, operational, and tactical objectives in all environments (permissive, uncertain, and hostile) to support the geographic and functional combatant commanders’ (CCDRs’) intent and objectives. This section defines the relationships between ARSOF core tasks and the military mission areas identified in the NMS-CWMD and describes how ARSOF CBRN units support the execution of the ARSOF core tasks across the spectrum of combating weapons of mass destruction (CWMD) operations (Figure 1-1, page 1-2). Joint Publication (JP) 3-40, Combating Weapons of Mass Destruction, Chapters 1 and 4, provide a complete description of the NMS-CWMD.

1-2. ARSOF units are capable of providing a wide range of specialized support to CWMD operations but are generally not resourced to conduct large-scale CWMD operations. As such, the CBRN capabilities within ARSOF are mostly used for passive defense and to support the execution of ARSOF core tasks. CBRN capabilities are aligned with the four subtasks of CBRN passive defense: sense, shape, shield, and sustain. In addition to minimizing the vulnerability to and effects of WMD attacks, the ARSOF CBRN capabilities also minimize vulnerability to the effects of TIM accidents or events.

1-46. The North Atlantic Treaty Organization (NATO) defines a biological agent as a microorganism (or its toxin) that causes disease or deterioration of material. Biological agents are generally directed against the respiratory system to maximize the organism’s ability to diffuse directly into the bloodstream and bodily tissue. Individual protective equipment (IPE) generally provides protection against a biological warfare (BW) attack. Generally, biological warfare agents (BWAs) may be classified into the following broad groups:

1-47. Most organisms are naturally occurring and can be found in almost any environment. Without proper hygiene and appropriate prophylactic measures, they have the capability to rapidly cause incapacitating or lethal illness. When used as a warfare agent, biological agents can be disseminated in aerosol form, by vectors such as mosquitoes and ticks, or through contaminated food or water. JP 3-11 provides additional biological agent operational planning considerations.

1-48. Nuclear threats are associated with the explosive detonation of special nuclear material. The radiological agent (RA) threat deals with radiation hazards and radioactive materials that may be in more common use. The threat of low-level radiation exists in all operations. This threat can exist in certain expended rounds (depleted uranium), damaged or destroyed equipment, or contaminated shrapnel. It also may occur from inadequate nuclear waste disposal, deterioration of nuclear power facilities, damage to facilities that routinely use radioactive material or sources, and the direct use of radioactive materials or compounds by an adversary (terrorism). Specialized detection equipment is required to detect lower levels of radiation.

1-49. Nuclear weapons are similar to conventional weapons insofar as their destructive action is due mainly to blast or shock. However, nuclear explosions can be millions of times more powerful than the largest conventional detonations. For the release of a given amount of energy, the material mass required for a nuclear explosion would be much less than that of a conventional explosion. The radiation effects of a nuclear explosion are divided into two categories: initial and residual. A nuclear detonation produces its damaging effects through four primary ways: blast, thermal radiation, ionizing radiation, and electromagnetic pulse (EMP).

1-50. The blast wave created by an explosion produces a shock front that travels rapidly away from the fireball, behaving like a moving wall of highly compressed air (approximately 900 miles per hour [mph]). When this blast wave strikes the surface of the earth, it is reflected back, causing a second wave to be formed. The second wave will eventually merge with the first wave (called Mach effect), and the overpressure will essentially double. Winds generated by the blast of the weapon could reach several hundred mph at ground zero (GZ), and be as high as 70 mph as far as 6 miles away.

1-51. Immediately after a detonation, weapon residues emit primary thermal radiation (X-rays) that are absorbed within a few feet of air. This energy then reemits from the fireball as thermal radiation consisting of ultraviolet, visible, and infrared rays. The following thermal pulses result from that detonation:

1-54. Although less lethal than current CW agents, industrial materials are often available in enormous quantities, do not require expensive research programs, are easily mass-produced, do not violate the Chemical Weapons Convention, and can still produce mass casualties. TIMs could be released from industrial plants or storage depots through battle damage, as consequence of a strike against a particular facility, or as a desperation measure during military operations. They could also be used as improvised chemical weapons and have potential for inclusion in clandestine programs or contingency plans. Note: IPE does not protect against all TIMs. For example, IPE will not protect the wearer from ammonia-based or chlorine-based industrial chemicals.

1-55. Riot control agents (RCAs) are chemicals that produce temporary irritating or disabling effects when in contact with the eye or when inhaled. Generally used in the control of violent disorders, RCAs can be effectively used to contaminate terrain and to cause degrading effects on individuals, requiring them to use IPE for protection. U.S. policy does not classify RCAs as CW agents. Presidential Executive Order (EO) 11850, Renunciation of Certain Uses in War of Chemical Herbicides and Riot Control Agents, establishes the national policy for the use of RCAs by U.S. forces in combat.