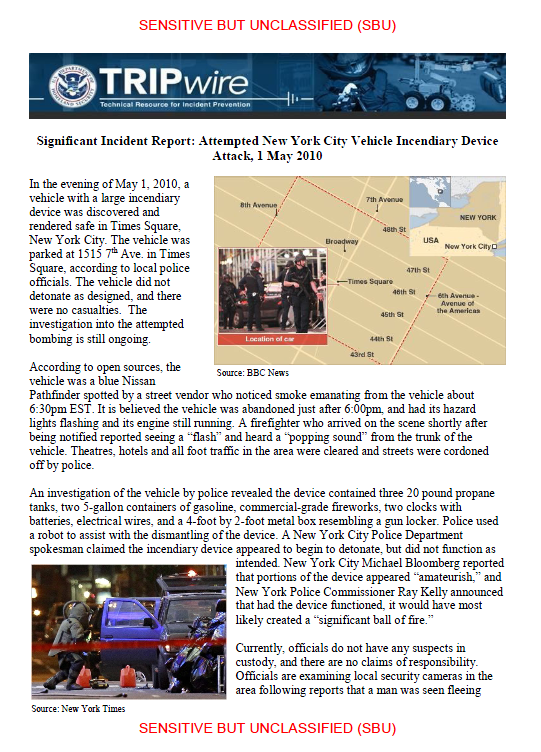 In the evening of May 1, 2010, a vehicle with a large incendiary device was discovered and rendered safe in Times Square, New York City. The vehicle was parked at 1515 7th Ave. in Times Square, according to local police officials. The vehicle did not detonate as designed, and there were no casualties. The investigation into the attempted bombing is still ongoing. According to open sources, the vehicle was a blue Nissan Pathfinder spotted by a street vendor who noticed smoke emanating from the vehicle about 6:30pm EST. It is believed the vehicle was abandoned just after 6:00pm, and had its hazard lights flashing and its engine still running. A firefighter who arrived on the scene shortly after being notified reported seeing a “flash” and heard a “popping sound” from the trunk of the vehicle. Theatres, hotels and all foot traffic in the area were cleared and streets were cordoned off by police.

An investigation of the vehicle by police revealed the device contained three 20 pound propane tanks, two 5-gallon containers of gasoline, commercial-grade fireworks, two clocks with batteries, electrical wires, and a 4-foot by 2-foot metal box resembling a gun locker. Police used a robot to assist with the dismantling of the device. A New York City Police Department spokesman claimed the incendiary device appeared to begin to detonate, but did not function as intended. New York City Michael Bloomberg reported that portions of the device appeared “amateurish,” and New York Police Commissioner Ray Kelly announced that had the device functioned, it would have most likely created a “significant ball of fire.”

Currently, officials do not have any suspects in custody, and there are no claims of responsibility. Officials are examining local security cameras in the area following reports that a man was seen fleeingfrom the vehicle shortly after it was parked.

Recent and historical bombing attacks against tourist destinations have received international attention for responsible terrorist groups and provided scores of lessons learned for first responders and security structures. Terrorists have employed suicide missions, remote detonation techniques, and vehicle-borne improvised explosive devices (VBIEDs) against a variety of tourist targets – clubs frequented by
foreigners, shopping markets, hotels, theaters, and others. A few of the most notorious bombing attacks against tourists and tourism sites in recent years include clubs and central gathering locations in Bali,
Indonesia, as well as resort towns and market places in Egypt.

Tourist sites are extremely vulnerable to bombing attacks due to the constant movement of visitors, guides, and individuals supporting tourism industries. Tourists carry a variety of luggage
and other articles that could easily conceal an explosive device. Crowds of people visiting a specific site can also provide easy cover for a terrorist.

This attack bears similarities to attacks in the United Kingdom in the summer of 2007. At approximately 1:30 AM on 29 June 2007 in London, an ambulance crew responding to an
emergency call near a popular nightclub called “Tiger Tiger” in the Haymarket neighborhood reported an abandoned silver-green Mercedes-Benz with smoke emanating from the vehicle.
Witnesses reported that the car had been driven erratically prior to crashing into garbage bins outside a nightclub within the crowded theater and nightlife district. The driver reportedly
jumped out of the vehicle after crashing and fled the scene.

Police responding to the incident discovered plastic containers of gasoline together with two gas cylinders, marked as “Patio Gas,” and a large quantity of nails inside the vehicle. Scotland Yard
stated that officers manually disabled the device and cordoned off the area. It is believed that the device was timed to detonate at 2:00 AM, when the street would have been filled with people
exiting from nightclubs.

The use of gas cylinders in IEDs and VBIEDs is common practice for many jihadist and paramilitary groups and has been used frequently in Iraq. Raids by security forces in South America, Asia, and the Middle East have uncovered hidden stashes of various explosive components including gas cylinders. The versatility of these containers has lent itself to many uses. They are sturdy and provide adequate confinement to cause low explosives to detonate. In addition, they are easy to acquire by theft or legitimate purchase and appear innocuous due to their ubiquity.

The attempted attack in Times Square, along with the attempted VBIED attack in London, also has similarities to a 2004 terror plot by al-Qaeda terrorist Dhiren Barot to detonate several cars packed with propane gas cylinders in central London. Barot, an al-Qaeda operative who is currently imprisoned, also plotted simultaneously to detonate VBIEDs in Washington D.C. and in New York City. His planned attack is considered one of the most significant terror plots against Western targets discovered in recent years.