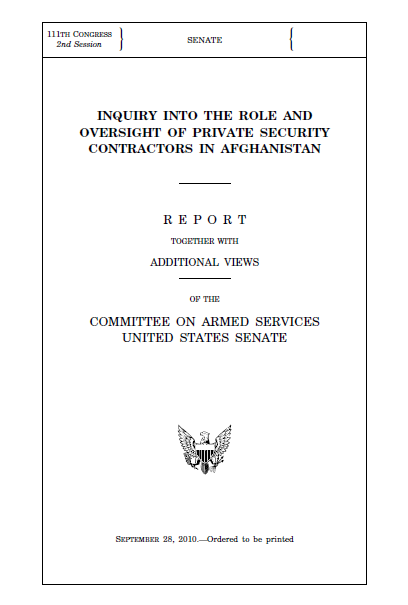 (U) In 2009, the Senate Armed Services Committee initiated an inquiry into private security contractors operating in Afghanistan. In the course of the inquiry, the Committee reviewed hundreds of thousands of pages of documents from the Departments of Defense and State, the U.S. Agency for International Development, and private security contractors. Committee staff conducted more than 30 interviews of military and contractor personnel and solicited written answers from several others. This report is a product of that inquiry.

(U) The Committee’s inquiry uncovered evidence of private security contractors funneling U.S. taxpayers dollars to Afghan warlords and strongmen linked to murder, kidnapping, bribery as well as Taliban and other anti-Coalition activities. It revealed squandered resources and dangerous failures in contractor performance, including untrained guards, insufficient and unserviceable weapons, unmanned posts, and other shortcomings that directly affect the safety of U.S. Military personnel. The Committee also identified serious gaps in government oversight that allowed such failures to persist.

(U) General Stanley McChrystal, the former Commander of U.S. Forces-Afghanistan and the International Security Assistance Force (ISAF), has said that private security contractors are “just not right for a country that is growing law and order.” And yet, U.S. Central Command’s (CENTCOM) Anned Contractor Oversight Directorate (ACOD) reported that, as of May 2010, they were aware of more than 26,000 private security personnel operating in Afghanistan. According to the ACOD, 90 percent of those personnel were working under either U.S. Government contracts or subcontracts. The Committee’s investigation reveals the threat that security contractors operating without adequate U.S. government supervision can pose to the mission in Afghanistan.

(U) In March 2007, the U.S. Air Force Center on Energy and Environment (AFCEE) hired the Environmental Chemical Corporation (ECC), a construction and environmental remediation company, to conduct master planning and construction for the Afghan Air Corps Regional Expansion at Shindand Airbase. ECC contracted with AnnorGroup North America (ArmorGroup) to perform site security at the airbase.

(U) To provide most of their guard force at the base, ArmorGroup initially relied on two warlords, who were known by the company as Mr. White and Mr. Pink. Documents and testimony link those warlords and their successors, to murder, kidnapping, bribery, and antiCoalition activities. The first group of ArmorGroup guards supplied by the warlords began working at the U.S. airbase in June 2007.

(U) According to ECC’s Security Manager, the warlords had been recommended by U.S. Military personnel. In fact, the U.S. Military Team Leader at the forward operating base (FOB)  adjacent to the airbase said that he recommended Mr. Pink as the “point of contact” in the community in an etTort to stop the flow of locals in search of jobs at the airbase from “bothering us while we were trying to do operations.” The Team Leader did not recall recommending Mr. White. Nevertheless, the two warlords and their successors served as manpower providers for ArmorGroup for the next eighteen months – a period marked by a series of violent incidents.

(U) In July 2007, Mr. White was ambushed and shot just outside the airbase. Following the attack, armed ArmorGroup guards loyal to White attempted to leave their posts “to seek revenge” for the attack. It was never determined who was responsible for the shooting. A rivalry was apparently developing between White and Pink, however, and ECC’s Security Manager later suggested that the shooting was likely committed by Pink.

(U) On December 12,2007, Mr. White again came under attack. This time, it was known that the perpetrator was Mr. Pink and his men. The attack escalated into a firefight in the local bazaar with Pink shooting White three times, killing him. ECC’s Security Manager later said of the shooting that it was “k.ind of like a mafia thing. If you rub somebody out, you’ll get a bigger piece of the pie.” Following the shooting, it was reported that Pink was in a local village with a number of Taliban fighters. With White dead and Pink reportedly holed up with the Taliban, ArmorGroup found itself without a guard force provider. The company soon turned to White’s brother to fill that role. He would come to be known by the company as Mr. White n.

(U) Despite reports linking Pink to the Taliban, ArmorGroup continued to employ his men for more than a month after White I’s murder. A company report said the men’s eventual termination from ArmorGroup was a result of reports that they were sending information to Mr. Pink “regarding our movements to and from Herat, the routine of the airfield security,” and “attempting to coerce fellow members of the guard that they should join with Pink … ” ArmorGroup reported that they had “very little choice” but to fire Pink’s men “particularly in light of Pink’s move to the Taliban…”

(U) The threat posed by Pink was not limited to operations on the airbase. In spring 2008, U.S. Forces operating out of the FOB near the airfield, identified Mr. Pink as a potential military target. The U.S. Forces Team Leader said that his team considered Pink a “mid-level Taliban manager” and said that the fact that Mr. Pink resided “immediately outside our front gate… posed a force protection issue for us.”

(U) Using warlords and local strongmen to staff security contracts is not unique to the ArmorGroup and AGMA contracts. EOD Technology, Inc. (EODT), a company that provides security under a U.S. Army contract, also partnered with local strongmen to support its operations at Adraskan, another village in Herat Province, just north of Shindand.

(U) In late 2007, the Combined Security Transition Command-Afghanistan (CSTC-A) selected Adraskan to be the site of a new National Training Center (NTC) for the Afghanistan National Civil Order of Police (ANCOP). On January 5, 2008, the U.S. Army awarded EODT the nearly-S7 million contract to provide site security at the Adraskan NTC. To staff its guard force, EOOT assigned quotas to local strongmen or “notables.” What was most “notable” about the men, however, was their reported affiliation with criminal and anti-Coalition activities.

(U) “General” (sometimes “Colonel”) Said Abdul Wahab Qattili was one of those who recommended men for hire by EODT. Among the men he recommended were some that had been previously fired by ArmorGroup for reportedly providing sensitive security information to Mr. Pink, a Taliban-affiliated warlord. Wahab also lent EODT various weapons, including Soviet-made PKM machine guns and AK-47s.