The following request for participants (RFP) was issued by the San Francisco Public Utilities Commission on June 8, 2012.  The RFP concerns the construction of a wireless control and communications system for managing the city’s future network of dimmable LED streetlights.  The RFP states that future uses for the secure wireless network may include street surveillance, gunshot monitoring, public information broadcasts, electric meter reading and pollution monitoring.  For more information on the project, see Rebecca Bowe’s recent article in the San Francisco Bay Guardian. 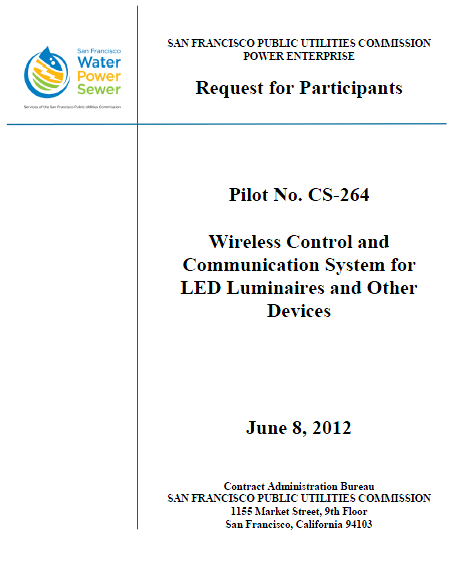 Pilot No. CS-264 To Pilot Wireless Control and Communications System for LED Street Lights and Other Devices

The purpose of the RFP and subsequent Pilot Project is to identify innovative possibilities unknown to the SFPUC that may be relevant to City agencies in the future. Respondents are invited to define the characteristics and features of an innovative solution for LED street light control, and include this description in their submittal. The information below is provided to help Respondents identify products that meet the SFPUC’s desired performance criteria for LED street light controls, and to guide the submittal as is relates to wireless control of LED luminaires. It is not intended to limit the scope of the SFPUC’s interest in multifunctional wireless systems.

C. The following types of systems and/or solutions will not be considered: