The following report was released by the Special Inspector General for Afghanistan Reconstruction on September 10, 2013. 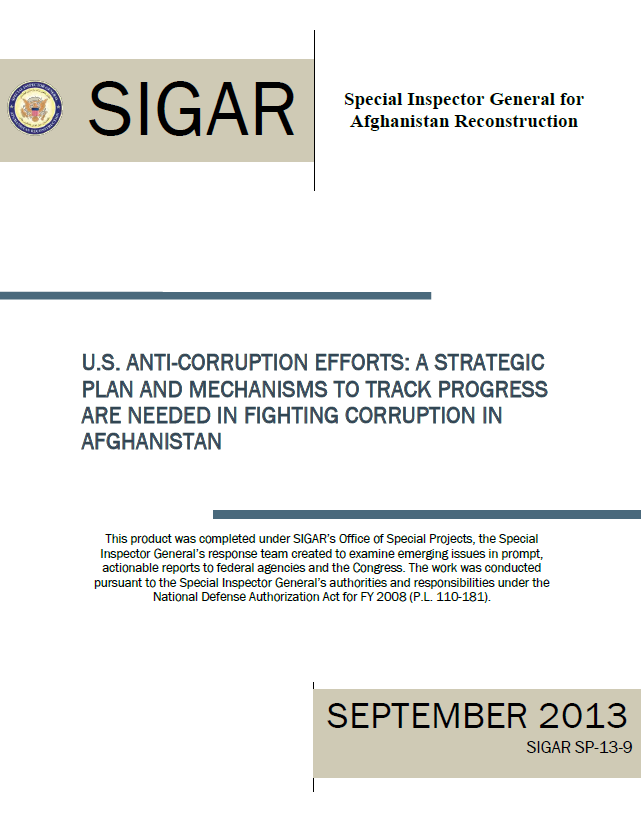 U.S. ANTI-CORRUPTION EFFORTS: A STRATEGIC PLAN AND MECHANISMS TO TRACK PROGRESS ARE NEEDED IN FIGHTING CORRUPTION IN AFGHANISTAN

In August 2010, we reported that more than $50 billion in U.S. assistance had been provided for reconstruction in Afghanistan without the benefit of a comprehensive anti-corruption strategy, and U.S. anti-corruption efforts had provided relatively little assistance to some key Afghan institutions. Since that time, an additional $46 billion has been appropriated for reconstruction in Afghanistan. For the Afghan Ministries of Interior and Defense alone, the United States has committed at least $1 billion in bilateral assistance for its security forces and plans to provide more bilateral aid to the Afghanistan government in the future.

We initiated this review to follow up on the findings of our 2010 report, specifically on the Department of State’s establishment of a comprehensive anti-corruption strategy and to evaluate the progress the United States has made in meeting its anti-corruption goals in Afghanistan. Our objectives for this review were to (1) identify the United States’ strategic goals and objectives for reducing corruption in Afghanistan and (2) assess the overall progress that U.S. agencies have made against those goals and objectives.

As the U.S. military and civilian presence in Afghanistan is reduced, U.S. agencies plan to continue to implement programs and activities to increase the Afghan government’s accountability and ability to combat corruption. To oversee these programs and activities, senior leadership at the U.S. Embassy in Kabul made an effort to coordinate the agencies’ various anti-corruption programs and related efforts by establishing three anti-corruption working groups in 2012. These working groups coordinate agencies’ activities under the broad goals of building Afghan government institutional capacity, improving financial regulations and public financial management, and enhancing revenue generation. However, these groups do not measure the medium- or long-term progress of their programs against comprehensive anti-corruption goals. As a result, State and Embassy Kabul remain unable to assess the overall progress the U.S. government has made to improve the Afghan government’s capacity to combat corruption.

We are making two recommendations to the Secretary of State to better define and direct the U.S. government’s anti-corruption goals and desired outcomes in Afghanistan. In commenting on a draft of this report, State agreed with the importance of establishing clear objectives and benchmarks in order to measure outcomes. In addition, as a result of our findings, State is developing a targeted set of anti-corruption objectives, benchmarks, and plans against which U.S. efforts and resources will be directed and assessed. 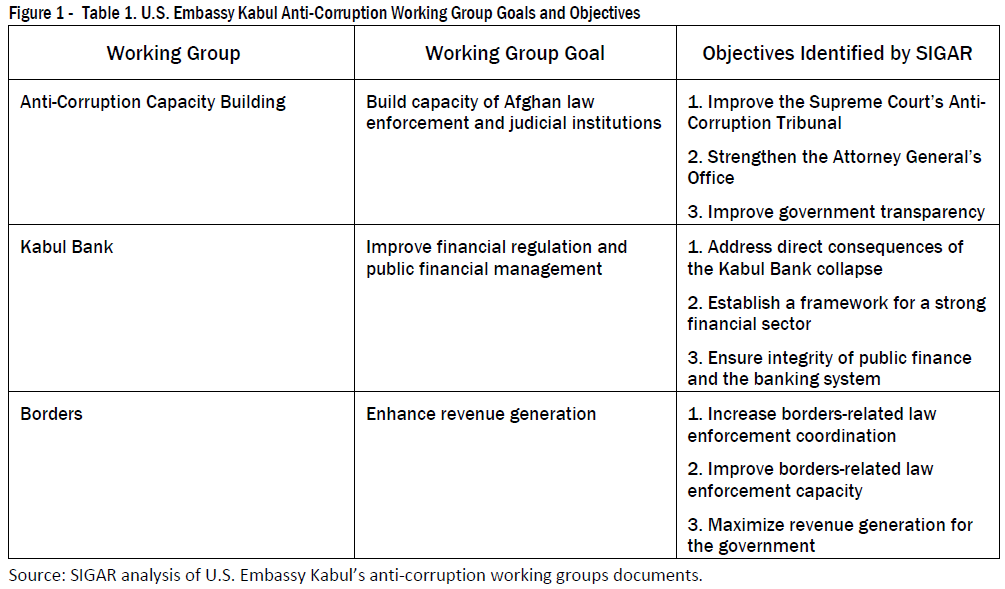