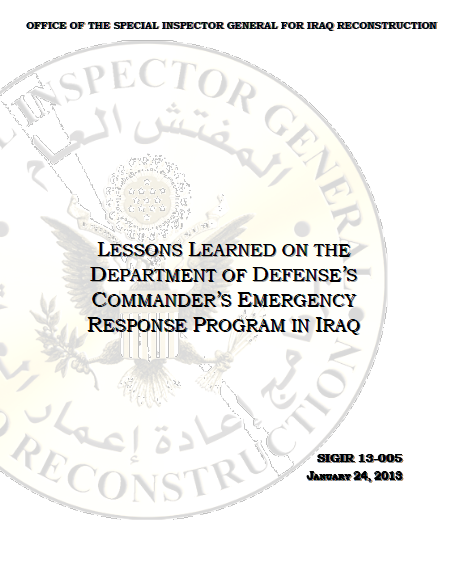 The CERP was formally established by the Coalition Provisional Authority in July 2003 to provide U.S. military commanders in Iraq with a stabilization tool that benefitted the Iraqi people. The program supported urgent, small-scale projects that local governments could sustain, that generally cost less than $25,000, and that provided employment. DoD defined urgent as “any chronic and acute inadequacy of an essential good or service that, in the judgment of the local commander, calls for immediate action.”

Among other things, CERP funds were used to: build schools, health clinics, roads, and sewers; pay condolence payments; support economic development; purchase equipment; and perform civic cleanup. DoD used CERP as a “combat multiplier” whose projects helped improve and maintain security in Iraq through non-lethal means. The program was considered “critical to supporting military commanders in the field in executing counterinsurgency operations” and its pacification effects important to saving lives.

The authoritative guidance for using CERP is the DoD document, Money As A Weapon System (MAAWS), which provides the policies and procedures for administering the program. MAAWS establishes important procedures regarding accountability, including requiring project data to be entered into a system called the CERP Project Tracker when funds were committed to a project. The tracker was supposed to be updated to track obligations, disbursements, and project completion status, among other things.

MAAWS describes the reporting requirements and performance metrics that are to be used to capture how CERP projects benefit the Iraqi people. Specifically, it requires the inclusion of performance metrics in a letter of justification for individual projects costing $50,000 or more.

MAAWS further required that commanders in Iraq coordinate reconstruction efforts and determine project needs with the Department of State (DoS), Provincial Reconstruction Teams (PRTs), U.S. Agency for International Development (USAID), and the Government of Iraq (GOI) to gain the greatest effect. SIGIR previously found that this happened too infrequently. A DoD review of CERP, issued in July 2010, stated that the Department was working to enhance weak coordination with U.S. government agencies, the GOI, and other partners to ensure that CERP projects were appropriately designed and implemented, and met key criteria including a requirement that they be sustainable. 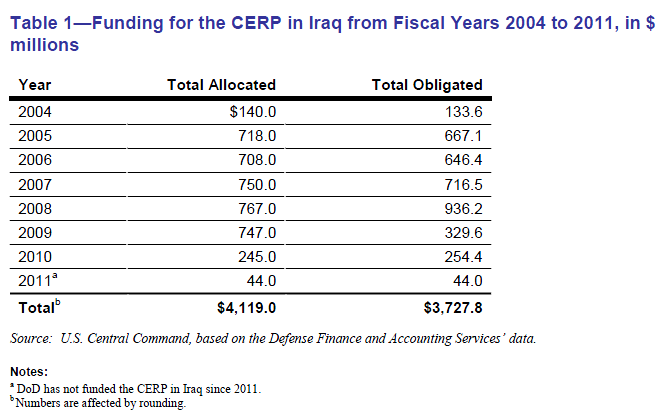 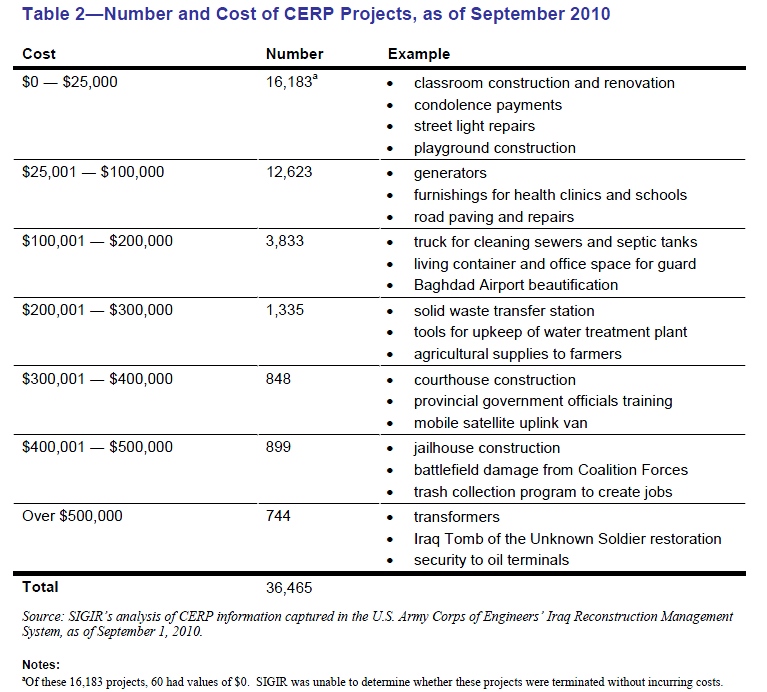 In Iraq, cash transactions were prevalent due to the post-invasion broken banking system. CERP projects were primarily funded with cash. Such cash transactions must have strong controls, especially in a war zone where they are highly vulnerable to theft or misappropriation.

Our January 2011 report on the SOI program concluded the MNC- I exercised weak financial controls over its cash payments to the SOI. In our review of 98 SOI project files, we found that payments were often made directly to an SOI leader to distribute instead of to the individual SOI members directly, without any means of verifying that each SOI received his salary. In addition, the MNC-I often provided the same amount of money each month without determining how many SOI were actually working during that period.

Symptomatic of loose controls over cash, SIGIR’s investigative work caught many individuals who stole CERP funds. For example, a U.S. Army Major was convicted of stealing more than $47,000 in CERP funds that were to be used for humanitarian relief or rebuilding purposes and depositing the funds in his bank account. The Major was deployed with the 1st Brigade, 25th Infantry Division, Mosul, Iraq, from September 2004 to September 2005. From September 2004 to January 2005, he was appointed the paying agent for CERP funds and was responsible for requesting and obtaining the funds from the Army finance office and disbursing the funds. The Major was the Contracting Officer’s Representative and was responsible for day-to-day contact with contractors in Iraq on behalf of the U.S. government. He pleaded guilty in February 2011 and was subsequently sentenced to three years’ probation and required to pay $47,241 in restitution.

In another example, a U.S. Army Captain pleaded guilty to stealing approximately $690,000 in CERP funds while deployed to Iraq. He gained access to the funds (which were intended as payments of security contracts with the Sons of Iraq and humanitarian relief and reconstruction programs) in his capacity as the project purchasing officer for the U.S. Army. The Captain was sentenced to 30 months in prison followed by three years of supervised release and was required to pay $200,000 in restitution, and forfeit his interest in all personal property bought with the stolen money.