The following report was produced under the Strategic Multi-Layer Assessment (SMA) program within the Joint Staff/J-3 and the Rapid Technology Program Office within the Department of Defense Research and Engineering. 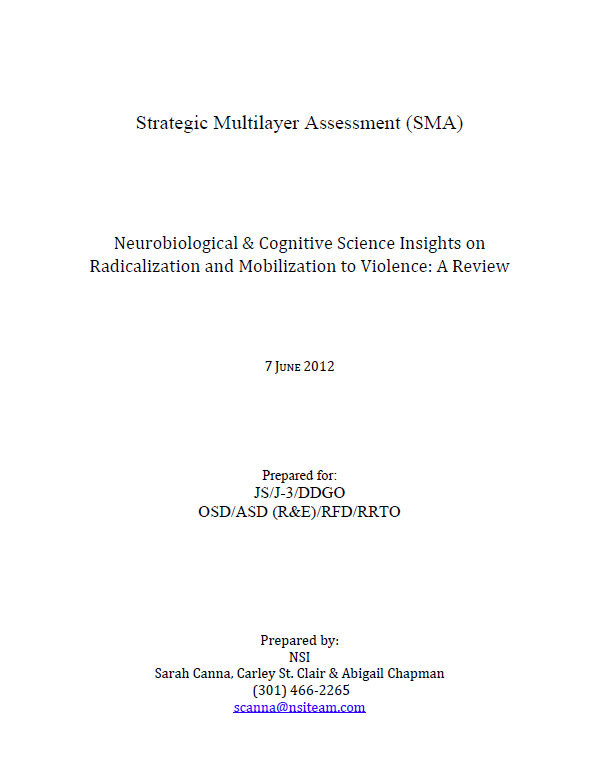 Neurobiological & Cognitive Science Insights on Radicalization and Mobilization to Violence: A Review

This concise review presents theories, findings, and techniques from the neurobiology and cognitive sciences, as well as insights from the operational community, to provide a current and comprehensive description of why individuals and groups engage in violent political behavior. This report is based primarily on recent findings from the academic community. It has been compiled with the policy, planning, and operational community as the primary audience.

The Strategic Multilayer Assessment (SMA) team—in partnership with federal organizations (NIH, AFRL, ERDC, DOS, DARPA, etc.), industry, think tanks, and academia—has explored the concepts of radicalization and political extremism over the last several years, delving deep into analytic methods, subject matter expertise, and modeling experiments to assist military planners and operators in understanding and more effectively responding to the threat of radicalization. This review, intentionally concise, will summarize findings from previously edited volumes, conference proceedings, journal articles, and white papers produced by or for the SMA community exclusively. It is important to note this is not a comprehensive review of all open source material(s) on the topic and as such the reader should be aware the materials presented within were prepared specifically for SMA purposes and may not address all topics or issues within the field of study. This review presents theories, findings, and techniques from the neurobiology and cognitive sciences, as well as insights from the operational community, to provide a current and comprehensive description of why individuals and groups engage in violent political behavior.

In this generic illustration of radicalization (Figure 1), we break down the factors that influence an individual’s decision to radicalize into two sets of factors: endogenous and exogenous. While these terms are most commonly used to describe variables in a model, the radicalization pathway described above is not a model. In this context, endogenous factors refer to a person’s inherent characteristics that cannot easily be changed including genetics, culture, environment, values, and emotions. These characteristics are often necessary, but not sufficient, to cause a person to take violent action. They are represented on the left side of Figure 1 as part of the Opinion Pyramid. Exogenous factors are external influences on a person that are not inherent to one’s personality, culture, genetics, etc. These factors are often triggers that move a predisposed person to take action. Exogenous influences include exposure to narratives, radical social networks, perceived grievances, and traumatic life experiences. Exogenous variables are represented on the right side of the chart under the Action Pyramid.

Research on identity shows that individuals join groups to develop their sense of identity, significance, and purpose. As social beings, humans crave membership in groups, and when we do, we derive great satisfaction from adhering to the group’s specific rules and implicit norms. Furthermore, people who identify strongly with a group and have strong biases against an out group are more likely to behave aggressively towards others in an effort to protect their in-group and sense of identity. This is why the development of strong in-group/out-group differentiation contributes to tension and violence between groups.

Challenging a person’s sacred values often entrench a particular belief and cause a person to push back against the perceived threat. Sacred values are the core tenets a person refuses to sell or compromise. They are often held in common by a population or a subset of a population and define a population’s belief in what the world should be like. Sacred values, like attitudes, are not malleable and are not easily changed.

Culture can influence a person’s predisposition to sympathize with a radical group. A person’s culture influences a person’s behavior and brain function. Exposure to radical beliefs and materials increases a person’s risk of radicalization. Common facets of culture, such as music, poetry, and television shows, also have the potential to influence attitudes, social norms, and even behavior. An individual’s biology and environment may greatly influence a person’s propensity towards radicalization. Drawing from evolutionary biology and psychology, scientists discuss the importance of various factors in influencing a person’s radicalization including inclusive fitness (i.e., enhancing the chances of gene replication), genetic predisposition toward attitudes, and environmental influences on attitudes and beliefs. Additionally, while most violent extremists are mentally sound, neurocognitive imbalances make some individuals prone towards aggression and violence.

Emotion plays a role in the promulgation of violence. Emotion evolves from information processing systems that aid in survival. They are the immediate reactions to events surrounding an individual and act as a filter for understanding and responding to one’s environment. Emotions are one of the major sources of motivation for behavior.

Narratives can alter a person’s beliefs, attitudes, and intentions; they help frame the world in which an individual lives. Additionally, they provide an alternate form of rationality and simplify complex mental tasks that may lead a person to yield to persuasive calls to action. Extremist groups are very good at using narratives to persuade potential recruits that they have a moral imperative to join the cause.

Social networks have been shown to be a critical component of an individual’s radicalization process: people who spend time together influence each other. Various studies from across the fields of psychology, neuroscience, and sociology have highlighted the importance that a person’s social network plays in influencing a person to embrace political violence.

Dehumanization is a mental process that rationalizes the use “violent or degrading acts…not typically reserved for people” against an individual or group. It reduces an individual’s worth to the level of animals or machines. Dehumanized subjects are perceived as not worthy of human emotions such as empathy, reinforcing their degraded status. This process of dehumanization of the other is an important step in an individual’s radicalization: it allows a person to rationalize committing violence against others.