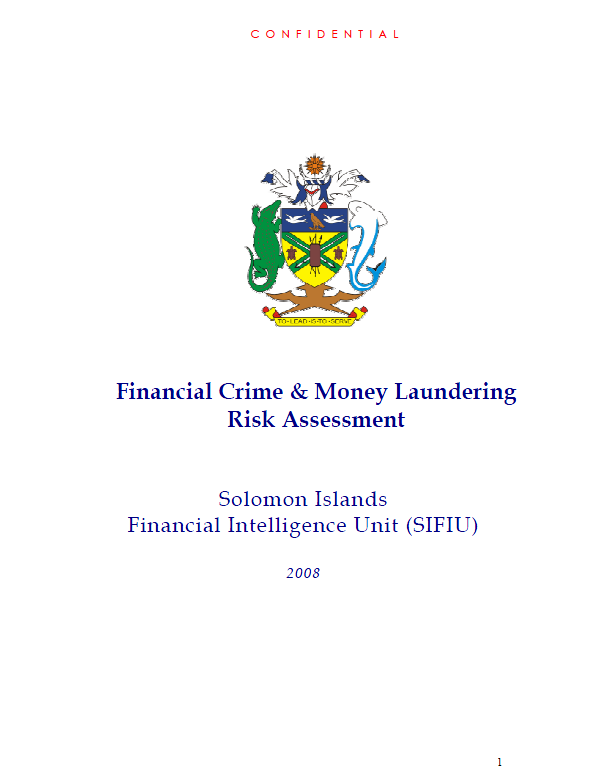 Guided by the 40+9 Recommendations of the Financial Action Task Force (FATF), the Solomon Islands Government has established systems to prevent money laundering and the financing of terrorism. These systems include the creation of:

• The Solomon Islands Financial Intelligence Unit (SIFIU) – comprising
the Head of SIFIU, a Compliance Officer and, more recently, a Financial
Analyst on part-time secondment from the RSIP.

• New sources of financial intelligence – all banks are required by law to
report suspicious transactions to the SIFIU. Since 2006, banks have
reported over [x] Suspicious Transaction Reports. Assisted by SIFIU,
banks are required to train staff to recognise and report suspicious
transactions and to appoint a Money Laundering Compliance Officer
(MLRO). Key new sources of financial intelligence to commence in 2009
include Western Union Money Transfer Service, and Customs and
Immigration will commence monitoring and reporting currency
movements across the border of $50,000 or more in Solomon Islands
Dollars (or foreign currency equivalent). Casinos will also be required to
identify and report suspicious transactions in 2009.

• An Anti-Money Laundering Committee – comprising the Attorney-
General (Chair), the Permanent Secretary of Finance, the Police
Commissioner, and the Governor of the Central Bank of Solomon Islands
(CBSI)

• Educating banks and other financial service providers about the
major sources of financial crime, how to recognise transactions associated
with such crimes, and to better understand the associated ‘money trails’.

Key points of team presentations and discussion are summarised below:

• Corruption: participants noted widespread misuse of official funds, or
office, for private financial gain. Numerous Auditor-General reports
found that corruption is facilitated by widespread non-compliance with
financial legislation and regulations; officials acting outside their
authority; serious breakdown in critical management, accounting and
record keeping systems; proliferation of unauthorised government bank
accounts (over 300); and conflicts of interest not being declared.

• Fraud, forgery and revenue evasion: millions of dollars are lost
through fraud by government employees; officials using positions of
influence to assist associates to receive benefits; lack of action to enforce
revenue collection or to recover overpayments, with suspected criminal
activity (eg. royalties diverted to private accounts). Concern about land
allocations, the issuance of immigration passports and citizenship, and
abuse of aviation revenue.

• Environmental crime: participants noted that illegal logging causes
unsustainable deforestation, harms local communities, generates large
sums to be laundered, and is a major driver of corruption. ‘Hundreds of
millions’ has been lost in foregone forestry and fisheries revenue.
Suspicion persists that foreign vessels are a platform for smuggling SI wildlife to international markets (eg snakes and endangered parrots).
Smuggling of SI dolphins for use in marine entertainment parks can be
especially lucrative – fetching between $800,000 – $1.6m SBD each.
Participants were also concerned by smuggling of SI war relics.

• Sexual exploitation: concern was expressed about trafficking Asian
women into Solomon Islands for prostitution, as allegedly occurs in
neighbouring PNG. Important clientele were considered to be casino and
nightclub patrons, and employees of logging and fishing industries. There
are also reports of Solomon Islands women and girls entering prostitution
in Honiara and in forestry camps.

• Illicit drugs: cannabis production and sale is common. There are
suspicions that cannabis is also smuggled from PNG to Solomon Islands. 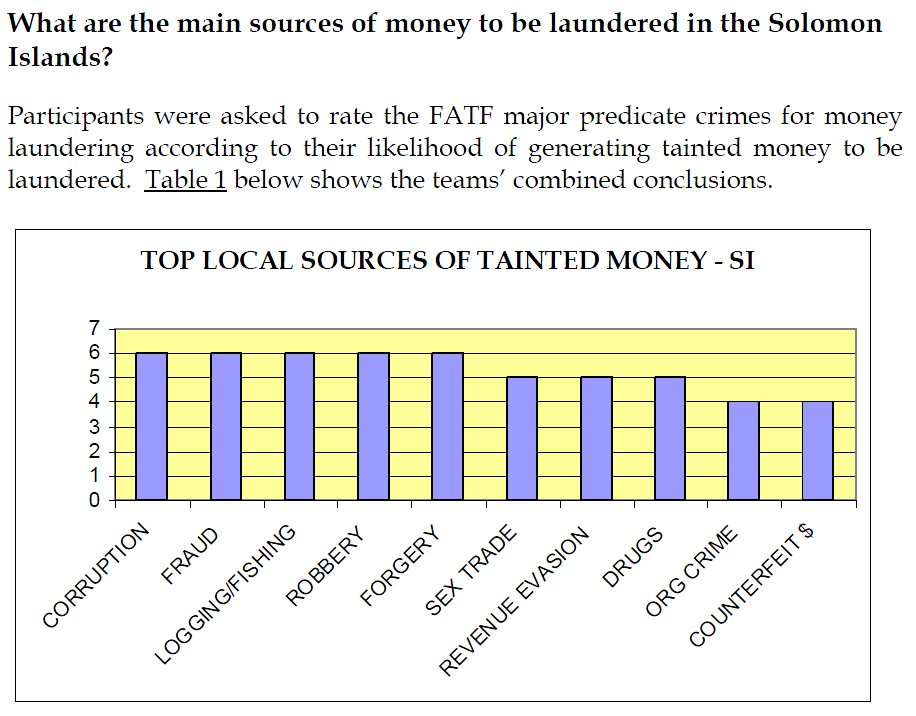 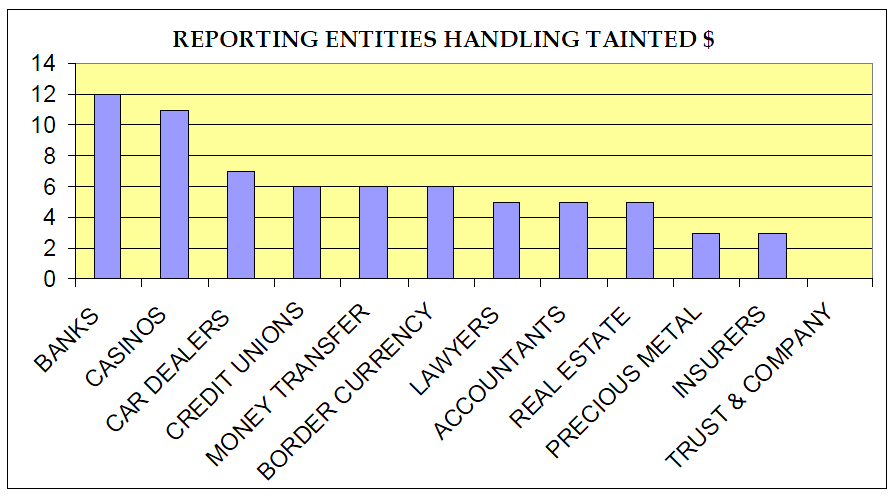 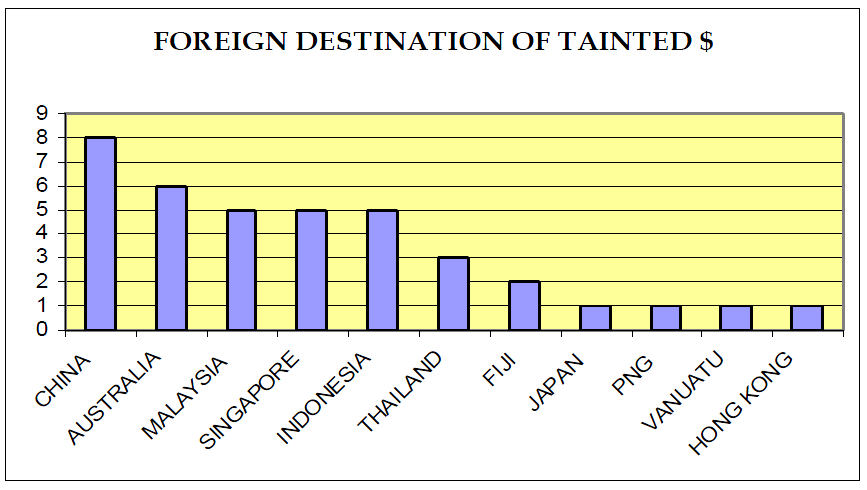 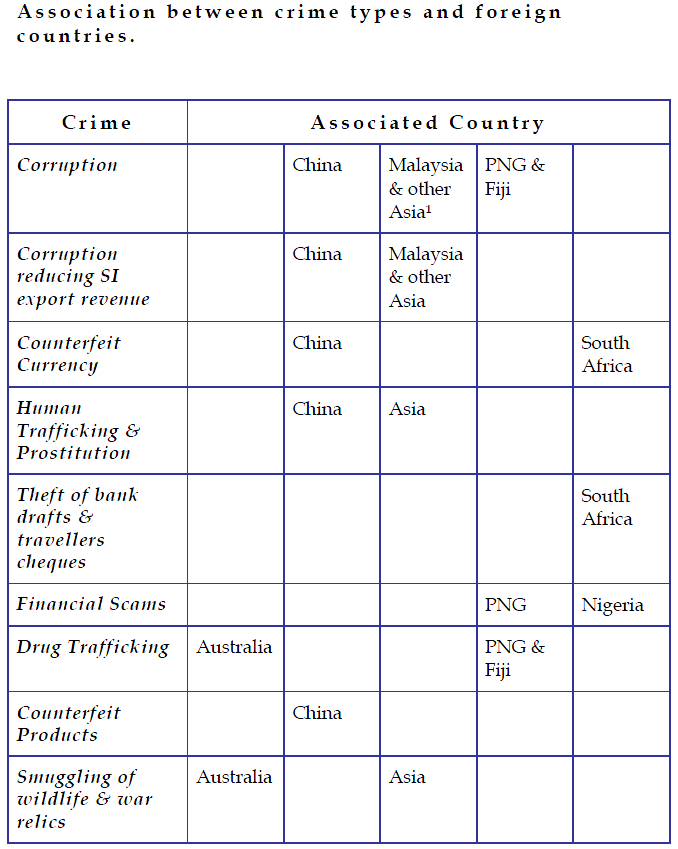