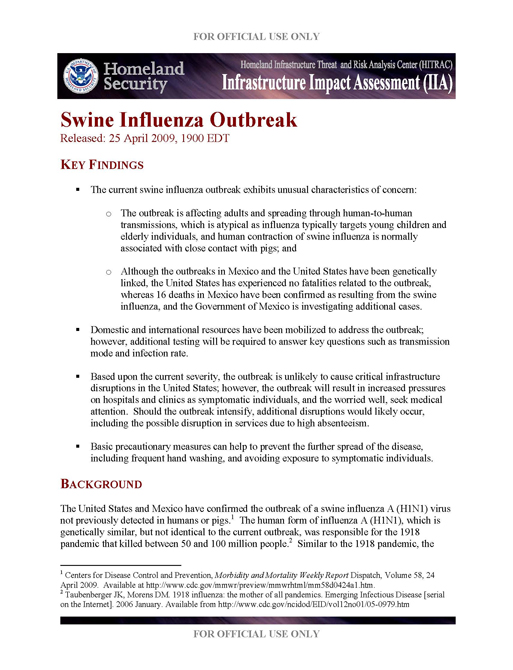 The United States and Mexico have confirmed the outbreak of a swine influenza A (H1N1) virus not previously detected in humans or pigs. The human form of influenza A (H1N1), which is genetically similar, but not identical to the current outbreak, was responsible for the 1918 pandemic that killed between 50 and 100 million people. Similar to the 1918 pandemic, the current outbreak is affecting adults, whereas influenza typically affects young, elderly, or immune-compromised individuals.

The U.S. Centers for Disease Control and Prevention (CDC) confirmed six swine influenza cases in California located in San Diego and
Imperial Counties, and two cases in Texas in Guadalupe County (near San Antonio). An additional two cases have been confirmed in Kansas, and testing is currently underway at Saint Francis Preparatory School in Queens, New York, where students who had recently returned from a trip to Mexico began exhibiting influenza-like symptoms. Results from a New York Laboratory
indicated that eight of the cases tested were positive for H1N1. Samples have been sent to the CDC for confirmation.5 Increased attention to the outbreak is likely to lead to the identification of additional cases as public health professionals increase testing, and symptomatic individuals seek medical care.

The Government of Mexico has confirmed 18 deaths from the swine influenza mostly in Mexico City; however, media reports indicate over 1,000 cases of influenza in Mexico. Testing is  underway to identify which of these cases resulted from the swine influenza, and which resulted from other influenza strains, or co-infection (infection resulting from more than one virus).
Mexico’s surge in influenza cases began in mid-March towards the end of Mexico’s flu season. Mexican officials have closed schools, museums, libraries, and other public buildings, and suspended public events in an effort to curb the spread of the disease. Masks have been distributed, and citizens urged to avoid social activities. The Government of Mexico’s vaccination effort is focused on health workers due to their higher risk of contracting the disease. Efforts are also underway to question outbound travelers to help stem the spread of the disease.

Swine influenza is common among pig populations in the United States, and leads to a high rate of illness, but low mortality rates. Symptoms in pigs include sudden onset of fever, depression, coughing (barking), discharge from the nose or eyes, sneezing, breathing difficulties, eye redness or inflammation, and going off feed. Outbreaks in pig populations typically occur in late fall and winter. The infection rate for humans contracting the disease is typically low, and accompanied by close contact with swine. The current cases do not follow this pattern. 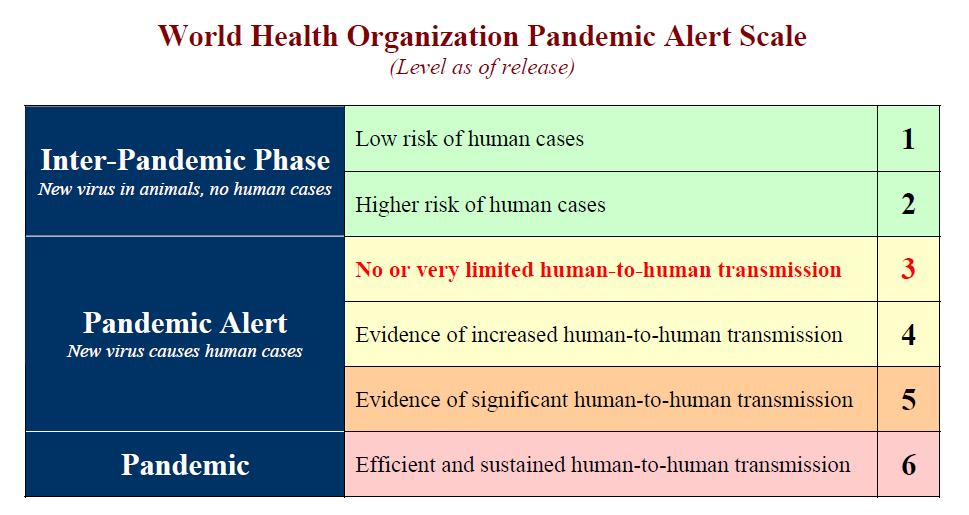