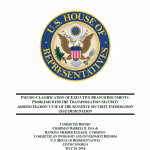 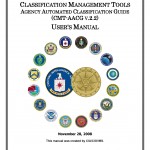 This guide gives Department of Defense (DoD) staff and contractors an overview of the kinds of marking required to protect classified and unclassified controlled information that cannot be disseminated to all audiences. The guide offers an integrated approach to the major requirements for marking and control of information, briefly explaining the reasons for marking and providing examples of correctly marked information. To facilitate information sharing and declassification processes, whenever practicable a classified attachment, addendum, annex, enclosure, or similar section shall be used when classified information constitutes only a small portion of an otherwise unclassified document.

The Implementation Manual is a companion document developed to provide amplifying and explanatory guidance on the syntax and use of the markings contained in the CAPCO Register. While not the policy basis for individual agencies’ use of any particular marking, the Implementation Manual cites the applicable authority and sponsor for each marking. Some of the Dissemination Controls and Non-Intelligence Community Dissemination Control Markings are restricted to use by certain agencies. They are included to provide guidance on handling documents that bear them. Their inclusion in the manual does not authorize other Agencies to use these markings. Non-US Classification and Joint Classification Markings are restricted to the respective countries or international organizations.

The 2008 version of the Director of National Intelligence’s Classification and Control Markings Register was released via a FOIA request and is available in a redacted form via the Federation of American Scientists. We have obtained an unredacted version and are presenting selected pages alongside the previously released version to highlight the information that was redacted, including several NSA dissemination control markings such as FRONTO, KEYRUT, SEABOOT and SETTEE.

Table of equivalent classification markings in various countries throughout the globe.

1.1. Reissues Reference (a) to update policies and guidance on the United States Security Authority for North Atlantic Treaty Organization (NATO) Affairs (USSAN).
1.2. Outlines the method for transmitting NATO security policies within the Department of Defense and assigns responsibilities for maintaining NATO security worldwide.