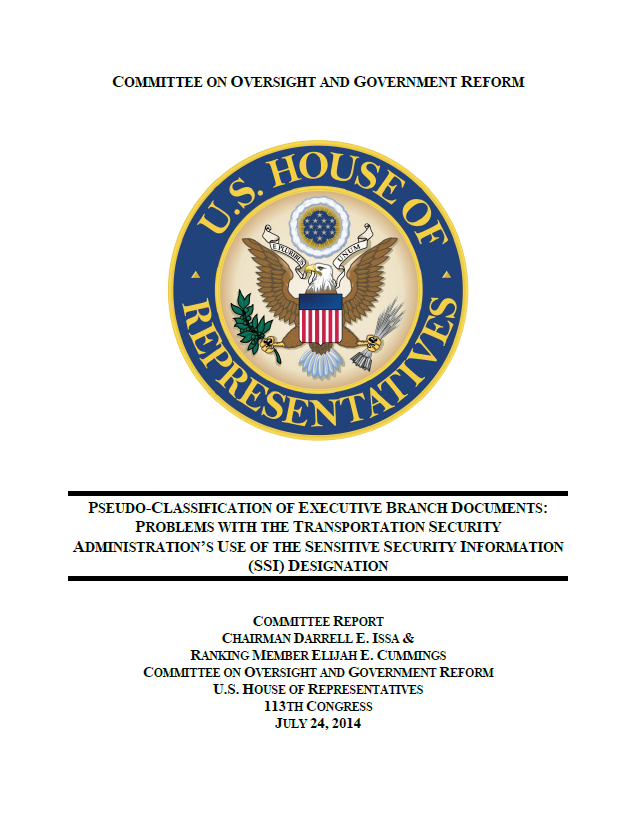 PSEUDO-CLASSIFICATION OF EXECUTIVE BRANCH DOCUMENTS: PROBLEMS WITH THE TRANSPORTATION SECURITY ADMINISTRATION’S USE OF THE SENSITIVE SECURITY INFORMATION (SSI) DESIGNATION

After the 1988 bombing of a commercial airliner that crashed in Lockerbie, Scotland, the FAA made significant changes in aviation security, expanding the definition of SSI to include any information the FAA Administrator determined may reveal systemic vulnerabilities within the aviation system, or vulnerabilities of aviation facilities to attacks. Other definitional expansions included details of inspections and investigations, as well as alleged violations and certain agency findings. The SSI regulation was later expanded in order to limit access to protected information to those persons who have a “need-to-know.”

Due to this contentious relationship and the failure to follow proper procedures, the SSI Office struggled to carry out its statutory obligations effectively. While the TSA Administrator has the final authority to determine whether information is SSI, he is also required under the regulations to submit written explanations of his decisions to the SSI Office in a timely fashion. Unfortunately, the repeated failure to submit written determinations before taking actions on SSI caused a rift between senior TSA leadership and the SSI Office. This rift resulted in inconsistencies, which could be detrimental to the process for protecting sensitive information.

SSI is not classified national security information and therefore not afforded the same protections as classified information. SSI is defined in the Homeland Security Act of 2002 as information obtained or developed during security activities, “if the Under Secretary decides that disclosing the information would (A) be an unwarranted invasion of personal privacy; (B) reveal a trade secret or privileged or confidential commercial or financial information, or (C) be detrimental to the security of transportation.” In order for information to be SSI, it must be related to transportation security, and it must fall under one of the 16 categories of SSI as defined in the SSI regulation.

VI. Inappropriate Use of the SSI Designation to Prevent FOIA Releases

Witnesses interviewed by the Committee testified about instances in which TSA inappropriately withheld documents from FOIA requesters because it was deemed SSI. Former SSI Office Director Andrew Colsky testified that TSA used the SSI designation to prevent the release of documents to FOIA requesters related to Whole Body Imagers (WBIs). He stated:

There’s certain public interest groups out there that do a lot of FOIA requests over these types of things, and one of them did a FOIA request about information related to those scanners, I guess, and their ability to store images or not store images or whatever. And now this is being—you know, coming secondhand, but from a significant number of highly reliable sources, and — I don’t want to say anything to get anybody in trouble — and things that I personally overheard where there was information in the responsive documents that was not by any stretch of the imagination at all SSI, but was either embarrassing or was something that they just didn’t want the other side to know. And there was extreme pressure from again I’ll use the term ‘front office’ to mark it as SSI.

Colsky also discussed other ways that TSA may be withholding information from disclosure under FOIA. He stated:

[C]urrently I sit in the Freedom of Information Act office. And one of the first things I was told when I got there from both attorneys and FOIA processors was, oh, yeah, don’t worry about it, because if you come across embarrassing information or whatever, [the Chief Counsel] will just hide it and come up with an exemption; because if you cover it with a FOIA exemption, it’s so hard for the other person to challenge it, and it will be costly and difficult for them to challenge it, and they’re probably never going to see it anyway, so you just get away with it. That’s the way it’s done.