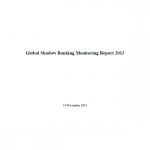 The shadow banking system can broadly be described as credit intermediation involving entities and activities outside the regular banking system. Intermediating credit through non-bank channels can have important advantages and contributes to the financing of the real economy, but such channels can also become a source of systemic risk, especially when they are structured to perform bank-like functions (e.g. maturity transformation and leverage) and when their interconnectedness with the regular banking system is strong. Therefore, appropriate monitoring of shadow banking helps to mitigate the build-up of such systemic risks. The FSB set out its approach for monitoring the global shadow banking system in its report to the G20 in October 2011. This report presents the results of the third annual monitoring exercise following this approach, using end-2012 data. The report includes data from 25 jurisdictions and the euro area as a whole, bringing the coverage of the monitoring exercise to about 80% of global GDP and 90% of global financial system assets. 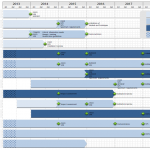 The FSB has roughly estimated the size of the global shadow banking system at around € 46 trillion in 2010, having grown from € 21 trillion in 2002. This represents 25-30% of the total financial system and half the size of bank assets. In the United States, this proportion is even more significant, with an estimated figure of between 35% and 40%. However, according to the FSB estimates, the share of the assets of financial intermediaries other than banks located in Europe as a percentage of the global size of shadow banking system has strongly increased from 2005 to 2010, while the share of US located assets has decreased. On a global scale, the share of those assets held by European jurisdictions has increased from 10 to 13% for UK intermediaries, from 6 to 8% for NL intermediaries, from 4% to 5% for DE intermediaries and from 2% to 3% for ES intermediaries. FR and IT intermediaries maintained their previous shares in the global shadow banks assets of 6% and 2% respectively.

The Single Euro Payments Area is an initiative of the European Central Bank which will unify all of the retail payment markets in the euro area to form a single market. The initiative has three phases: a design phase, followed by a period of integration, followed by total migration to the new system. SEPA is currently nearing completion of its migration phase, indicating that its instruments are generally in use at this time.

In parallel with the preparations of the report and the recommendation requested by the European Council, the Commission services have conducted an assessment of the effects of Turkey’s possible accession on the Union and its policies.