Aviation today provides benefits to the society mainly for transport applications: i.e. it is a typical fall-out of the second industrial revolution. RPAS can add, to the existing aviation activities, digital technologies and massive exploitation of information: in other words bringing aviation in the realm of the third industrial revolution, and so creating highly qualified jobs in the manufacturing sector, in operations and in exploitation of the information acquired through RPAS.

RPAS are themselves multi-systems and involve a great variety of equipment and payloads. Beyond the RPAS manufacturers and system integrators, the RPAS industry also includes a broad supply chain providing a large range of enabling technologies (flight control, communication, propulsion, energy, sensors, telemetry, etc.). Finally, RPAS will generate the emergence of a new service sector. The development of RPAS technologies is likely to create civil spinoffs with significant impact in many sectors.

The consultation conducted by the Commission Services through five public Workshops held from July 2011 to February 2012 (namely the UAS Panel), concluded that the emerging technology of RPAS applied to the development of non-military aviation applications (commercial, noncommercial or governmental non-military) can contribute to boost industrial competitiveness, promote entrepreneurship and create new businesses in order to generate growth and jobs.

The UAS panel highlighted that the potential of RPAS is today limited by the fact that RPAS flight authorisations are still issued on a case by case basis through burdensome procedures and are limited to segregated airspace. Moreover, it showed that some Civil Aviation Authorities have already issued (or are about to issue) their national regulations, not necessarily aligned one-another, thus determining a suboptimal situation in Europe. It finally concluded that more efforts are required in Europe to remove the present fragmentation by developing a seamless regulatory framework and enhancing the coordination of various on-going R&D initiatives. One basic principle underpinning the integration of RPAS, perfectly aligned with ICAO principles, is that RPAS have to be treated just as manned aircraft whilst duly considering the specific character of RPAS.

RPAS rules must also be as light as necessary, in order to avoid an unnecessary burden on the emerging industry. Last but not least, RPAS integration requires addressing adequately the societal impact of RPAS applications by covering important elements as liability, insurance, privacy, etc.

Achieving a broad, safe and swift integration of RPA of all sizes into non-segregated airspace requires an enhanced coordination between the numerous actors and the different activities involved (regulatory, R&D and other measures). It is also recognized that achieving a common regulatory framework covering RPA of all sizes and all types of operations would be an ideal end state.

Since not all key technologies required for RPA to fly in nonsegregated airspace are today mature and standardized, all experts in the world agree that the insertion of RPA in airspace will be gradual and evolutionary: i.e. initially restricted access under specified conditions and subsequent alleviation of the restrictions as soon as technology, regulation and societal acceptance progress.

This roadmap covers RPA of all types with the exception of model aircrafts (defined as a non-human-carrying aircrafts capable of sustained flight in the atmosphere and exclusively used for recreational, sport or competition activity) and toys. Model aircrafts are subject to specific national regulations, if any. Toys are ruled by Directive 2009/48/EC on the safety of toys and are also excluded. This roadmap does not introduce nor modify any existing distinction between model aircraft and aircraft.

RPAS are under control of a remote pilot-in-command for the entire flight under normal conditions and movements on the ground. However, on-board automation can trigger manoeuvres in the absence of pilot command, in specific non-normal failure conditions: loss of command and control (C2) link and imminent risk of mid-air collision with another aircraft. RPAS belong to the wider family of Unmanned Aircraft Systems (UAS), which also comprises ‘autonomous’ RPAS (i.e. no human action is necessary after take-off).

Currently ICAO is limiting the scope of its recommendations to RPAS (for use by international civil aviation). The European roadmap follows the same approach, therefore fully autonomous aircraft will not be considered as part of its scope.

As mentioned above, in line with the ICAO principle expressed in Circular 328, this Roadmap considers RPAS as aircraft. RPAS should be able to operate in airspace, mixed with a variety of manned aircraft (e.g. from gliders to large airliners) under instrument (IFR) or visual (VFR) flight rules adhering to the requirements of the specific airspace in which they are operating.

RPAS have to comply with the aviation rules. In other words, RPAS integration should not impact on the current airspace users (i.e. no degradation of the safety in the air; no disruption of current operations; no modification of ATC procedures; no additional mandatory equipment caused by RPAS). In consequence, the Roadmap considers that RPAS behaviour in operations must be equivalent to manned aviation, including for the air traffic control (ATC). RPAS must comply with the Communication, Navigation and Surveillance requirements applicable to the class of airspace within which they are intended to operate. They must also comply with the trajectory management concept envisaged in SESAR system and with air traffic control rules/procedures. The future aviation system should accommodate flight profiles different from those currently used by CAT, responding to the needs not only of RPAS, but also of aerial work civil aviation traffic and helicopters.

The Roadmap also considers that, as in manned aviation, an RPAS operator will obtain a permission to operate only when essential pre-requisites to safeguard the total aviation safety system are in place. The three following basic pre-requisites are expected to apply to RPAS:

1. RPAS must be approved by a competent authority. According to the International Civil Aviation Organisation (ICAO), they are systems comprising a remotely piloted aircraft (RPA), one or more associated remote pilot station (RPS), the required command and control (C2) links, including those supported by satellite communications, and any other components as specified in the type design of the RPAS.

3. The remote pilot must hold a valid licence.

One of the principal objectives of the aviation regulatory framework is to achieve and maintain the highest possible and uniform level of safety. RPAS shall be designed, manufactured, operated and maintained in such a manner that the risk to people on the ground and other airspace users is at an acceptable level.

This level shall be set through essential requirements adopted by the legislator, following substantial consensus by all involved parties during the rulemaking process. When developing the safety requirements for RPAS, the risk must be considered in relation to the different size of RPAS and the type of operation involved.

In order to help address the challenges of RPAS integration in Europe, the Roadmap identifies the actions that should be taken in the areas of regulation, research and the societal impact of RPAS, taking into account the necessary coordination and interdependencies between these three streams of activities. Each of these areas is developed in a specific annex to the Roadmap:

• Annex 2 presents a Strategic R&D Plan identifying the technology enablers and the research activities necessary to achieve a safe integration of RPAS;

• Annex 3 analyses aspects of the societal impact of RPAS. The following sections provide an overview of each of these annexes. 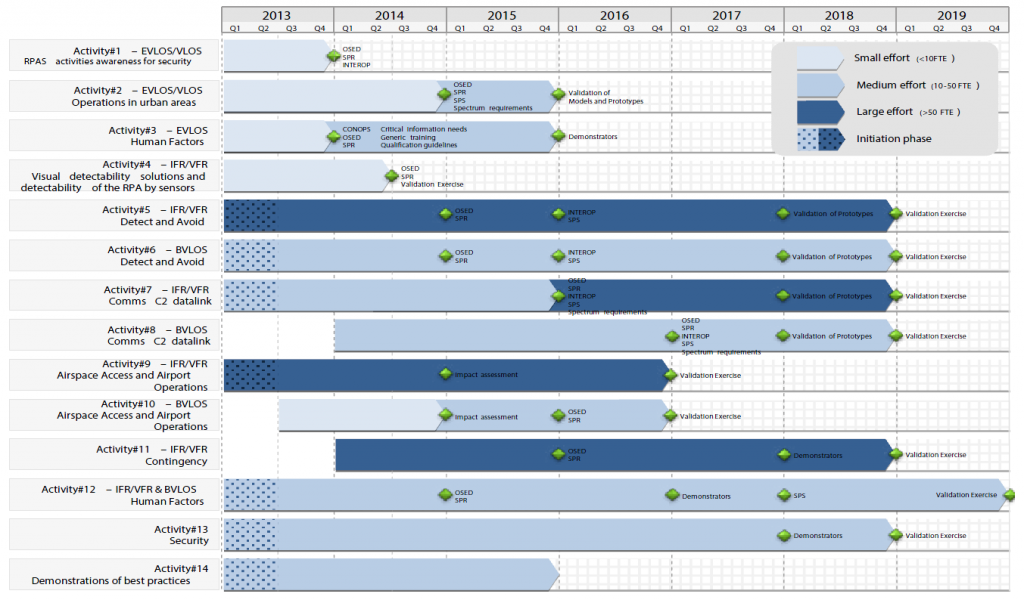