The following green paper was released in March by the European Commission to facilitate comments from stakeholders on reforms to regulation of the shadow banking system. 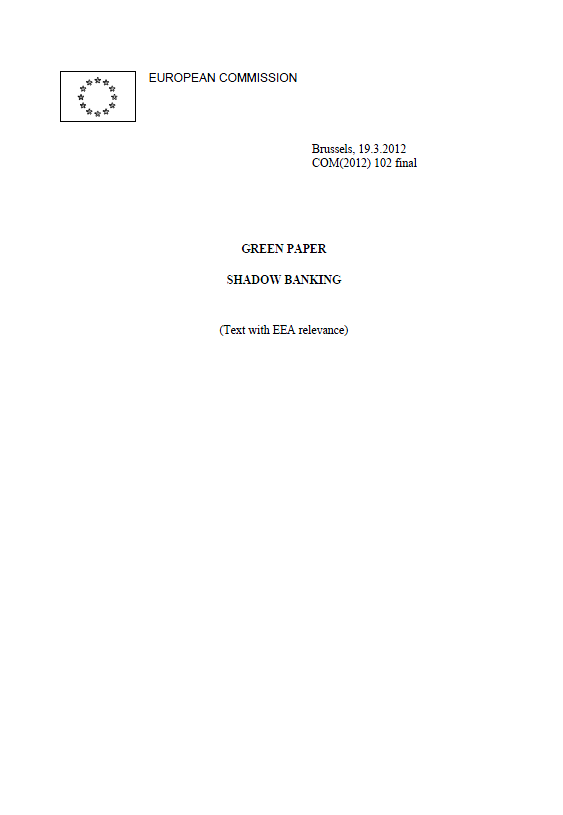 The 2008 crisis was global and financial services were at its heart, revealing inadequacies including regulatory gaps, ineffective supervision, opaque markets and overly-complex products. The response has been international and coordinated through the G20 and the Financial Stability Board (FSB).

The European Union has shown global leadership in implementing its G20 commitments. In line with EU’s Roadmap for Financial Reform, the Union is very advanced in implementing the reforms linked to the G20 commitments. Most of the reforms are now going through the legislative process. In particular, a major achievement has been the recent adoption by the Council and the Parliament of landmark legislation on over-the-counter derivatives. Negotiations are also well developed on measures to revamp capital requirements for the banking sector. Overall, the reforms will equip the EU with the tools designed to ensure that the financial system, its institutions and markets are properly supervised. More stable and responsible financial markets are a pre-condition for growth and for the creation of a business environment that allows companies to thrive, innovate and expand their activities. This in turn enhances the confidence and trust of citizens.

However, there is an increasing area of non-bank credit activity, or shadow banking, which has not been the prime focus of prudential regulation and supervision. Shadow banking performs important functions in the financial system. For example, it creates additional sources of funding and offers investors alternatives to bank deposits. But it can also pose potential threats to long-term financial stability.

In response to the invitations by G20 in Seoul in 2010 and in Cannes in 2011, the FSB is therefore in the process of developing recommendations on the oversight and regulation of this activity.

The FSB’s work has highlighted that the disorderly failure of shadow bank entities can carry systemic risk, both directly and through their interconnectedness with the regular banking system. The FSB has also suggested that as long as such activities and entities remain subject to a lower level of regulation and supervision than the rest of the financial sector, reinforced banking regulation could drive a substantial part of banking activities beyond the boundaries of traditional banking and towards shadow banking.

Against this background, the Commission considers it a priority to examine in detail the issues posed by shadow banking activities and entities. The objective is actively to respond and further contribute to the global debate; continue to increase the resilience of the Union’s financial system; and, ensure all financial activities are contributing to the economic growth. The purpose of this Green Paper is therefore to take stock of current development, and to present on-going reflections on the subject to allow for a wide-ranging consultation of stakeholders.

3. WHAT IS SHADOW BANKING?

The October 2011 FSB report represents the first comprehensive international effort to deal with shadow banking. It focuses on (i) the definition of principles for the monitoring and regulation of the shadow banking system; (ii) the initiation of a mapping process to identify and assess systemic risks involved in shadow banking; and, (iii) the identification of the scope of possible regulatory measures.

First, entities operating outside the regular banking system engaged in one of the following activities:

Second, activities that could act as important sources of funding of non-bank entities. These activities include securitisation, securities lending and repurchase transactions (“repo”).

– Special purpose entities which perform liquidity and/or maturity transformation; for example, securitization vehicles such as ABCP conduits, Special Investment Vehicles (SIV) and other Special Purpose Vehicles (SPV);
– Money Market Funds (MMFs) and other types of investment funds or products with deposit-like characteristics, which make them vulnerable to massive redemptions (“runs”);
– Investment funds, including Exchange Traded Funds (ETFs), that provide credit or are leveraged;
– Finance companies and securities entities providing credit or credit guarantees, or performing liquidity and/or maturity transformation without being regulated like a bank;
and
– Insurance and reinsurance undertakings which issue or guarantee credit products.

The FSB has roughly estimated the size of the global shadow banking system at around € 46 trillion in 2010, having grown from € 21 trillion in 2002. This represents 25-30% of the total financial system and half the size of bank assets. In the United States, this proportion is even more significant, with an estimated figure of between 35% and 40%. However, according to the FSB estimates, the share of the assets of financial intermediaries other than banks located in Europe as a percentage of the global size of shadow banking system has strongly increased from 2005 to 2010, while the share of US located assets has decreased. On a global scale, the share of those assets held by European jurisdictions has increased from 10 to 13% for UK intermediaries, from 6 to 8% for NL intermediaries, from 4% to 5% for DE intermediaries and from 2% to 3% for ES intermediaries. FR and IT intermediaries maintained their previous shares in the global shadow banks assets of 6% and 2% respectively.