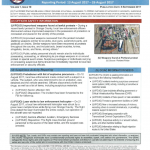 During a recent lawful protest in Orange County, local law enforcement officers discovered various improvised weapons in the possession of protesters or concealed and placed in the vicinity of the protest. 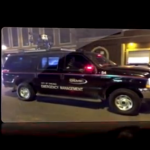 A bulletin issued in December 2014 by the Virgina Fusion Center (VFC) warned law enforcement and first responders that emergency vehicles could be targeted by violent protesters seeking to retaliate against the perceived surveillance of their activities. The bulletin, which is titled “Malicious Activists May Promote Harm to Emergency Management Vehicles Observed During Violent Protests,” draws its conclusion that “violent or malicious activity” could be directed toward emergency vehicles “operating near protest areas” based primarily upon comments to a post on Reddit and a protest guide posted anonymously on Pastebin.

DoJ Update to Policy Regarding Questioning, Arresting, or Charging Members of the News Media 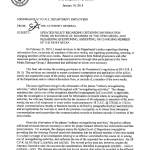 This final rule revises the existing provisions in the Department’s regulations at 28 C.F.R. § 50.10. The revisions are intended to ensure consistent interpretation and application of the policy; clarify and expand the scope of the policy; and ensure the highest level of oversight when members of the Department seek to obtain information from, or records of, a member of the news media. The most significant change is the elimination of the phrase “ordinary newsgathering activities,” which has been replaced throughout with “newsgathering activities.” The change mandates that, unless one of the exceptions identified in paragraphs (c)(3) or (d)(4) is applicable, when the investigative or prosecutorial need for information or records relates to newsgathering activities, the Attorney General must authorize the issuance of all subpoenas to members of the news media; the use of all subpoenas or court orders issued pursuant to 18 U.S.C. §§ 2703(d) or 3123 to obtain communications records or business records as defined by paragraphs (b)(3)(i) and (b)(3)(iii); and all applications for warrants to search the premises or property, or to obtain from third-party communication service providers the communications records or business records of members of the news media.

Attorney General Order on Policy Regarding Questioning, Arresting, or Charging Members of the News Media 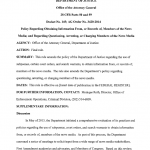 Our overriding conclusion can be stated briefly and explicitly. The pepper spraying incident that took place on November 18, 2011 should and could have been prevented. On November 18, 2011, University of California, Davis, police officers used pepper spray on students sitting in a line in the midst of a protest and “occupation” on the campus quad. Viral images of the incident triggered immediate and widespread condemnation of the police action. The UC Davis protest focused on and drew strength from widespread discontent among students about the increase in tuition and fees at the University of California. The incident also took place against the backdrop of worldwide student protests, including demonstrations by the Occupy Wall Street movement, which triggered similar events across the nation. These protests presented challenges for all affected universities and municipalities in attempting to balance the goals of respecting freedom of speech, maintaining the safety of both protesters and non-protesters, and protecting the legitimate interests of government and the non-protesting public.

The Standard Operating Procedures (SOP) outlined in this manual are to ensure that this department is prepared to respond effectively and efficiently in accordance with applicable law and District of Columbia policy to any unlawful conduct occurring in the context of First Amendment assemblies. These SOP’s incorporate revisions to the manner in which the Metropolitan Police Department responds to demonstrations and other assemblies on District of Columbia public space that the District has implemented in resolving litigation. This manual also reflects measures mandated by the First Amendment Rights and Police Standards Act of 2004.

An email contained in the latest AntiSec release indicates that law enforcement agencies in New York have been circulating an out-of-date manual that was previously criticized by the ACLU to instruct officers about issues related to Occupy protests. The brief email from December 5, 2011 was circulated to a number of law enforcement agencies affiliated with the Mid Hudson Chiefs of Police Association and contains several document attachments that describe tactics used by protesters, including basic guides on how to conduct your own “Occupy” protest. One of the documents is a police manual titled “Civil Disturbance and Criminal Tactics of Protest Extremists” that describes “illegal” tactics used by protesters and so-called “protest extremists”. The document, which was last revised in 2003, does not list its originating agency or author and is marked with a number of unusual protective markings indicating that it is not intended for public release.

As articulated in the United States Constitution, one of the freedoms guaranteed by the First Amendment is the right of persons and groups to assemble peacefully. Whether demonstrating, counterprotesting, or showing support for a cause, individuals and groups have the right to peacefully gather. Law enforcement, in turn, has the responsibility to ensure public safety while protecting the privacy and associated rights of individuals. To support agencies as they fulfill their public safety responsibilities, the Criminal Intelligence Coordinating Council (CICC) developed this paper to provide guidance and recommendations to law enforcement officers in understanding their role in First Amendment-protected events. This paper is divided into three areas, designed to provide in-depth guidance for law enforcement.