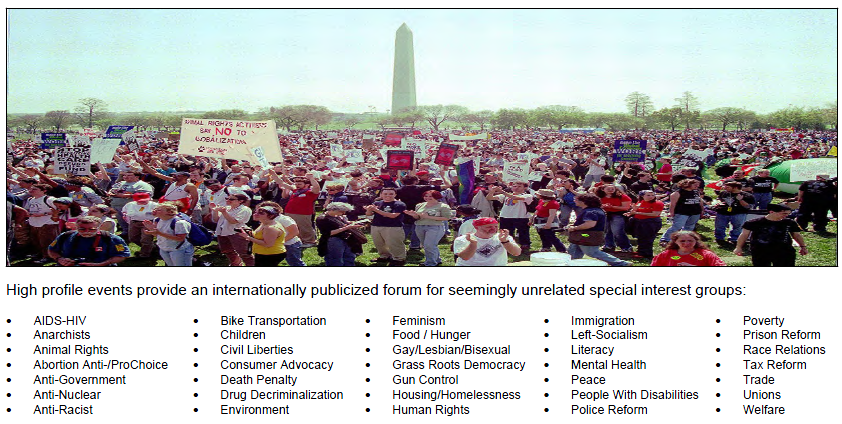 An image from the first page of a manual on criminal tactics of "protest extremists" shows a legal, First Amendment-protected event occurring on the National Mall. The guide then lists a number of issues and beliefs such as "environment" and "peace" which can provide an agenda for protest actions.

An email contained in the latest AntiSec release indicates that law enforcement agencies in New York have been circulating an out-of-date manual that was previously criticized by the ACLU to instruct officers about issues related to Occupy protests.  The brief email from December 5, 2011 was circulated to a number of law enforcement agencies affiliated with the Mid Hudson Chiefs of Police Association and contains several document attachments that describe tactics used by protesters, including basic guides on how to conduct your own “Occupy” protest.  One of the documents is a police manual titled “Civil Disturbance and Criminal Tactics of Protest Extremists” that describes “illegal” tactics used by protesters and so-called “protest extremists”.  The document, which was last revised in 2003, does not list its originating agency or author and is marked with a number of unusual protective markings indicating that it is not intended for public release.

The existence of the document was first discussed in a 2003 article from the Colorado Springs Independent which quoted a representative of the local FBI Joint Terrorism Task Force discussing the manual:

In a written statement recently obtained by the Colorado ACLU, an agent of the Denver Joint Terrorism Task Force describes how he has used the manual to instruct local law-enforcement officers.”Beginning in 2001, I began using a training manual created by the U.S. government, which identifies civil disturbance and criminal protest tactics and instructs on how to respond to those tactics,” states the agent, Tom Fisher. The manual, he states, is “part of a program offered by the United States government on criminal protest tactics.”

According to the statement, the training manual is “law-enforcement sensitive” and not to be released to the public.

Fisher also states that he has been teaching the Denver Police Department about “terrorist issues,” including “criminal tactics of protest extremists.”

The manual contained in the latest AntiSec release is further confirmed to be this document by a spokesman for the Colorado Springs Police Department who quotes from the document and refers to it by name:

A spokesman for the Colorado Springs Police Department said he’s not sure whether the department received the Oct. 15 FBI memo. “We have no record of receiving that intelligence bulletin, although that’s not to say we didn’t,” said the spokesman, Lt. Skip Arms.Springs police have not received training from Fisher, though they do use a manual titled Civil Disturbance and Criminal Tactics of Protest Extremists, Arms said.

“It’s something that our tactical people would look at and compare to their tactics,” he said.

Arms said he doesn’t know where the department obtained the manual or who authored it. The introduction states that it is “the result of an extensive interagency collaboration to address a surge of protest activity worldwide,” but nothing in it indicates specifically that it was developed by the U.S. government, he said.

Lt. Arms quotes from the introduction which states “‘Civil Disturbance and Criminal Tactics of Protest Extremists’, was prepared in response to the increase of protest activity worldwide and the escalation of violence and property destruction that has occurred in the past several years. Information regarding the unlawful operational and tactical activities was collected and interpreted by multiple agencies. The information presented is for law enforcement and public safety officials to assist in effectively managing civil disturbances and large-scale protests”.

Whether you are sympathetic to the complaints of Occupy protesters or not, the nationwide and now global movement to occupy civic spaces has had a much more tangible and immediate impact: demonstrating the increasing militaristic tactics of police around the country to suppress constitutionally-protected speech and dissent.  Though law enforcement is presented with a unique set of challenges in response to the Occupy protests, which include balancing reasonable protection of public safety while ensuring that citizens’ right to express themselves is honored, the tactics of law enforcement agencies around the country have helped to demonstrate the repressive nature of modern policing in the United States.

Throughout the country, predominantly peaceful gatherings in public spaces have been met with midnight raids conducted by black-clad phalanxes of often unidentifiable police, rousting them from their tents, tarps and other minimalistic structures to either arrest them or forcibly remove them from the space.  These raids have been coordinated at the national level, resulting in thousands of arrests that are sometimes without legal justification.  In many of these law enforcement actions, videos have later emerged showing police violating a number of core principles of policing First Amendment-protected events, including firing less-lethal munitions without provocation, indiscriminately beating protesters, storming protest encampments with live ammunition, ignoring or confiscating press credentials and arresting credentialed journalists.  Many of the actions taken by police are in violation of the Department of Justice guidelines for policing First Amendment-protected events and are often in contravention of the police department’s own internal policies.

According to the recently released Department of Justice guidelines for law enforcement responses to First Amendment-protected events, the role of law enforcement officers is to “ensure the safety of the general public” while protecting the “rights of persons practicing their First Amendment right to assemble peacefully.”  The manual states that police are not allowed to collect information on the event, its organizers or its beliefs without a clear “criminal predicate” necessitating a public safety response.  Though the boundaries of criminal behavior become murky when First Amendment-protected activities are involved, the guidelines make it clear that “membership or participation in a group or organization that has engaged in illegal activities in the past with respect to protests or demonstrations does not alone establish reasonable, articulable suspicion of criminal activity with respect to each of its members.”  Acts that are considered to be part of “symbolic speech” such as flag burning are considered to be protected under the First Amendment.  A New York judge’s November decision to uphold eviction of Occupy Wall Street protesters from Zuccotti Park mentioned that the protests were successful “largely because of the unorthodox tactic of occupying the subject public space on a 24-hour basis, and constructing an encampment there” admitting that the action of non-violently occupying a public space was, for the protesters, a form expression that would arguably be protected under the First Amendment.

The Department of Justice guidelines state that “persons or groups communicating with each other or members of the public in any form in pursuit of social or political causes” do not alone provide justification for police investigation.  The rights of individuals and groups under the First Amendment may only be limited when the event in question interferes with other people’s constitutional rights or creates a hazard for public health or safety.  However, even in cases where public health and safety is an issue, police are required to work with protesters to mitigate the risks to the public without suppressing their legitimate right to protest.  The 2003 guide to “Criminal Tactics of Protest Extremists” violates many of the rules set forth in the Department of Justice’s guidelines by repeatedly blurring the lines between criminal activity, such as property destruction, and lawful forms of protected speech, such as banner hanging.  The 2003 guide also discusses the ideological beliefs of protesters and how they provide an agenda for protest actions, something expressly prohibited by the Constitution and the Department of Justice guidelines. Basic descriptions of protester tactics in the 2003 guide, including communications patterns and organizing activities, are also in violation of Federal guidelines as they concern actions that are not only inherently lawful, but are legally protected under the First Amendment.