The following report was released by the University of California at Davis on April 11, 2012. 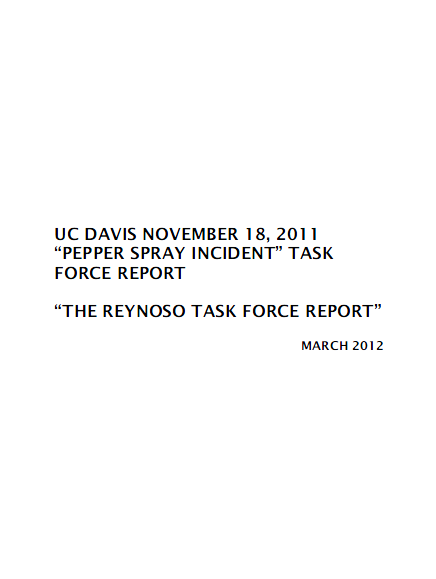 Our overriding conclusion can be stated briefly and explicitly. The pepper spraying incident that took place on November 18, 2011 should and could have been prevented.

On November 18, 2011, University of California, Davis, police officers used pepper spray on students sitting in a line in the midst of a protest and “occupation” on the campus quad. Viral images of the incident triggered immediate and widespread condemnation of the police action.

To assist the Task Force with fact finding and the identification of best practices in policing, the University engaged Kroll, Inc., an internationally known risk management firm. Kroll completed the final draft of its report on Feb. 22, 2012 (the “Kroll Report”). The Kroll Report describes at length the events leading up to this incident. In brief, at approximately 3:00 p.m. on Thursday, November 17, 2011, tents were erected on the Quad at the Davis campus. The Administration decided to remove the tents, instructing police to do so at 3:00 p.m. on Friday, November 18, 2011. While attempting to remove tents, the police arrested several individuals. Subsequently, in the midst of a growing group of people, the police officers employed pepper spray to remove several students linking arms in a line across a walkway in the Quad.

The UC Davis protest focused on and drew strength from widespread discontent among students about the increase in tuition and fees at the University of California. The incident also took place against the backdrop of worldwide student protests, including demonstrations by the Occupy Wall Street movement, which triggered similar events across the nation. These protests presented challenges for all affected universities and municipalities in attempting to balance the goals of respecting freedom of speech, maintaining the safety of both protesters and non-protesters, and protecting the legitimate interests of government and the non-protesting public.

In the immediate aftermath of the UC Davis incident, University of California President Mark G. Yudof announced the appointment of former California Supreme Court Justice Cruz Reynoso to chair a Task Force to address the pepper spraying of UC Davis students. This was a result of a request from Chancellor Katehi for an independent investigation to review the incident and report findings and recommendations to enable peaceful and nonviolent protests. All Task Force members are either currently or were once affiliated with UC Davis and most were nominated by relevant campus organizations.