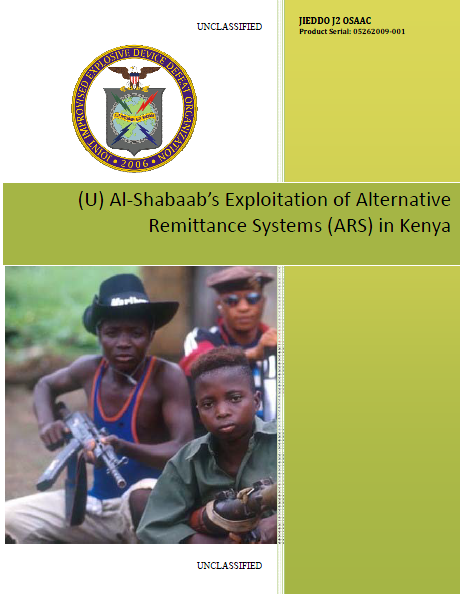 (U) Al-Shabaab, an al-Qaida ally, relies on a broad range of funding sources to support its terrorist and paramilitary operations in Somalia. However, little comprehensive information is available on the character and extent of this funding network within the large communities of Somali expats in Kenya. Existing reports suggest that alternative remittance systems (ARS), especially hawaladars, are a reliable source of income for Somalis still living in Somalia. Expat family members living in Kenya rely on these systems to transfer money to their relatives in Somalia. Recent reports suggest al-Shabaab is a beneficiary of these services1. Al-Shabaab could exploit current and future hawaladar networks in Kenya to transit funds to support IED operations against US or allied humanitarian or military operations. Thus, networks of undocumented and unmonitored hawaladars within the country could pose a threat to future counterterrorism or humanitarian operations in the region. Further study of the role of ARS in Kenya in the funding of al-Shabaab operations is recommended.

• (U) Kenya maintains the largest Somali expat and refugee community in the world, according to the 2005 United National High Commission on Refugees (UNHCR) Statistical Yearbook
• (U) Somali refugees and expats living in Kenya are a key source of cash funds for family members who remain in Somalia, exploiting Kenya’s mostly ungoverned informal financial markets
• (U) Al-Qaida is suspected of using Kenya’s ungoverned, informal ARS networks to deliver the funds needed to acquire the material and technology, and develop the training needed to manufacture improvised explosive devices (IEDs)
• (U) Al-Qaida could exploit emerging criminal networks, smuggling routes, and black market transit points in Kenya and surrounding countries to support future IED operations
• (U) More research is required to identify the possible effect of Kenyan ARS networks on al-Qaida IED operations in Somalia

(U) Various recent reports note Kenya’s increasing role in narcotics and human trafficking and regional organized crime. It points to an increasingly hospitable environment for terrorist financing and logistical support that could be used in current and future IED operations.

(U) In a March 2009 report on the global narcotics trade, the State Department notes that Kenya is “developing into a major money laundering country…” and key transit point in the narcotics trade in the region. The report also identifies Nairobi’s Eastleigh Estate as “an informal remittance hub for the Somali Diaspora, transmitting millions of dollars every day from Europe, Canada and the U.S. to points throughout Somalia.”

(U) Narcotics and human trafficking, black market networks and smuggling routes that transit Kenya could be exploited for current and future Al-Shabaab IED operations along with use of ungoverned hawaladar networks to provide key funding at the operational cell level. All of these elements represent unknown potential for current and future support of Al-Shabaab IED operations.

(U) A 2005 report noted that Somali ARS, commonly known as hawilda services, transfer money from Western expats through Jeddah and Dubai.8 The report also identifies a lack of reliable financial systems in Somalia and a cultural distrust of governmental systems in general as key causes for the common use of ARS in these populations.

(U) Kenya has the largest Somali expat and refugee community outside of Somali and is a suspected source of funding and logistical support for the al-Qaeda’s linked group al-Shabaab. The extent of that support, its scope and makeup are unknown. Available information sources are of mixed reliability, and often based on regional news reporting and hearsay. However, there are two general conclusions from existing open source media. First, Kenya’s networks of unregulated ARS services could be a reliable source of unregulated fund transfers to al-Shabaab and its cells. Second, emerging networks of criminal gangs, organized crime, narcotics and human trafficking create social instability and a regional criminal environment that al-Shabaab could exploit to support current and future IED operations.