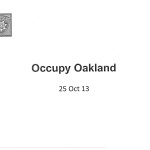 The following documents were obtained via a public records request made by members of Occupy Oakland. The documents concern the Oakland Police Department response to protests against the 2013 Urban Shield homeland security exercise held in Alameda County. Urban Shield is an annual exercise series that features nearly fifty different training scenarios for law enforcement ranging from terrorist attacks conducted by “homegrown extremists” to hostage situations, fires and even natural disasters. The 2013 Urban Shield exercise involved dozens of federal, state and local law enforcement organizations, representatives of foreign countries such as Switzerland, Brazil, Bahrain, Jordan, as well as more than a dozen corporations including FedEx, Cisco Systems and Verizon Wireless. The documents are heavily redacted and include an operations plan, a presentation on Occupy Oakland, arrest reports and other miscellaneous documentation related to the protests.

The City of Oakland and its police department support and protect the right of all individuals to engage in free speech and their right to assemble. However, this encampment is a violation of the law. You do not have permission to lodge overnight in Frank Ogawa Plaza. You must remove all tents, sleeping bags, tarps, cooking facilities and equipment and any other lodging material from the Plaza immediately. Your continued use of the Plaza for overnight lodging will subject you to arrest. Your activities are injurious to health, obstruct the free use of property, interfering with the comfortable enjoyment of the Plaza, and unlawfully obstruct the free passage or use of a public park or square. (California Penal Code sections 370 and 647(e) and Civil Code section 3479.) You must allow all persons, including Oakland Police officers and other emergency personnel, access to all areas of the Plaza at all times.

A letter published on the website of the Oakland Police Officers’ Association in response to public outrage over the violent police action that took police on October 25, 2011 attempting to suppress a march in support of the Occupy Oakland protest.

Oakland Police Suppress Protesters With the Same Technology as Dictators

Photos from Tuesday evening’s violent police response to a march supporting the Occupy Oakland protest encampment indicate that the Oakland Police Department is using the same crowd suppression technologies that are used by foreign dictators. One photo by Reuters photographer Stephen Lam shows a broken canister from a “Han-Ball” rubber ball smoke grenade. The non-lethal munition is made by Defense Technology Corporation of America (Federal Laboratories), a company based in Casper, Wyoming and owned by BAE Systems, one of the largest defense contractors in the world. The use of non-lethal munitions manufactured by this company has been reported in recent popular protests in Yemen and Bahrain. Several Palestinian protesters were injured in early 2011 and one was killed after being struck by tear gas grenades made by several U.S. companies, including Defense Technology Corporation of America.