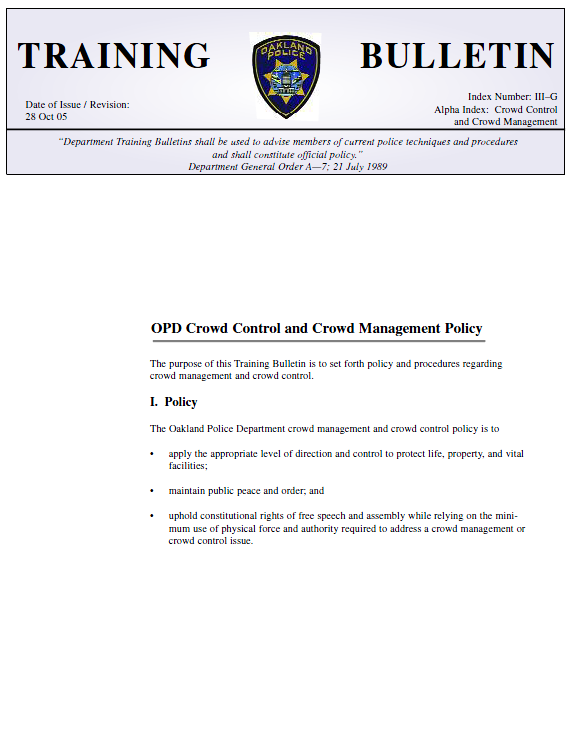 The purpose of this Training Bulletin is to set forth policy and procedures regarding crowd management and crowd control.

• apply the appropriate level of direction and control to protect life, property, and vital facilities;
• maintain public peace and order; and
• uphold constitutional rights of free speech and assembly while relying on the minimum use of physical force and authority required to address a crowd management or crowd control issue.

Crowd management is defined as techniques used to manage lawful public assemblies before, during, and after an event for the purpose of maintaining the event’s lawful status. Crowd management can be accomplished in part through coordination with event planners and group leaders, permit monitoring, and past event critiques.

Crowd control is defined as those techniques used to address unlawful public assemblies, including a display of formidable numbers of police officers, crowd containment, dispersal tactics, and arrest procedures.

First Amendment activities include all forms of speech and expressive conduct used to convey ideas and/or information, express grievances, or otherwise communicate with others and include both verbal and non-verbal expression.

Common First Amendment activities include, but are not limited to, speeches, demonstrations, vigils, picketing, distribution of literature, displaying banners or signs, use of puppets to convey a message, street theater, and other artistic forms of expression. All these activities involve the freedom of speech, association, and assembly and the right to petition the government, as guaranteed by the United States Constitution (First Amendment) and the California Constitution (Article 1, Sections 2 & 3).

All persons have the right to march, demonstrate, protest, rally, or perform other activities protected by the First Amendment of the United States Constitution and the California Constitution. The government may impose reasonable restrictions on the time, place, or manner of protected speech, provided the restrictions are justified without reference to the content of the regulated speech, that they are narrowly tailored to serve a significant governmental interest, and that they leave open ample alternative channels for communication of the information.

Demonstration is used generically in this Training Bulletin to include a wide range of First Amendment activities which require, or which may require, police traffic control, crowd management, crowd control, crowd dispersal, or enforcement actions in a crowd situation.

As used in this Training Bulletin, the term, demonstration, means a public display of a group’s or individual’s feeling(s) toward a person(s), idea, cause, etc and includes, but is not limited to, marches, protests, student walk-outs, assemblies, and sit-ins. Such events and activities usually attract a crowd of persons including participants, onlookers, observers, media, and other persons who may disagree with the point of view of the activity.

F. When an Unlawful Assembly May Be Declared

1. The definition of an unlawful assembly has been set forth in Penal Code Section 407 and interpreted by court decisions. The terms, “boisterous” and “tumultuous,” as written in Penal Code Section 407, have been interpreted as “conduct that poses a clear and present danger of imminent violence” or when the demonstration or crowd event is for the purpose of committing a criminal act.

The police may not disperse a demonstration or crowd event before demonstrators have acted illegally or before the demonstrators pose a clear and present danger of imminent violence.

2. The mere failure to obtain a permit, such as a parade permit or sound permit, is not a sufficient basis to declare an unlawful assembly. There must be criminal activity or a clear and present danger of imminent violence.

3. The fact that some of the demonstrators or organizing groups have engaged in violent or unlawful acts on prior occasions or demonstrations is not grounds for declaring an assembly unlawful.

4. Unless emergency or dangerous circumstances prevent negotiation, crowd dispersal techniques shall not be initiated until after attempts have been made through contacts with the police liaisons and demonstration or crowd event leaders to negotiate a resolution of the situation so that the unlawful activity will cease and the First Amendment activity can continue.

5. If after a crowd disperses pursuant to a declaration of unlawful assembly and subsequently participants assemble at a different geographic location where the participants are engaged in non-violent and lawful First Amendment activity, such an assembly cannot be dispersed unless it has been determined that it is an unlawful assembly and the required official declaration has been adequately given.

b. Chemical agents can produce serious injuries or even death. The elderly person or infant in the crowd or the individual with asthma or other breathing disorder may have a fatal reaction to chemical agents even when those chemical agents are used in accordance with the manufacturer’s recommendations and the Department’s training. Thus, crowd control chemical agents shall be used only if other techniques, such as encirclement and multiple simultaneous arrest or police formations, have failed or will not accomplish the policing goal as determined by the Incident Commander.

c. Members shall use the minimum amount of chemical agent necessary to obtain compliance.

d. Indirect delivery or crowd dispersal spray and/or discharge of a chemical agent shall not be used in demonstrations or other crowd events without the approval of a supervisor or command officer.

e. Chemical agents shall not be used for crowd control or dispersal without first giving audible warning of their imminent use and giving reasonable time to the crowd, media, and observers to disperse.

f. If chemical agents are contemplated in crowd situations, OPD shall have medical personnel on site prior to their use and shall make provision for decontamination and medical screening to those persons affected by the chemical agent(s).

a. Hand-thrown chemical agents or pyrotechnic gas dispersal devices shall not be used for crowd control or crowd dispersal without the approval of a supervisor or command officer.

b. The use of hand-thrown chemical agents or pyrotechnic gas dispersal devices may present a risk of permanent loss of hearing or serious bodily injury from shrapnel. Said devices shall be deployed to explode at a safe distance from the crowd to minimize the risk of personal injury and to move the crowd in the direction that will accomplish the policing objective.

c. Hand-thrown chemical agents or pyrotechnic gas dispersal devices shall not be used for crowd control without first giving audible warnings to the crowd and additional reasonable time to disperse.

d. Hand-thrown chemical agents or pyrotechnic gas dispersal devices shall be used only if other techniques such as encirclement and mass arrest or police formations have failed or will not accomplish the policing goal as determined by the Incident Commander.