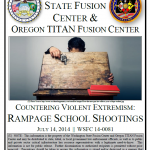 Over the past few years, there has been a definitive rise in school shooting incidents – specifically ‘Active Shooter’ or ‘Rampage Shooting’ events – but while the motives may have evolved, school violence is anything but new. With captive targets, a predictable attack environment, and little to no security hurdles, schools have long been a lucrative environment for violence. Recently though, the violent trend seems to be more popular amongst those with erroneous notions of vengeance, mental instability, and those seeking copycat infamy more than the staunch ideologist typically seen in other types of violent extremism. With that in mind, this joint Washington State Fusion Center (WSFC) and Oregon TITAN Fusion Center (TITAN) assessment intends to aid law enforcement and private and public sector security in understanding the various intricacies of the new-aged active or rampage shooter, how to recognize the signs, and what current measures are being taken to help mitigate the threat.

The Rapid Screening Point (RSP) Exercise is a component of the TOPOFF (“T4”) full-scale exercise (FSE) in the Oregon venue. An RSP is a temporary facility for high production screening of individuals with non-acute symptoms who are potentially ill or exposed to a harmful substance.” This Participant Guide contains excerpts from the Exercise Control Plan that are relevant to Responder Participants. It was drafted by James Spitzer, Emergency Preparedness Manager for the Multnomah County Health Department, in consultation with planners from other participating organizations.