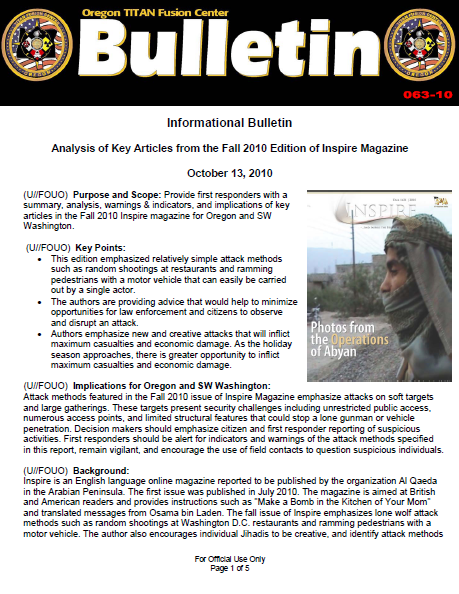 Attack methods featured in the Fall 2010 issue of Inspire Magazine emphasize attacks on soft targets and large gatherings. These targets present security challenges including unrestricted public access, numerous access points, and limited structural features that could stop a lone gunman or vehicle penetration. Decision makers should emphasize citizen and first responder reporting of suspicious activities. First responders should be alert for indicators and warnings of the attack methods specified in this report, remain vigilant, and encourage the use of field contacts to question suspicious individuals.

Inspire is an English language online magazine reported to be published by the organization Al Qaeda in the Arabian Peninsula. The first issue was published in July 2010. The magazine is aimed at British and American readers and provides instructions such as “Make a Bomb in the Kitchen of Your Mom” and translated messages from Osama bin Laden. The fall issue of Inspire emphasizes lone wolf attack methods such as random shootings at Washington D.C. restaurants and ramming pedestrians with a motor vehicle. The author also encourages individual Jihadis to be creative, and identify attack methods that are not predictable, and will lead to maximum casualties and economic damage. The fall edition is 74 pages and includes several feature articles and graphics. The three articles most relevant to planning and conducting attacks in the U.S. are summarized in this report.

Although there is a large amount of material on the internet regarding the above listed topics, the Jihadist must still function within the terrorist planning cycle. Online training eliminates the need for the Jihadist to travel overseas; however, the Jihadist must still:
1. Identify the target
2. Assemble information about the target (surveillance)
3. Acquire supplies
4. Build the device (if an IED attack)
5. Conduct attack rehearsal
Steps 1-5 of the planning cycle provide opportunities for State and Local officials to detect and report suspicious activity which could disrupt an attack planned using open source material from the internet.

(U//FOUO) Page 53 of Inspire Magazine Fall 2010: This section of Inspire provides readers with suggestions on how to individually wage jihad. The author suggests Jihadist conduct a suicide mission by using a 4 WD pickup truck to mow down pedestrians. The author specifically identifies the U.S. as a viable target for this attack method and writes that the general public is a valid target as long as the U.S. continues to target Muslim “non-combatants.”

The author suggests the following planning and attack cycle:
1. Acquisition of supplies: Modify the 4WD truck with steel blades or a sheet of steel at “torso level”; acquire a handgun; welding equipment *the author suggests holding off on welding just prior to the attack to eliminate opportunity for detection.
2. Identify Target/Gain Intelligence about the Target: Carefully choose the location and path of attack; narrow “spots” better *so that pedestrians can’t run for cover; avoid locations where vehicles may disrupt the attack; area that allows for maximum speed and control
3. Conduct actions on the Objective: “Mow down pedestrians”; use handgun to “finish” wounded pedestrians
4. Escape and Evasion: If vehicle is grounded, keep fighting until you achieve martyrdom

(U//FOUO) Indicators and Warnings:
*The presence of one or more of these indicators should raise the awareness level of first responders
1. Acquisition of welding or fabrication expertise and equipment
2. Acquisition of large number of knives or sheet metal for modifying vehicle
3. Elicitation of security personnel, first responders, or citizens for directions to or locations of mass gatherings.
4. Modifying front bumper of vehicle with knives or large piece of sheet metal
5. Driving vehicle with similar modification
6. Possession of maps, written plans, or information reflecting locations of mass gatherings
7. Statements expressing approval for or plans to conduct this type of attack.
8. Recording a martyrdom video
9. Strategically parking or standing vehicle in a strategic location to provide for acceleration prior to impacting a crowd or barrier.

“The Ultimate Mowing Machine”: This type of attack could be successfully conducted on almost any street. Based on the author’s advice, the Jihadist would most likely choose a location which would inflict the most amount of damage. Street fairs, public events, and pedestrians exiting venues such as the Rose Garden in Portland or theater events present an opportunity to kill more pedestrians than a random ramming attack on pedestrians in an intersection. Although historic ramming TTP has yielded low fatalities, the psychological impact of such an attack would be high. Target selection and planning for this type of attack could be conducted almost entirely online; however, there is an opportunity for disruption of the attack during the vehicle modification stage or detection while the subject is enroute to the attack. Large venues such as street fairs or events on the national mall could be protected by barriers however a heavy-duty vehicle could overcome chain link fencing. During the attack phase, first responders could disable the Jihadi’s vehicle by attempting to disable the Jihadi’s vehicle using their privately owned or government issued vehicle. First responders should use caution when approaching a potentially disabled vehicle, as the Jihadi may attempt to inflict further injuries using a handgun or other weapon such as an IED or incendiary device.

“Tips for our brothers in the United States of America” Mass Shootings: This section warns readers that police officers don’t care about their constitutional rights and may “trump up” charges in order to arrest Muslims. The author warns readers about the possibility of informants, electronic surveillance and suggested electronic security measures, risks of traveling overseas for training, risks of consorting with known Jihadist, having a cover story ready, emphasizing a well planned attack with 6 months to 1 year preparation as opposed to a “rushed job,” and encouraging followers to wage Jihad on U.S. soil. Suggested attack methods include a random active shooter operation similar to the Fort Hood shooting. The author specifically addresses “a random hit at a crowded restaurant in Washington DC at lunch hour” in order to kill government
employees and gain maximum media attention.

This type of attack has the potential to yield a high fatality count and could be successfully conducted on numerous restaurant, workplace, public area, or mass gathering in Oregon and SW Washington. This type of attack could be conducted with very few opportunities to observe and disrupt the attack prior to it being carried out. Active shooters may be calm and methodical such as Major Nidal Hassan, or they may show indicators similar to a suicide bomber, such as:

Security personnel should be told to observe people, when possible, as they exit their cars. This can be done by watching how they adjust clothing and how they approach the building, looking for signs that a person might be carrying a weapon, etc.