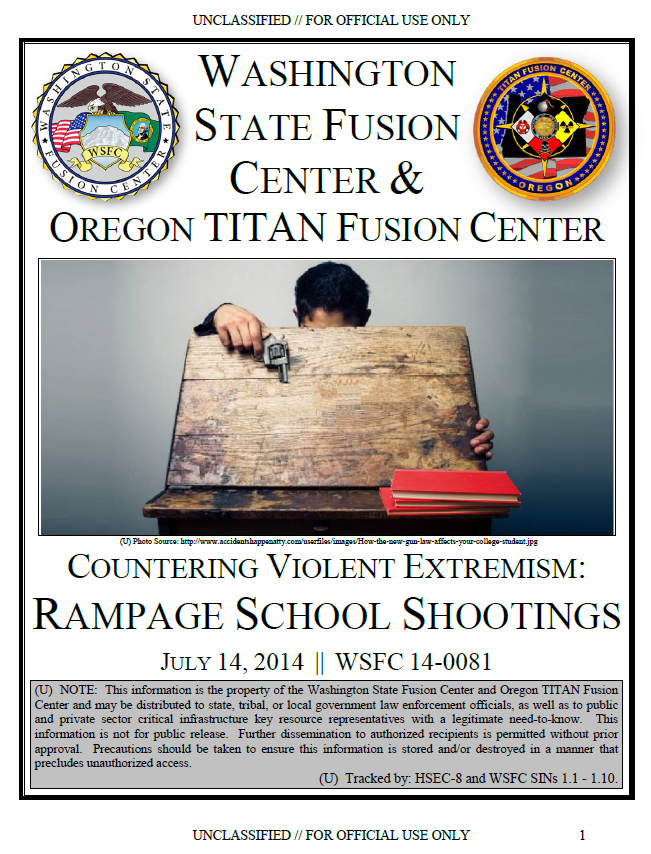 (U) Over the past few years, there has been a definitive rise in school shooting incidents – specifically ‘Active Shooter’ or ‘Rampage Shooting’ events – but while the motives may have evolved, school violence is anything but new. With captive targets, a predictable attack environment, and little to no security hurdles, schools have long been a lucrative environment for violence. Recently though, the violent trend seems to be more popular amongst those with erroneous notions of vengeance, mental instability, and those seeking copycat infamy more than the staunch ideologist typically seen in other types of violent extremism. With that in mind, this joint Washington State Fusion Center (WSFC) and Oregon TITAN Fusion Center (TITAN) assessment intends to aid law enforcement and private and public sector security in understanding the various intricacies of the new-aged active or rampage shooter, how to recognize the signs, and what current measures are being taken to help mitigate the threat.

− (U//FOUO) Rampage shootings at schools are not a new trend, but it is evolving and reoccurring. Statistics show the growth trend in active/rampage shooting events we have seen from 2005-2014 is very similar to what was suffered in the 1990’s.

− (U//FOUO) There is no profile for an active shooter. While some may share certain traits, each active/rampage shooter is vastly different in physical, mental, environmental, and motivational characteristics.

− (U//FOUO) Since there is no all-encompassing detection method, nor enough law enforcement to catch every would-be violent extremist, it is vital for the public to be active participants in deterring these tragedies by reporting suspicious activity and behavior.

(U) Traits of a Rampage Shooter

(U//FOUO) First and foremost, there is no profile for an active shooter. While some may share certain traits, each active shooter is different in physical, mental, environmental, and motivational characteristics. A joint DHS/FBI Intelligence Bulletin on ‘Active Shooter Incidents’, published in late December 2012, showed that active shooters were often described as “social isolates” who “harbored feelings of hate and anger” and had some history of mental health issues. Very few of the shooters in cases analyzed by the FBI had previous arrests for violent crimes, though many of the shooters had encountered a significant emotional hardship prior to the attack, such as “loss of significant relationships, changes in financial status, loss of a job, major adverse changes to life circumstances, and/or feelings of humiliation or rejection.”

(U//FOUO) While there is no cookie-cutter pattern for pre-event identification of active/rampage shooters, many fall into one or more of the following motive categories: mental instability, vengeance, or copycat killing. Each of these precursors has an inherent broad spectrum range, as not all people dealing with similar issues resort to violence. For example, perceived vengeance can be caused by issues such as an unstable or abusive home-life, sexual abuse, or being subject to bullying and alienation at school. Copycat killing occurs when the notion of popularity or infamy can be obtained through acts of violence, and is often coupled with mental instability. This also becomes increasingly prevalent after a pattern of shooting events occur, or a significant watershed event (i.e. Columbine, Virginia Tech, and Sandy Hook massacres). 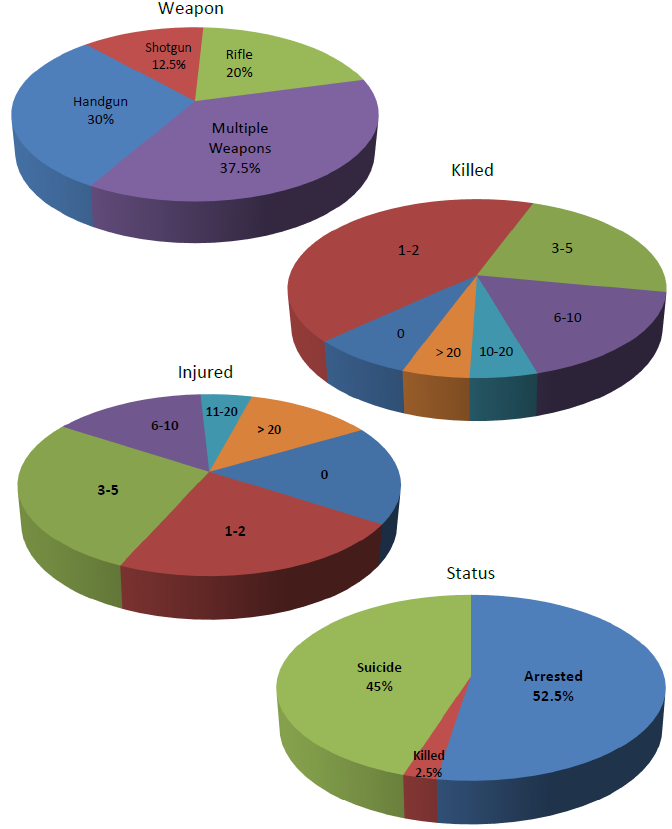 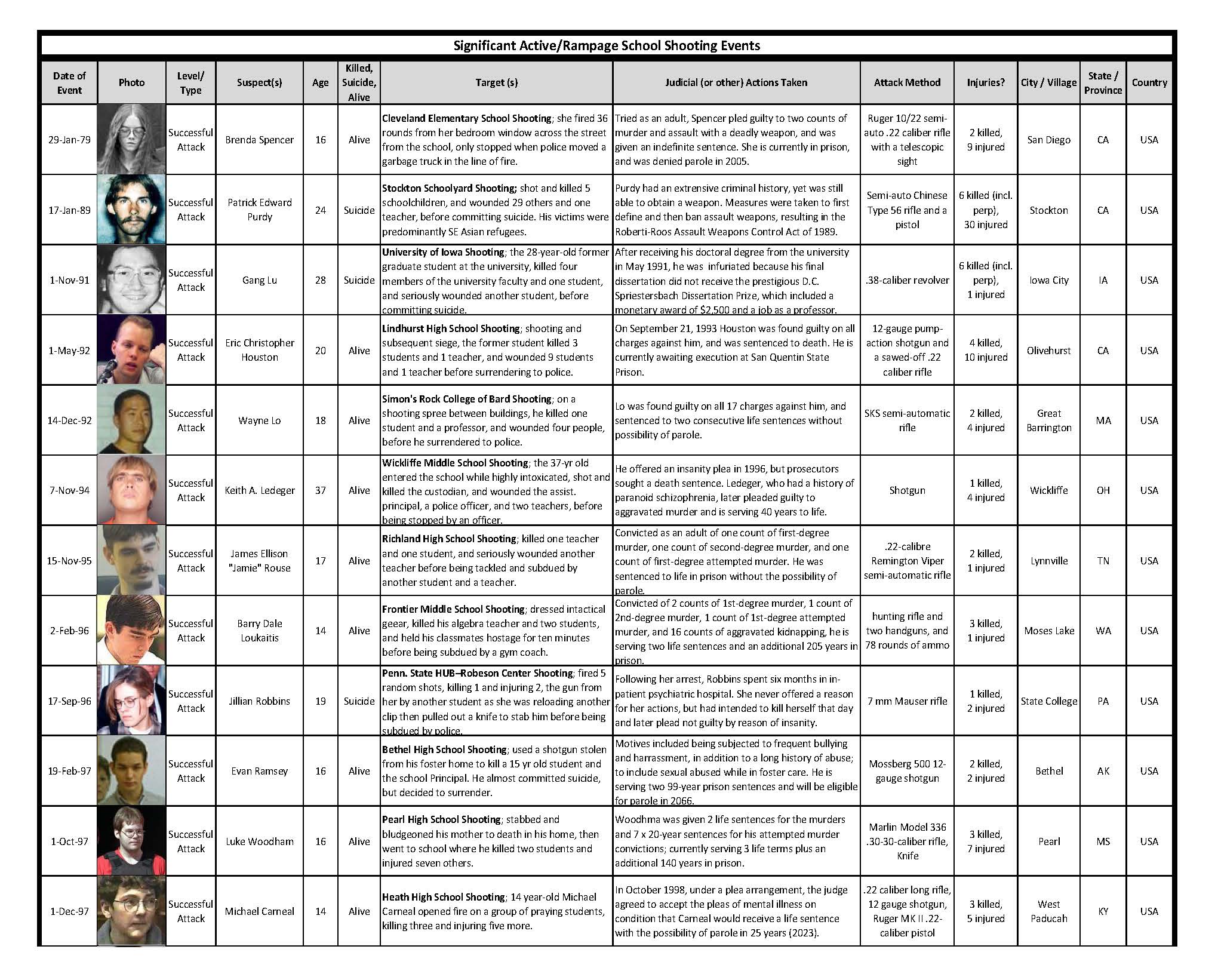 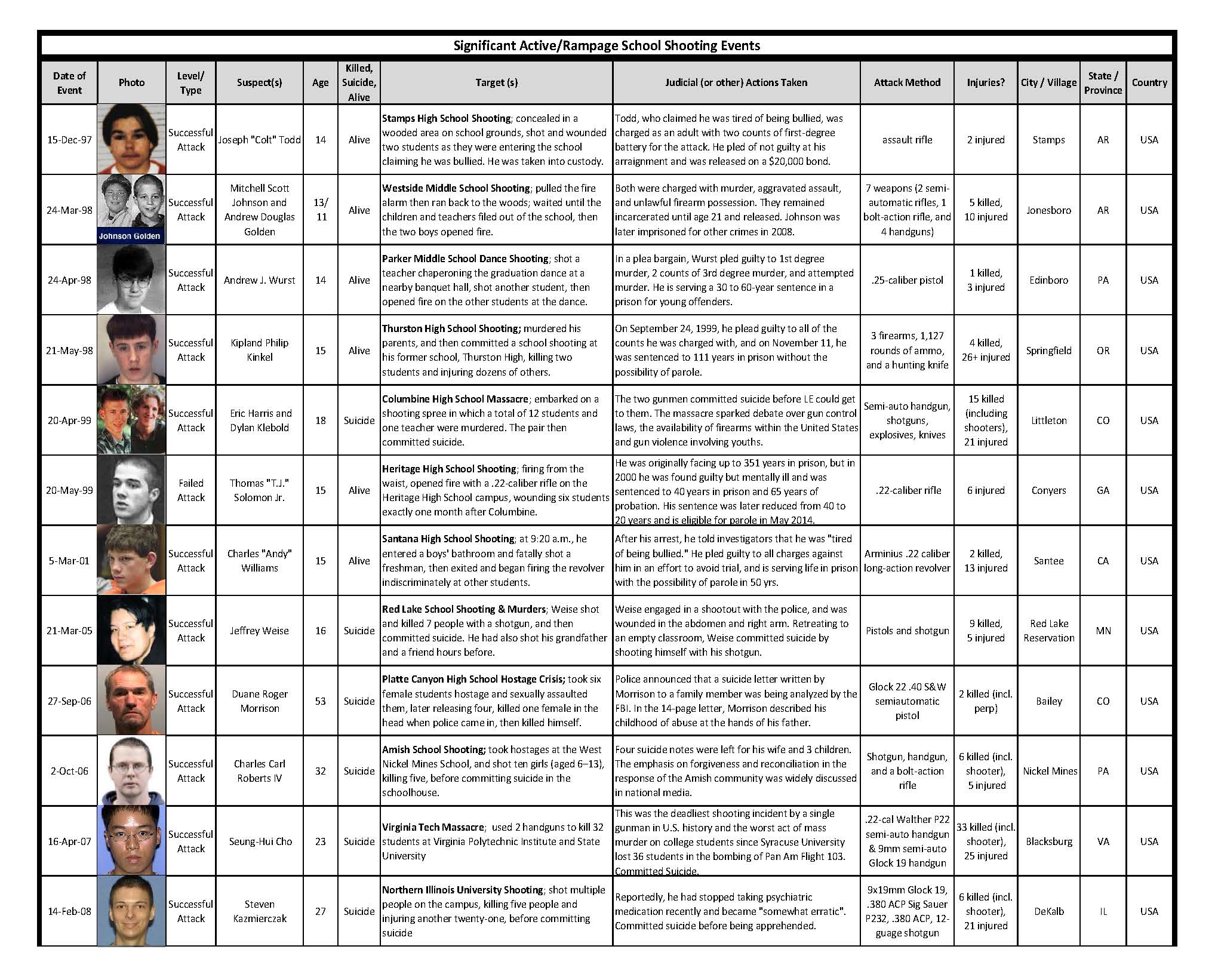 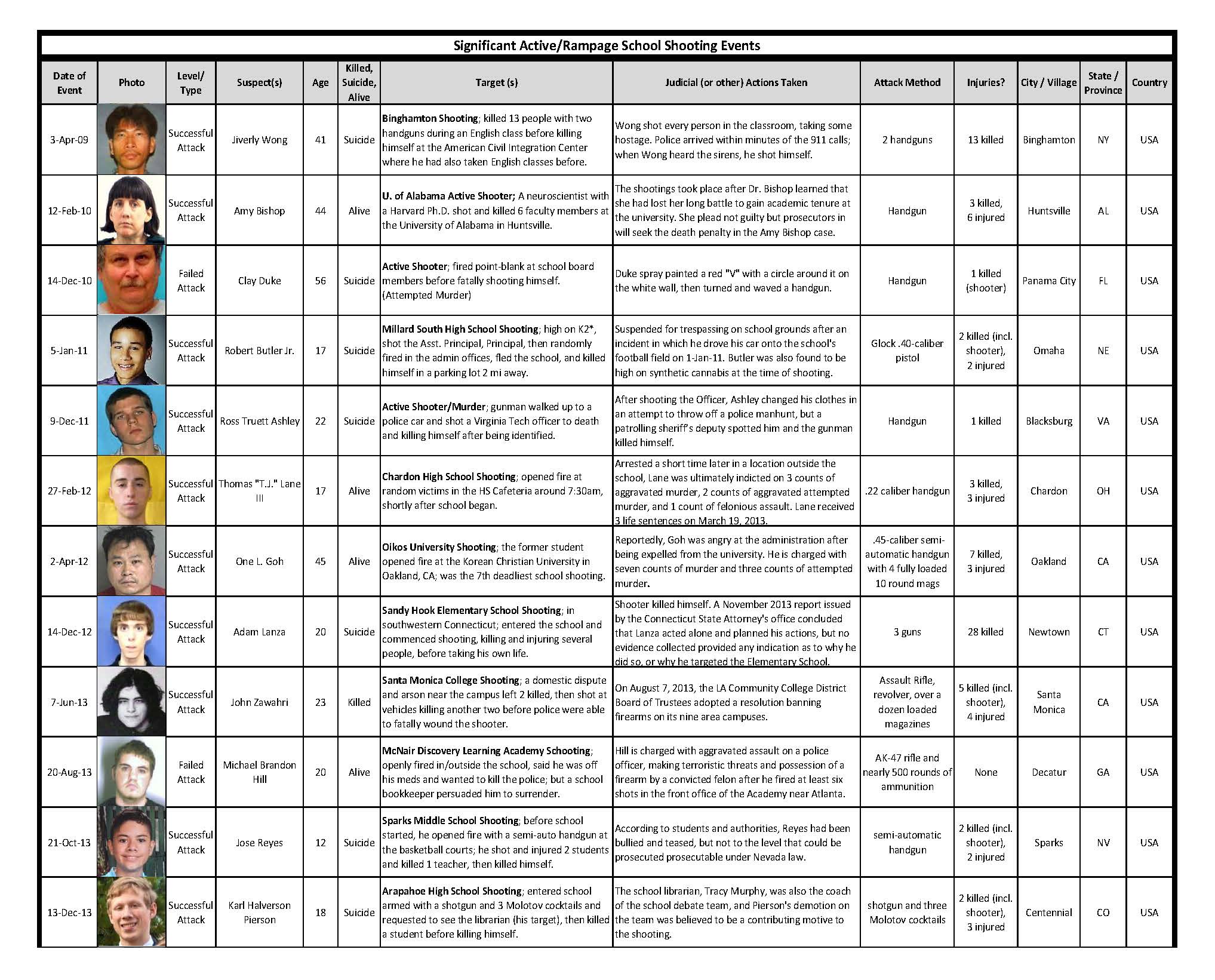 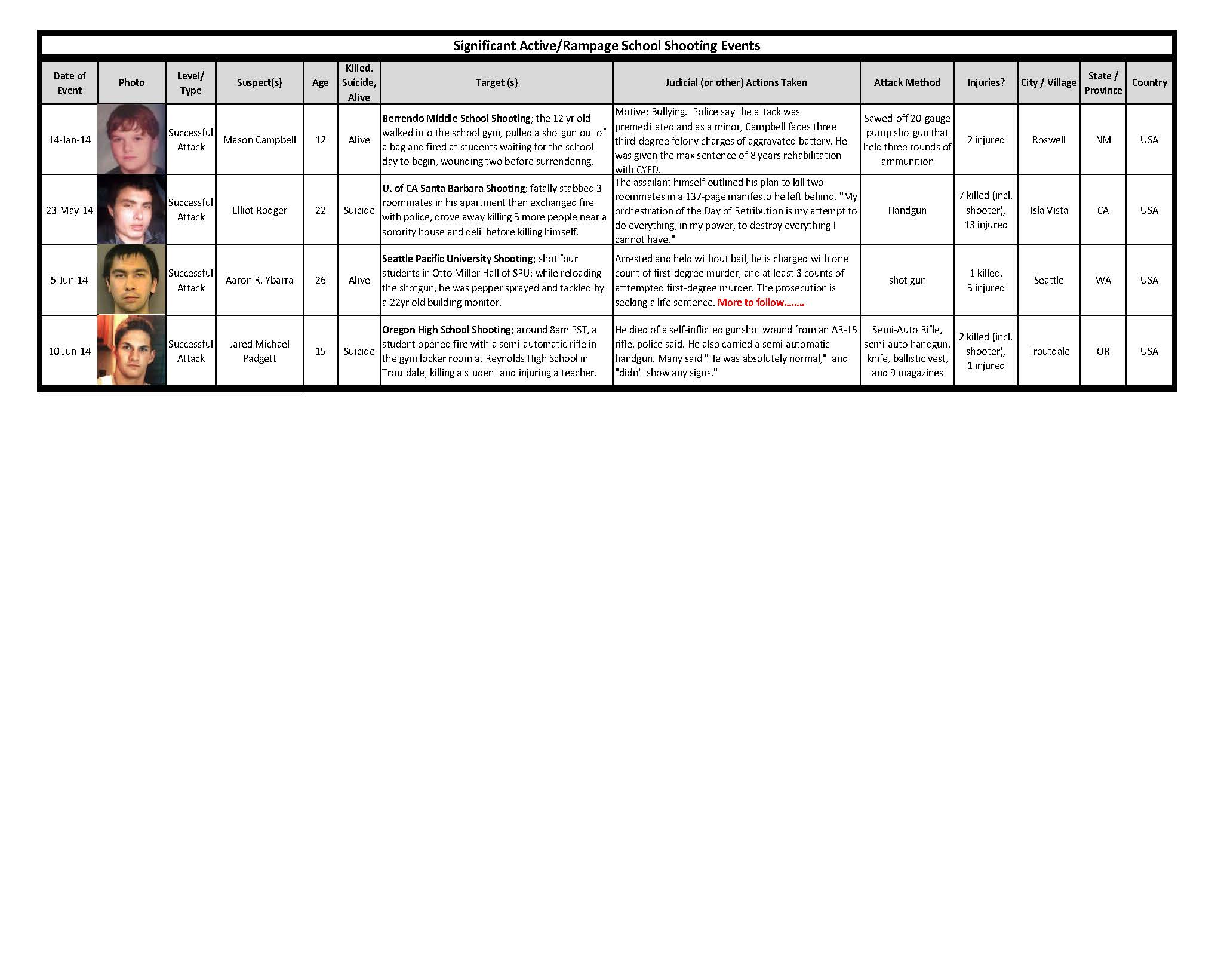