The following decision in the case of Assange v The Swedish Prosecution Authority was issued May 30, 2012 by the Supreme Court of the United Kingdom. 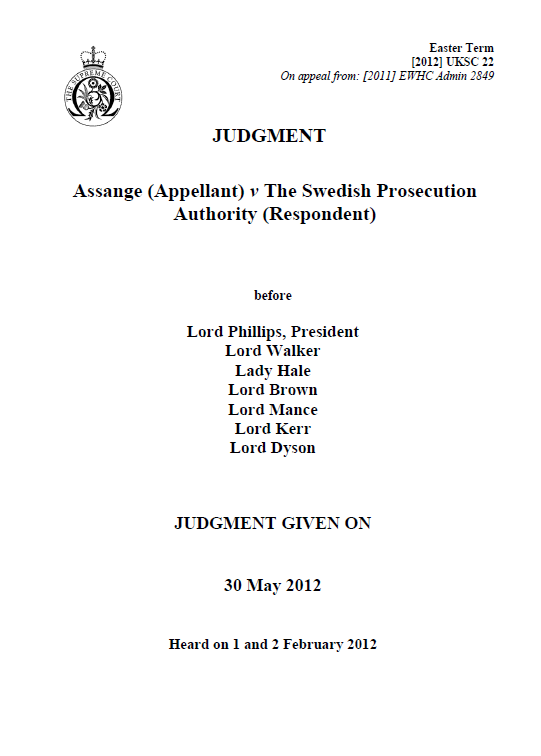 1. On 2 December 2010 the Swedish Prosecution Authority (“the Prosecutor”), who is the respondent to this appeal, issued a European Arrest Warrant (“EAW”) signed by Marianne Ny, a prosecutor, requesting the arrest and surrender of Mr Assange, the appellant. Mr Assange was, at the time, in England, as he still is. The offences of which he is accused and in respect of which his surrender is sought are alleged to have been committed in Stockholm against two women in August 2010. They include “sexual molestation” and, in one case, rape. At the extradition hearing before the Senior District Judge, and subsequently on appeal to the Divisional Court, he unsuccessfully challenged the validity of the EAW on a number of grounds. This appeal relates to only one of these. Section 2(2) in Part 1 of the Extradition Act 2003 (“the 2003 Act”) requires an EAW to be issued by a “judicial authority”. Mr Assange contends that the Prosecutor does not fall within the meaning of that phrase and that, accordingly, the EAW is invalid. This point of law is of general importance, for in the case of quite a number of Member States EAWs are issued by public prosecutors. Its resolution does not turn on the facts of Mr Assange’s case. I shall, accordingly, say no more about them at this stage, although I shall revert briefly to them towards the end of this judgment.

260. What if any admissible guidance does one gain from this parliamentary history? I have already concluded that the concept of “judicial authority” in the Framework Decision should be seen as having autonomous limits in European law. It would follow, on any view, that the concept in section 2(2) must also have objective limits, rather than depend for example upon the grant of a certificate by SOCA. But even if the Framework Decision were not to be understood in this sense, I regard the clear language of section 2(2) of the Act, read with the limited requirement of certification in section 2(7) and (8), as pointing towards an objective domestic conception of judicial authority in section 2(2). At the very least, the position under the Act would be ambiguous. If that is so, then consideration of the parliamentary history makes it inconceivable that the 2003 Act can or should be construed domestically as leaving it to each state to define what is a judicial authority. The only sensible interpretation of section 2(2) in its final form and in the light of the parliamentary history is that it constitutes a selfstanding independent requirement, which British courts have to be satisfied is met. It would be circular and undermine the parliamentary process and clear intention if all that it meant was that British courts had to be satisfied that the issuing authority had the function of issuing a European arrest warrant under its domestic law and that the relevant state had notified the issuing authority to the Council as having that function. That might have been the effect of clauses 2(2) and (7) to (9) before they were amended as a result of the proceedings on 9 June and 22 October 2003. It cannot have been their effect after such amendment, or the amendment would achieve nothing.

262. It is true that ministers also gave these assurances with the understanding that the implementation of the Framework Decision by the 2003 Act would not in this respect lead to any change by comparison with previous practice. But, even though it be the case that bodies and persons other than courts, judges or magistrates were involved in decisions by states to request extradition under the arrangements in place prior to the Framework Decision, this cannot, in my view, undermine the force of the assurances given in relation to the new and more radical procedures being introduced by the Extradition Act 2003, to the effect that the new Act would require the intervention of an issuing judicial authority in the sense of a court, judge or magistrate.

263. Third, I do not consider that the answer given to the second question can be diluted by reference to subsequent state practice. I accept the potential relevance of subsequent state practice to the interpretation of the Framework Decision (paras 242 and 244 above – and see Lord Phillips’s judgment, para 67, Lord Dyson’s judgment, paras 127 to 140 and 152 and Lord Walker’s judgment). But this cannot affect the guidance as to Parliament’s actual intention in 2003 which is to be gained from the course of the parliamentary debates and amendments in 2003. To treat Parliament as having intended that the words “issuing judicial authority” should bear whatever meaning subsequent state practice might attach to them, would undervalue the significance of the parliamentary process and the seriousness of the concerns expressed, the assurances delivered and the amendments made during that process.

264. Fourth, I consider that the force and quality of the assurances given must outweigh any conclusion as to what may or would be likely to be the European legal position, if that could or were to be established now with any certainty. The Bill was seen, rightly, as affecting liberty and freedom to reside or remain within the jurisdiction of persons who might very well be citizens of the United Kingdom, although Mr Assange is not. It was controversial, and ministers’ assurances as to the scope of the phrase “judicial authority” should control its meaning in circumstances where the power of the state is now sought to be deployed to extradite a person at the instance of a public prosecutor. The assurances were in that respect and should bind the executive interest, including that of the respondent which is seeking the assistance of the British state to extradite Mr Assange. Lord Brown takes a contrary view, because, in effect, there cannot be found in the parliamentary exchanges any ministerial statement that the assurances were only given so long as they complied with whatever was (or might prove to be) the European legal position. But that puts the cart before the horse. First, such clarity as now exists about the likely European position only really results from subsequent state practice. But secondly and more importantly, Lord Brown’s approach reads into clear parliamentary assurances about the meaning of the Act an unstated qualification that such assurances should not bind if the minister should prove mistaken (Lord Brown’s word) about the true scope of the Framework Decision. Both Parliament and the courts can and should, in my opinion, take ministers at their word as to the meaning of the Act they were promoting, and not question unqualified assurances which they have given.

265. Finally, if this means that there can now be seen to be a possible or likely discrepancy between the United Kingdom’s international obligations and the domestic legal system or between the meaning of the phrase “judicial authority” in the framework decision and in the Extradition Act 2003, that is in no way impossible: see per Lord Hoffmann in R v Lyons, cited in para 206 above. It is the consequence of the United Kingdom’s dualist system, of parliamentary sovereignty and of the clear limitations on the domestic implementation of European law which Parliament intended, for the time being, by the European Communities Act 1972 and the European Union (Amendment) Act 2008, read with Protocol No 36 of the Treaty of Lisbon. As a domestic court, and in the absence of any European Treaty or instrument falling within section 2 of the European Communities Act 1972, our loyalty must be to Parliament’s intention in enacting the Extradition Act 2003. The implications of this in the present context are in my view clear.

266. In the result, I conclude that, whatever may be the meaning of the Framework Decision as a matter of European law, the intention of Parliament and the effect of the Extradition Act 2003 was to restrict the recognition by British courts of incoming European arrest warrants to those issued by a judicial authority in the strict sense of a court, judge or magistrate. It would follow from my conclusions that the arrest warrant issued by the Swedish Prosecution Authority is incapable of recognition in the United Kingdom under section 2(2) of the 2003 Act. Parliament could change the law in this respect and provide for wider recognition if it wished, but that would of course be for it to debate and decide. I would therefore allow this appeal, and set aside the order for Mr Assange’s extradition to Sweden.