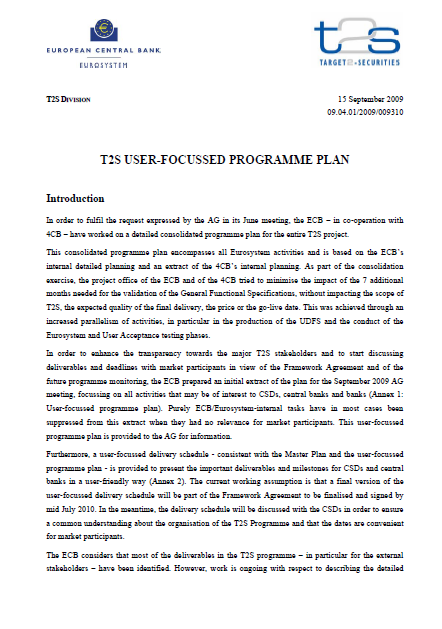 In order to fulfil the request expressed by the AG in its June meeting, the ECB – in co-operation with 4CB – have worked on a detailed consolidated programme plan for the entire T2S project.

This consolidated programme plan encompasses all Eurosystem activities and is based on the ECB’s internal detailed planning and an extract of the 4CB’s internal planning. As part of the consolidation exercise, the project office of the ECB and of the 4CB tried to minimise the impact of the 7 additional months needed for the validation of the General Functional Specifications, without impacting the scope of T2S, the expected quality of the final delivery, the price or the go-live date. This was achieved through an increased parallelism of activities, in particular in the production of the UDFS and the conduct of the Eurosystem and User Acceptance testing phases.

In order to enhance the transparency towards the major T2S stakeholders and to start discussing deliverables and deadlines with market participants in view of the Framework Agreement and of the future programme monitoring, the ECB prepared an initial extract of the plan for the September 2009 AG meeting, focussing on all activities that may be of interest to CSDs, central banks and banks (Annex 1: User-focussed programme plan). Purely ECB/Eurosystem-internal tasks have in most cases been suppressed from this extract when they had no relevance for market participants. This user-focussed programme plan is provided to the AG for information.

Programme and that the dates are convenient for market participants.

The ECB considers that most of the deliverables in the T2S programme – in particular for the external stakeholders – have been identified. However, work is ongoing with respect to describing the detailed content of each of the deliverables. New deliverables may also appear during the discussions with market participants.

1. Assumptions for the user-focussed programme plan

The consolidated programme plan – and hence the user-focussed plan – is based on the assumption that the migration will be done by CSD (or group of CSDs) during three migration windows, and that only the testing for the 1st migration group needs to be completed before its migration. The Subgroup on Testing and Migration (SGTM) assessed also other migration options as requested in the last AG meeting. In case the AG agrees on another migration approach, then some of the tasks and their timing in the plan (for example “criteria for establishing migration groups, composition of migration groups”), in particular related to testing and migration, may require changes.

Some aspects are not yet fully planned, as they usually depend on strategic decisions to be taken soon (e.g. pricing, telecommunication issues). It is anticipated that full clarity is given by end 2009 on all the un-planned aspects.

Although much work has already been done, further work remains in order to stabilise the internal programme plan and to identify further task dependencies and possible buffers between tasks on the critical path. Until now, the critical path, both on the side of the ECB’s planning and on the side of the 4CB’s internal planning could not yet be precisely calculated. However, at this stage, the critical paths seem to be the following:
• Go-live → User Testing → Eurosystem acceptance testing → 4CB internal testing → development → Specifications
• Infrastructure → Delivery of the different environments → logical design → General Technical Design
• Activities related to the pre-production security assessment
Work will also continue to finalise the determination of the critical path by end-2009.