This report was originally published by the Federation of American Scientists. We have compiled a handy PDF version of the report based on FAS’ version to make it easier for researchers to view the complete report.  The story of the Bank of Credit and Commerce International is extremely important to understanding the relationships between Pakistan, terrorist financing and the CIA.  A complete HTML version (2.6 MB) of this report is also available. 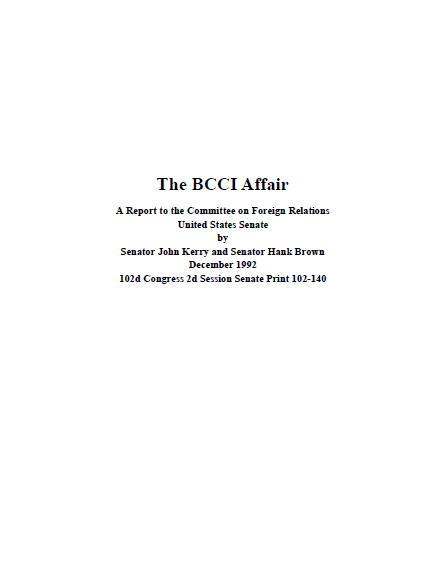 The BCCI Affair: A Report to the Committee on Foreign Relations United States Senate

BCCI, THE CIA AND FOREIGN INTELLIGENCE

The relationships involving BCCI, the CIA, and members of the United States and foreign intelligence communities have been among the most perplexing aspects of understanding the rise and fall of BCCI. The CIA’s and BCCI’s mutual environments of secrecy have been one obvious obstacle. For many months, the CIA resisted  providing information to the Subcommittee about its involvement with and knowledge of BCCI. Moreover, key players who might explain these relationships are unavailable. Some, including former CIA director William Casey, and BCCI customers and Iranian arms dealers Ben Banerjee and Cyrus Hashemi, are dead. Others, including most of BCCI’s key insiders, remain held incommunicado in Abu Dhabi. While promising in public hearings to provide full cooperation to the Subcommittee, to date the Abu Dhabi government has refused to make any BCCI officers available for interview by the
Subcommittee. Former BCCI chairman Agha Hasan Abedi remains severely incapacitated due to
a heart attack. Finally, some persons in a position to know portions of the truth have denied
having any memory of events in which they participated and of documents which they reviewed.
A baseline for assessing the BCCI-CIA story is the CIA’s official record of its use of BCCI and
its targeting of the bank, as set forth in several hundred CIA records created from 1982 through
1992. That record was, by and large, accurately represented by CIA acting director Richard Kerr
in public testimony on October 25, 1991, supplemented by more detailed, classified testimony on
October 31, 1991. Unfortunately, that record also contains ostensible gaps in knowledge on the
part of the CIA about the activities of key contacts in the Middle East for U.S. intelligence —
including BCCI shareholders Kamal Adham and Abdul Raouf Khalil, and BCCI customer and
Iran/Contra arms merchant Adnan Khashoggi — which strain belief.

Outside the documentary record provided to the Subcommittee by the CIA, there is additional
material, consisting of BCCI documents, testimony from BCCI officials and insiders, and
extrinsic, circumstantial and historic information describing other substantial contacts between
BCCI and the intelligence community. These include contacts between BCCI and:

CIA officials have told the Subcommittee that the CIA as an institution has rules requiring the
creation of written records on every activity engaged in by the Agency, and on all significant
information reported to the Agency. In the summer of 1991, the CIA engaged in what its officials
described as a “dumb” or “brute force” review of its documents, essentially reviewing all
possible files for information on BCCI, rather than relying on knowledgeable individuals to
select such information. The review located a substantial amount of material generated by the
CIA throughout the 1980’s, which was produced in July and August, 1991 for CIA internal
reviews, in September and October for the Congressional intelligence oversight committees, and
beginning in March, 1992, to the Subcommittee.

Unfortunately, there remains a wide disparity between the CIA’s official account of critical
relationships between BCCI and persons associated with the CIA, and the information available
from other sources, including BCCI’s own records. One is left with the choice of accepting the
official record, which requires an assessment that the other contacts between BCCI and U.S.
intelligence figures and operations are coincidental, or of assuming that the full story of BCCI’s
relationship to the United States has been intentionally veiled by critical players on both sides of
that relationship.

Beginning in the fall of 1986, and continuing through early 1989, BCCI initiated a series of
contacts with perhaps the most politically prominent international and business consulting firm
in the United States — Kissinger Associates.

Ultimately both Stoga and a retired Brazilian Ambassador working as a consultant to Kissinger
Associates, Sergio Correa da Costa, seriously explored finding ways to link BCCI’s global
network of banks with the services being offered by Kissinger Associates. Discussions between
representatives of BCCI and representatives of Kissinger Associates took place over an 18 month
period concerning the possibility of merging the capabilities of BCCI and Kissinger Associates
on various, mostly unspecified, projects. Following BCCI’s indictment, discussions continued as
to whether Kissinger Associates could help BCCI respond to the ramifications of that indictment.
These discussions ended in early 1989 at Henry Kissinger’s personal insistence.
During the discussions, Stoga provided advice to BCCI on a possible public relations campaign.
At their conclusion, Kissinger Associates referred BCCI to one its own directors, former
Assistant Secretary of State William Rogers, and his firm, Arnold & Porter, who already
represented Kissinger Associates on its own legal work. Rogers and Arnold & Porter in turn
agreed to provide BCCI with legal services arising out of its indictment, although few services
were provided as a consequence of the opposition of Clark Clifford and Robert Altman to the
firm’s involvement.

Although discussions concerning a broader relationship were cut short by the indictment, the
BCCI-Kissinger Associates correspondence reveals much about BCCI’s approach to seeking
political influence in the United States. The correspondence also highlights BCCI’s focus on
doing business with, and ability, given its $23 billion in reported assets and 73 countries of
operation, to attract interest from, some of the most politically well-connected people in the
United States.

On July 5, 1991, when BCCI was closed, some one million small depositors in BCCI around the
world lost their deposits.

In addition to these small depositors, there were other, larger depositors. Among those depositors
were central banks, governmental organizations, government investment funds, and government
officials, involving most of the countries in the world.

There is no way of knowing even now precisely who were among all those who lost money.
BCCI made frequent use of “managers’ ledgers” or numbered accounts for its most sensitive
depositors, whose identities were typically kept secret from everyone other than their personal
banker at BCCI. Given the anonymity, the secrecy, and the source of the income behind many of
these deposits, some depositors, including governmental officials or agencies, have not
necessarily been in a position to assert claims to the money they have lost.

However, some sense of the impact on governmental entities and global officialdom is provided
by an account appearing in the French wire service Agence France Presse a few days after
BCCI’s global shut-down, concerning BCCI losses at its tiny branch in Korea, entitled “Angry
Diplomats Urge Government To Release Their BCCI Assets”:

A major row is erupting between the South Korean government and foreign diplomats whose
deposits have been frozen by the suspension of the Seoul branch of the scandal-hit Bank of
Credit and Commerce International (BCCI). Incensed diplomats from 33 countries met last
Thursday at a European embassy here to coordinate strategy after a protest they filed with the
central bank of Korea went unheeded, diplomats said. The diplomats said that 120 of their
colleagues from 33 embassies have had part or all of their deposits frozen. In addition, the
accounts of several embassies have been frozen, forcing some to cut back operations. . . The
local branch of BCCI had strongly lobbied diplomats here to use the bank, offering interest rates
slightly above average and putting a wide international network at their disposal, officials said. . .
. The envoys said that among those countries [in Korea alone] whose embassies were in partial
or deep trouble were [a number of] Latin American countries, Bangladesh, Belgium, Iran, Italy,
Hungary, Liberia, Libya, Pakistan, the Philippines, Saudi Arabia, Spain, Switzerland, Thailand,
Turkey, the United Arab Emirates and Yugoslavia . . . Peru and Argentina have suspended
consular operations [entirely] because of lack of funds.