The Role of the Department of Defense During A Flu Pandemic 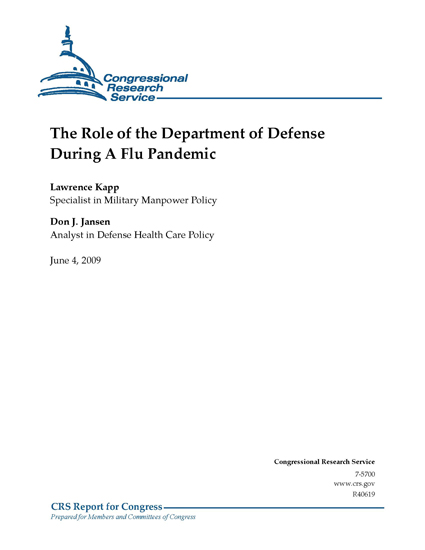 A flu pandemic is a worldwide epidemic of an influenza virus. As such, the United States’ response to a flu pandemic would have both international and domestic components. Additionally, the domestic response effort would include contributions from every governmental level (local, state, tribal, and federal), non-governmental organizations, and the private sector. This report will focus largely on the role of the Department of Defense (DOD) in supporting the nation’s domestic response effort, although it will also touch on DOD’s international role.

The Department of State would lead the federal government’s international response efforts, while the Department of Homeland Security and the Department of Health and Human Services would lead the federal government’s domestic response. The Department of Defense would likely be called upon to support both the international and domestic efforts. An analysis of the tasks assigned by the National Strategy for Pandemic Influenza Implementation Plan indicates that DOD’s role during a flu pandemic would center on the following objectives: assisting in disease surveillance; assisting partner nations, particularly through military-to-military assistance; protecting and treating US forces and dependents; and providing support to civil authorities in the United States.

With respect to providing support to civil authorities in the United States, the types of defense support which would likely be in greatest demand during a flu pandemic include: providing disease surveillance and laboratory diagnostics; transporting response teams, vaccines, medical equipment, supplies, diagnostic devices, pharmaceuticals and blood products; treating patients; evacuating the ill and injured; processing and tracking patients; providing base and installation support to federal, state, local, and tribal agencies; controlling movement into and out of areas, or across borders, with affected populations; supporting law enforcement; supporting quarantine enforcement; restoring damaged public utilities; and providing mortuary services. Note, however, that DOD’s ability to support these requests would be limited by its national defense and force protection responsibilities. The two principal ways in which defense support could be provided to civil authorities are by way of an “immediate response,” or in response to a formal “request for assistance” (RFA). Additionally, in extreme circumstances the federal government may expedite or suspend the RFA process and initiate a “proactive federal response.” National Guard personnel would almost certainly be involved in domestic response efforts as members of their state militia under the control of their governor. Current DOD plans do not anticipate federal mobilization of the National Guard or Reserves to respond to a flu pandemic. However, these plans could be modified if circumstances warranted it (for example, if the severity of the pandemic significantly exceeded DOD’s planning assumptions). In the event such a federal mobilization is contemplated, an important consideration would be the impact it would have on any response efforts that were already occurring at the state and local levels. For example, the activation of Reserve and National Guard medical personnel may pull them out of local hospitals where they are already engaged in the response effort, thereby undermining state and local response efforts.

The federal response to a flu pandemic would be broadly shaped by statute and executive branch plans and policies. Statutes such as the Robert T. Stafford Disaster Relief and Emergency Assistance Act (the Stafford Act), the Public Health Service Act, and other public health emergency authorities permit the federal government to provide various forms of assistance to eligible applicants, including state and local governments, non-profit organizations and individuals. While these statutes authorize the federal government to provide assistance, the manner in which the array of federal agencies provide that assistance in coordination with other levels of government, non-governmental organizations, and the private sector is guided by an executive branch planning document known as the National Response Framework (NRF).

The NRF “is a guide to how the Nation conducts all-hazards response.” Among other things, it establishes broad lines of authority for federal government agencies to prepare for and respond to any terrorist attack, major disaster, or other emergency (i.e., “all-hazards”). Under the NRF, the Secretary of State is responsible for “managing international preparedness, response and recovery activities relating to domestic incidents and the protection of U.S. citizens and U.S. interests overseas.” The Secretary of Homeland Security is “the principal Federal official for domestic incident management…[and is] responsible for coordination of Federal resources utilized in the prevention of, preparation for, response to, and recovery from terrorist attacks, major disasters, and other emergencies.”6 However, the Secretary of Health and Human Services (HHS) “leads all Federal public health and medical response to public health emergencies and incidents covered by the NRF.”7 Given the centrality of public health and medical response during a flu pandemic, HHS would be the primary response agency for the domestic response, even while DHS coordinates the overall domestic response effort.

The role of the Department of Defense (DoD) in supporting domestic response efforts under the NRF is potentially significant, while recognizing certain limits due to the Department’s principal mission of national defense:

The primary mission of the Department of Defense (DOD) and its components is national defense. Because of this critical role, resources are committed after approval by the Secretary of Defense or at the direction of the President. Many DOD components and agencies are authorized to respond to save lives, protect property and the environment, and mitigate human suffering under imminently serious conditions, as well as to provide support under their separate established authorities, as appropriate. The provision of defense support is evaluated by its legality, lethality, risk, cost, appropriateness, and impact on readiness. When Federal military and civilian personnel and resources are authorized to support civil authorities, command of those forces will remain with the Secretary of Defense. DOD elements in the incident area of operations and National Guard forces under the command of a Governor will coordinate closely with response organizations at all levels.

A more thorough discussion of the types of support DoD might be called upon to provide to civil authorities, and the process whereby such support can be requested, occurs later in this report.

During a serious flu pandemic, there is a strong possibility that local, state, and federal responders will request assistance from the Department of Defense. DoD has a broad range of capabilities that could be useful to civil authorities in emergency situations, including transportation assets, medical personnel and supplies, security forces, and communications equipment The NRF and the Implementation Plan refer to this type of assistance as Defense Support of Civil Authorities (DSCA), while DoD often refers to it as Civil Support (CS) or Military Assistance to Civil Authorities (MACA). This report will follow the NRF terminology unless otherwise specified.

The types of defense support which would likely be in greatest demand during a flu pandemic are contained in the Implementation Plan and the NRF’s Emergency Support Function (ESF) # 8, Public Health and Medical Response Annex .28 A review of these documents indicates an anticipated demand for the types of support from DOD listed below. Note, however, that DOD’s ability to support these requests would be limited by its national defense and force protection responsibilities.