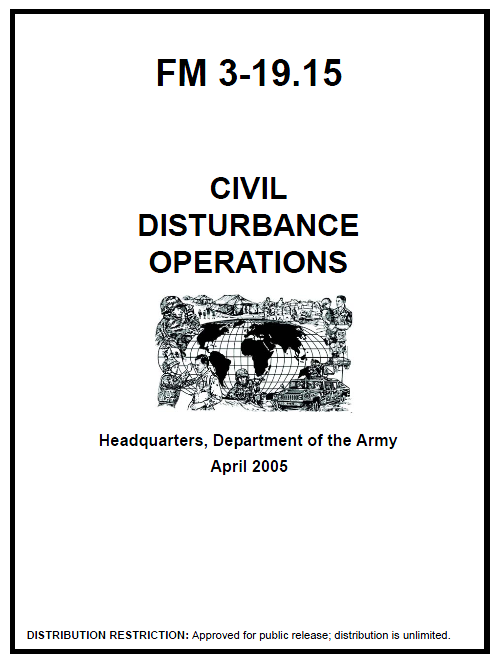 Department of the Army

Field Manual (FM) 3-19.15 addresses continental United States (CONUS) and outside continental United States (OCONUS) civil disturbance operations. Today, United States (US) forces are deployed on peacekeeping, peace enforcement, and humanitarian assistance operations worldwide. During these operations, US forces are often faced with unruly and violent crowds intent on disrupting peace and the ability of US forces to maintain peace. Worldwide instability coupled with increasing US military participation in peacekeeping and related operations requires that US forces have access to the most current doctrine and tactics, techniques, and procedures (TTP) necessary to quell riots and restore public order.

In the past, commanders were limited to the type of force they could apply to quell a riot. Riot batons, riot control agents, or lethal force were often used. Today, there is a wide array of nonlethal weapons (NLW) available to the commander that extends his use of force along the force continuum. This manual addresses the use of nonlethal (NL) and lethal forces when quelling a riot.

1-1. In these modern times, demonstrations, civil unrest, public disorder, and riots happen for a number of reasons. Some of these reasons are economic hardships, social injustices, ethnic differences (leading to  oppression), objections to world organizations or certain governments, political grievances, and terrorist acts. An event can be triggered by a single cause or a combination of causes. For example, operations in the Balkans involving civil unrest and riots were the result of ethnic hatred, a lack of civil authority, food shortages, a revolution, and religious-based fighting factions.

1-2. Demonstrations may range from simple, nonviolent protests that address specific issues, to events that turn into full-scale riots. Gatherings in protest are recognized rights of any person or group, regardless of where US forces may be operating. This fundamental right is protected under the Constitution of the US. During peacekeeping or peace enforcement operations, US forces should never violate basic civil or human rights. Most protesters are law-abiding citizens who intend that their protests be nonviolent, but some protest planners insist that the event involve some kind of violence. Often, in the media, protesters can gain sympathy for their cause by prompting authorities to take physical action against them. Violence is often the result of demonstrators beginning to conduct unlawful or criminal acts and authorities (who are responsible for the safety and welfare of all) enforcing the laws of the municipality, state, or nation. The depth of violence is determined by the willingness of demonstrators to display and voice their opinions in support of their cause.

2-27. Counterdemonstration workgroups are a mixture of traditional and nontraditional staff proponents brought together to coordinate the resources to be employed by task force (TF) units before a potential civil disturbance. Meetings of the counterdemonstration workgroup are held on a regular basis (generally weekly) and are chaired by the Assistant Chief of Staff G3 (Operations and Plans) (G3). The following staff proponents may be involved, and others may be involved as needed: 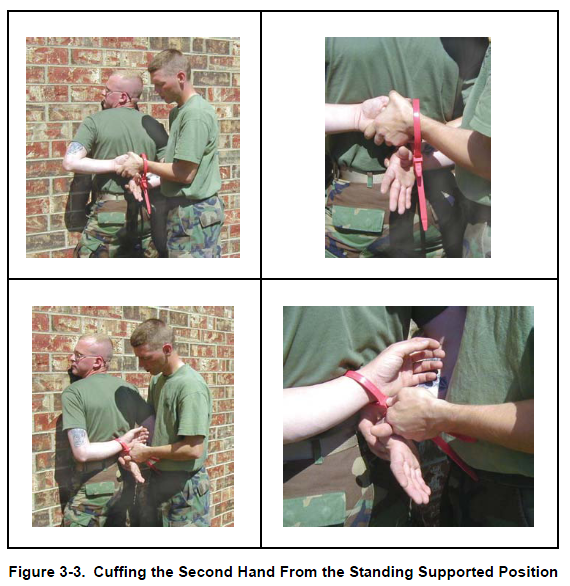 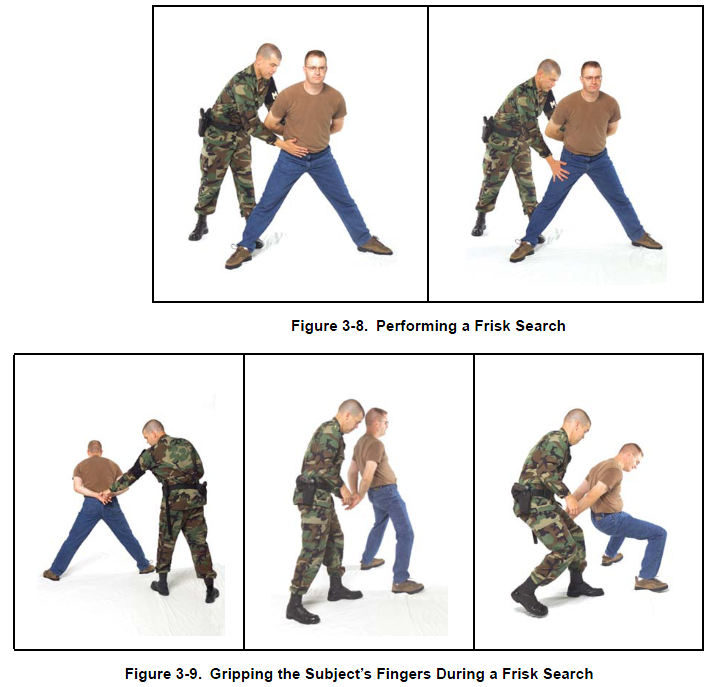 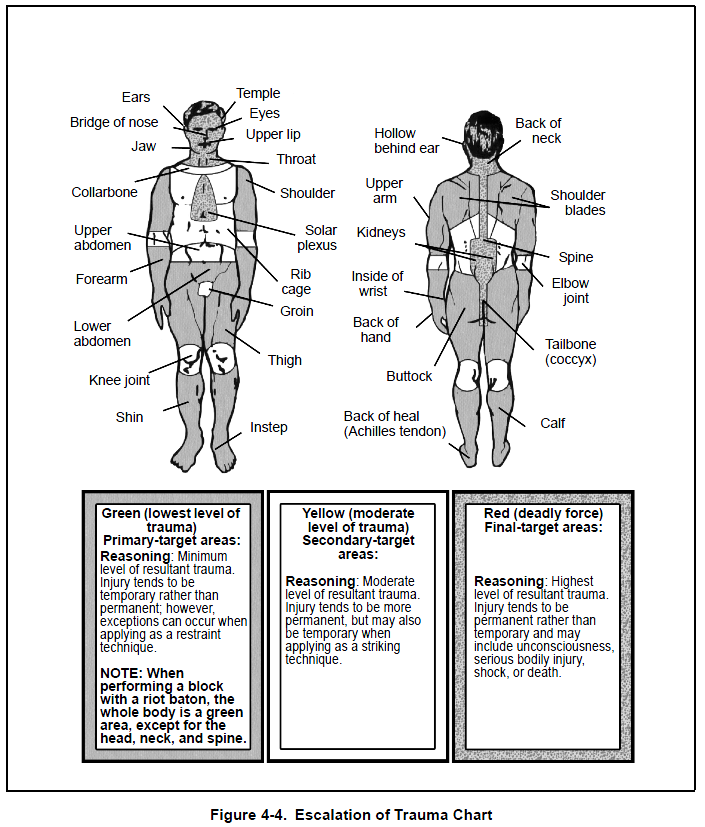 3-41. Women are detained in their own facility. Temporary facilities are supervised and controlled by officers and NCOs trained and experienced in military correctional operations. Females guard females. If two female guards are unavailable, use two male guards or one male and one female guard (see FM 3-19.40).

3-42. The same operational procedures that apply to the management of an installation confinement facility (see FM 3-19.40) apply to the management of temporary detention facilities, except for training, employment, and administrative discipline. Guards and support personnel under direct supervision and control of military officers and NCOs need not be trained or experienced in military correction  operations. They must be specifically instructed and closely supervised in the proper use of force, custodial procedures, and the completion of military and civilian forms and reports that may be used. Soldiers that may be tasked to operate a temporary detention apprehensions too.

3-43. Temporary facilities are set up on the nearest military installation or on suitable property under federal control. Ideally, the facility should be close enough to the disturbance area to minimize transportation and escort needs. However, it should be far enough away not to endanger those being detained. Whenever possible, existing structures are adapted for this use, but construction may be needed to provide segregation for ensuring effective control and administration.

3-44. The basic structure must include the following:

For more information on these structures see FM 3-19.40.

3-45. Facility personnel must ensure that proper sanitation is maintained. When large numbers of people are detained or processed through a facility, sanitation becomes a problem. Medical personnel must conduct regular health inspections to detect unsanitary practices and conditions.

3-46. Facilities must be organized for a smooth flow of traffic. Processing stations must be set up so there is a linear or circular sequence of movement. These stations are set up out of sight of the holding areas. If possible, they are separated by a door to reduce noise. To reduce distractions, each station may be partitioned. Detainees may be more cooperative if they are out of sight of each other.

3-47. Injured people are given prompt medical treatment and transportation to medical facilities when necessary. A medical aid station for screening detainees and treating minor injuries is set up inside or next to the detention facility. Treatment areas, however, must be out of sight of the processing and holding areas. If possible, access to the medical facility bypasses the holding and processing areas. Facility personnel may also consider setting up a separate holding area for injured detainees.

3-48. Detention facility operation plans must contain emergency procedures. As a minimum, the following areas must be addressed:

NOTE: Depending on the situation, other emergency procedures may be needed.

3-49. Upon arrival at the detention facility, the detainee is logged in and searched, regardless of whether a complete search has already been conducted by the apprehending team in the field. Separate search areas are set up for men and women. Weapons, contraband, flame-producing devices, suspected evidence, money, and high-value items are confiscated. Medications are also confiscated. Medical personnel screen detainees that have had medications confiscated. Receipts are provided for any property or evidence that is confiscated. Confiscated items are tagged, and the items are stored in a controlled-property area.

3-50. As a detainee is brought to the facility, a file is initiated. Assigned detainee case numbers are used on all paperwork, such as logs, evidence tags, reports, and visual documentation. All paperwork (including photographs) that began outside the detention facility is marked with the case number.  Facility personnel may also use hospital identification tags. Using indelible ink, the case number is written and attached to the tag on the detainee’s wrist. Different colors may be used to identify different subject classifications, such as misdemeanors, felonies, or violent offenders. If opposing factions are involved, procedures are established to ensure that members of opposing factions are not processed together or detained in the same holding area.

3-51. After a detainee has been searched and classified, he is taken to a processing station where his paperwork is processed. If subjects passively resist by going limp, they may be moved by wheelchair. This reduces the number of escorts needed and the fatigue to facility personnel. Paperwork is reviewed to ensure that all information is complete, including charges, witnesses, and reasons for the apprehension.

3-52. Equipment such as height charts, scales, fingerprinting equipment, and cameras must be available for completing the police report and identifying the subject. Detainees may use aliases and not carry identification, so pay special attention to obtaining as much information as possible about the detainee’s physical characteristics.

3-53. After processing is complete, the detainee is placed in the appropriate holding area. Paperwork for the detainee is forwarded to the administrative section. Files are reviewed for completeness and to determine the disposition of the detainee. Information from the file may be placed in a computer to find repeat subjects. Computers may be used to file criminal information only.

3-54. Custody transfers and release procedures must be coordinated with civil authorities and the appropriate legal counsel. Every effort must be made to arraign subjects quickly. The purpose of a detention facility is not to keep people off the streets, but to aid in processing subjects through the legal system. To speed up the release process, planners should consider issuing citations or subpoenas for minor offenses.

3-55. Military force members may have to respond to writs of habeas corpus. Writs are court orders addressed to a prisoner’s custodian. Such a writ directs the custodian to bring the prisoner to court to determine the legality of the prisoner’s apprehension and detention. Custodians must ensure that all documentation concerning the case is brought to court with the detainee.

3-56. Military personnel must obey writs issued by federal courts. For writs issued by a state court, the custodian or his legal advisor should respectfully reply that US authority is holding the prisoner. The Office of the SJA can answer any questions and explain the correct procedures.