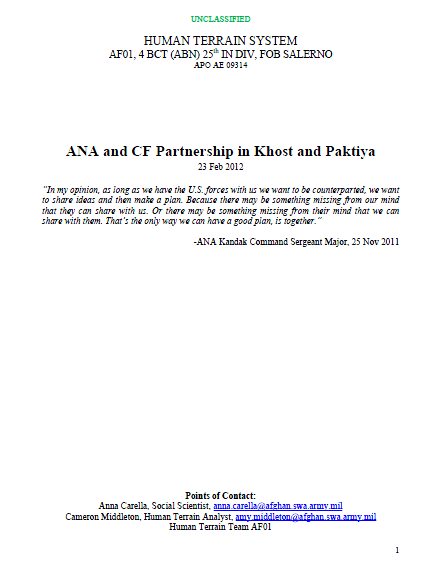 ANA and CF Partnership in Khost and Paktiya

(U) Members of Human Terrain Team AF01 embedded with a U.S. cavalry squadron from November to December 2011. Our goal was to understand the dynamics that influence partnering between the Afghan National Army (ANA) and Coalition Forces (CF) and how those dynamics impacted ANA effectiveness in gaining the Afghan population’s support. We conducted 22 interviews with U.S. Army personnel, including U.S. enlisted Soldiers and officers, U.S. troop commanders, police trainers, and ANA mentors. In addition, we conducted 21 interviews with high- and low-ranking ANA enlisted Soldiers and officers and Afghan police officers. We accompanied U.S. forces on non-kinetic missions to villages throughout Khost and Paktiya to gather perceptions from the Afghan civilian population. We also distributed a survey to three U.S. Cavalry companies (N=57). These data, along with research from secondary sources, informed the findings presented in this paper.

(U) A recent study by Bordin (2011)2 has drawn attention to “green on blue” hostility. While we acknowledge that his findings are probably an accurate reflection of Soldier views, we disagree with his conclusion that CF and ANA may be “culturally incompatible.” Instead, we are very optimistic that with the right training and leadership, cultural barriers can be overcome. Partnership, if correctly executed, can combine the strengths of Afghan and CF units such that each partner benefits from, and is bolstered by, the other. Afghan National Security Force (ANSF) development can become a force multiplier, not a trade-off, in efforts to defeat the insurgency. While our study, like Bordin’s, does highlight some uncomfortable truths about partnership, we hope that as much as we have criticized current efforts, we have equally acknowledged the challenges facing Soldiers at all levels, and provided helpful solutions that begin to address how these can be overcome.

Three factors: Motivation, Training, and Dependence begin to explain variation in ANA performance. Closer partnership can increase CF understanding of these factors, and more. Increased understanding is needed in order to improve ANA performance and readiness for transition. The squadron with whom HTT embedded prioritized ANA development but faced at least two key obstacles that could not have been overcome without external intervention or support:

1. Due to geographic separation of headquarters, they could not benefit from regular Afghan contributions to their planning processes. This created an asymmetric relationship, with U.S. unilateral planning driving the vast majority of operations.

2. A focus on ANA deficiencies in meeting U.S. expectations, due to metric reporting that ignores Afghan knowledge of and interactions with the human terrain, led them to overlook uniquely Afghan strengths that could have improved their planning process. Existing CF measurement instruments, such as the Commander’s Unit Assessment Tool (CUAT) and the Tactical Conflict Assessment and Planning Framework (TCAPF), provide indicators of ANSF performance and effectiveness, but both lack reporting on population perceptions of the ANSF and are therefore incomplete measures of ANSF’s effectiveness in counterinsurgency. This deficiency in data collection should be addressed. Initial findings indicate that CF and Afghan perceptions do not match up when it comes to views of the ANA and the Afghan police. CF rate the police as more professional, but Afghans favor the ANA. This is a reflection of CF preferences for police tactics and frustration with ANA unwillingness to use CF warfighting tactics, such as searching homes or religious buildings for weapons caches. HTT’s assessment of COP Wilderness found that success lay in a combination of clear guidance, metrics to provide accountability, and regular assessments, along with a shared mission. At COP Wilderness, the U.S. Troop Commander recognized the benefits of partnered training, operations, and social activities.

(U) Recommendations: Collocating partnered units is the single most critical adjustment to current operations that would vastly improve opportunities for partnering. Give CF a better idea of “what right looks like” in their pre-deployment training. Create metrics to measure the quality and closeness of partnership and include them in Soldiers’ regular reporting to incentivize them to improve current efforts. Because ANSF is on the frontline of building public confidence in the Afghan government, we recommend the rapid development of better metrics to measure both partnership and ANSF effectiveness. CF should track population perceptions in order to ensure that their measures of performance and effectiveness resonate with Afghans. Better incorporate Afghan input into CF planning. By this we mean not just obtaining Afghan buy-in to a CF plan, but inserting their ideas, especially those regarding the human terrain, into the planning process. In this way, CF can leverage the ANA’s strengths—knowledge of, and legitimacy with, the Afghan population—rather than focusing on improving their weaknesses. Leverage the ANA’s knowledge of the human terrain, knowledge of the local culture, and lessons about how to shift operations to being more population-centric. CF training and joint operations with the ANSF should be tailored to address the issue of ANSF legitimacy and the population’s perception of the ANSF’s ability to improve security and stability.