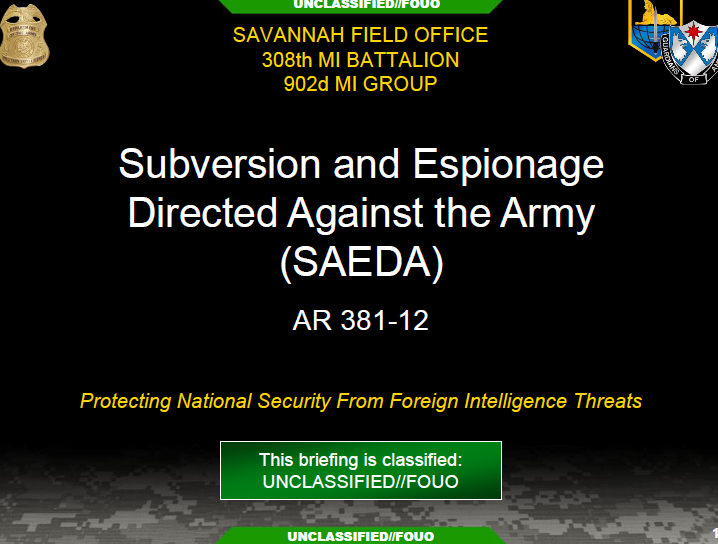 1. Directed by Army Regulation 381-12, titled Subversion and Espionage Directed Against the Army (SAEDA)”

2. Directs “all members of the Army, Military and Civilian, be knowledgeable of their reporting responsibilities under this regulation… This has been mandated by the President of the United States in National Security Decision Directive 197”

3.Requires that all Army Personnel Receive a Current SAEDA Briefing at least on an Annual Basis 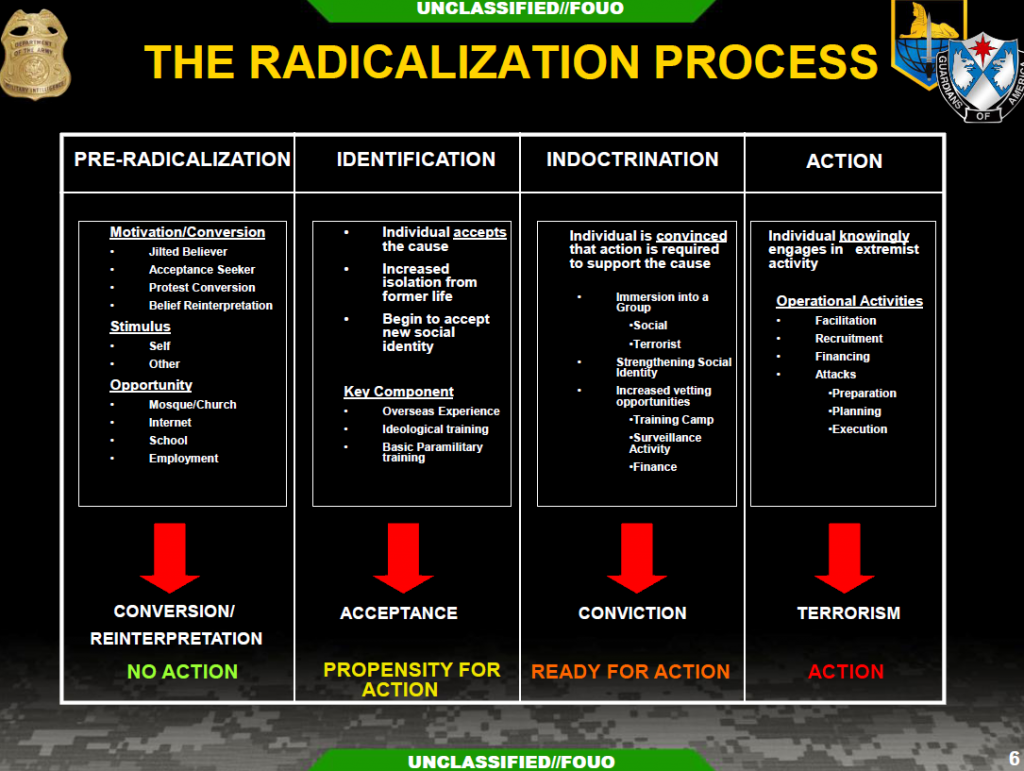 PRE-RADICALIZATION
Pre-Radicalization is Largely Influenced by Internal and External Factors Unique to the Individual. There are Four Distinct Motivations:
–Jilted Believer –Internal Frustration and Dissatisfaction with the Current Belief System Leads to a Change in Belief Systems.
–Belief Reinterpretation –The Individual Alters his Belief System through Introspection and Evaluation.
–Protest Conversion –Stems from Economic, Social, or Political Deprivation that Leads to a Change of Belief Systems as a Solution to the Deprivation.
–Acceptance Seeking –Individuals with Weak Social Ties Seek the Solidarity and Sense of Belonging that Extremist Groups Provide.

1.Advocating Violence, the Threat of Violence, or Use of Force to Achieve Goals that are Political, Religious, or Ideological in Nature.

3.Providing Financial or Other Material Support to a Terrorist Organization or to Someone Suspected of Being a Terrorist.

4.Association with or Connections to Known or Suspected Terrorists.

5.Repeated Expression of Hatred and Intolerance of American Society, Culture, Government, or Principles of the U.S. Constitution.

6.Repeated Visiting or Browsing of Internet Websites that Promote of Advocate Violence Directed Against the United States of U.S. Forces, or that Promote International Terrorism or Terrorist Themes without Official Sanction in the Performance of Duties.

7.Expressing an Obligation to Engage in Violence in Support of International Terrorism or Inciting Others to do the Same.

8.Purchasing Bomb Making Materials or Obtaining Information about the Construction of Explosives.

•Be Observant & Attentive
•Remember Details about People, Places, Conversations, and Vehicles (Including License Plate Numbers)
•Act Non-Committal and Ask for Time to Think Over Any Offers
•Report the Incident Only to US Army Intelligence Special Agents