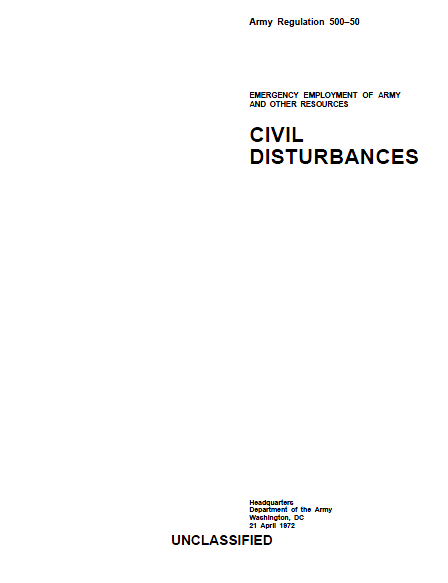 CIVIL DISTURBANCES: EMERGENCY EMPLOYMENT OF ARMY AND OTHER RESOURCES

This regulation prescribes responsibilities, policy, and guidance for the Department of the Army in planning and operations involving the use of Army resources in the control of actual or anticipated civil disturbances. Basic authority is contained in DOD Directive 3025.12, Employment of Military Resources in the Event of Civil Disturbances.

a. Civil authorities are those elected and appointed public officials and employees who constitute the governments of the 50 States, District of Columbia, Commonwealth of Puerto Rico, US possessions and territories, and political subdivisions thereof.
b. Civil disturbances are group acts of violence and disorders prejudicial to public law and order within the 50 States, District of Columbia, Commonwealth of Puerto Rico, US possessions and territories, or any political subdivision thereof. The term civil disturbance includes all domestic conditions requiring or likely to require the use of Federal Armed Forces pursuant to the provisions of 10 USC chapter 15.
c. Federal property is property owned, leased, possessed, or occupied by the Federal Government.
d. Federal function is any function, operation, or action, carried out under the laws of the United States, by any department, agency, or instrumentality of the United States or by an officer or employee thereof.
e. The Posse Comitatus Act (18 USC 1385) prohibits the use of the Army and Air Force to execute local, State or Federal laws, unless authorized by the Constitution or act of Congress.
f. An objective area is the city or other geographical location where a civil disturbance is occurring or is anticipated, and where Federal Armed Forces are, or may be, employed.

In addition to the provisions of the Constitution and other basic legal principles, there are numerous statutes authorizing the employment of Federal Armed Forces in cases of violence, or for other specific purposes, within any State and within the territories of the United States. The possibility of employment under many of these provisions is considered remote, and only those instances where employment is most likely are treated in this paragraph. Additional constitutional and statutory provisions are cited in paragraph 2-2.

a. To aid State civil authorities at the request of the State. Article IV, section 4, of the Constitution makes it the duty of the Federal Government at the request of the legislature of any State (or of the Governor if the legislature cannot be convened), to protect the State against domestic violence. Congress has enacted legislation authorizing the President to utilize Federal Armed Forces for this purpose. See 10 USC 331, 3500.
b. To enforce Federal authority. Article II, Section 3, of the Constitution makes it the duty of the President to see that the laws of the United States are faithfully executed. Congress has implemented this provision by providing that whenever the President considers that unlawful obstructions, combinations, or assemblages, or rebellion against the authority of the United States, make it impracticable to enforce the laws of the United States in any State or territory by the ordinary course of judicial proceedings, he may utilize such Federal Armed Forces as he deems necessary to enforce those laws or to suppress the rebellion. See 10 USC 332,3500.
c. To protect the civil rights of citizens within any State. The 14th Amendment of the Constitution forbids any State to deny equal protection of the laws to any person within its jurisdiction. In implementation of this provision and of Article II, Section 3, mentioned above, Congress has provided that whenever insurrection, civil violence, unlawful combinations, or conspiracies in any State so oppose, obstruct, or hinder the execution of the laws of the State, and of the United States, as to deprive any of the population of that State of rights, privileges, and immunities named in the Constitution and secured by laws, and the authorities of that State are unable, fail, or refuse to provide such protection, it will be deemed a denial by that State of the equal protection of the laws. Thereupon, it becomes the duty of the President to take such measures, by intervention with Federal Armed Forces, or by other means, as he deems necessary, to suppress such disturbances. See 10 USC 333, 3500.

It is unlikely that situations requiring the employment of Federal Armed Forms during civil disturbance operations will necessitate the declaration of martial law. When Federal Armed Forces are employed in the event of civil disturbances, their proper role is to support, not supplant civil authority. Martial law depends for its justification upon public necessity. Necessity gives rise to its imposition; necessity justifies its exercise; and necessity limits its duration. The extent of the military force used and the legal propriety of the measures taken, consequently, will depend upon the actual threat to order and public safety, which exists at the time. In most instances, the decision to impose martial law is made by the President, who normally announces his decision, by a proclamation, which usually contains his instructions concerning the exercise of martial law and any limitations thereon. However, the decision to impose martial law may be made by the local commander on the spot, if the circumstances demand immediate action, and time and available communications facilities do ad permit obtaining prior approval from higher authority (para. 2-4). Whether or not a proclamation of martial law exists, it is incumbent upon commanders concerned to weigh every proposed action against the threat to public order and safety so that the necessity therefor may be ascertained. Except in the limited circumstances mentioned in paragraph, 2-4, when conditions requiring the imposition of martial law arise, the military commander at the scene will so inform the Army Chief of Staff, and await instructions (exempt report, para 7-2o, AR 335-15). When Federal Armed Forces have been employed in an objective area in a martial law situation, the population of the affected area will be informed of the rules of conduct and other restrictive measures the military is authorized to enforce. These normally will be announced by proclamation or order and will be given the widest possible publicity by all available media. Federal Armed Forces ordinarily will exercise police powers previously inoperative in the affected area, restore and maintain order, insure the essential mechanics of distribution, transportation, and communications, and initiate necessary relief measures.